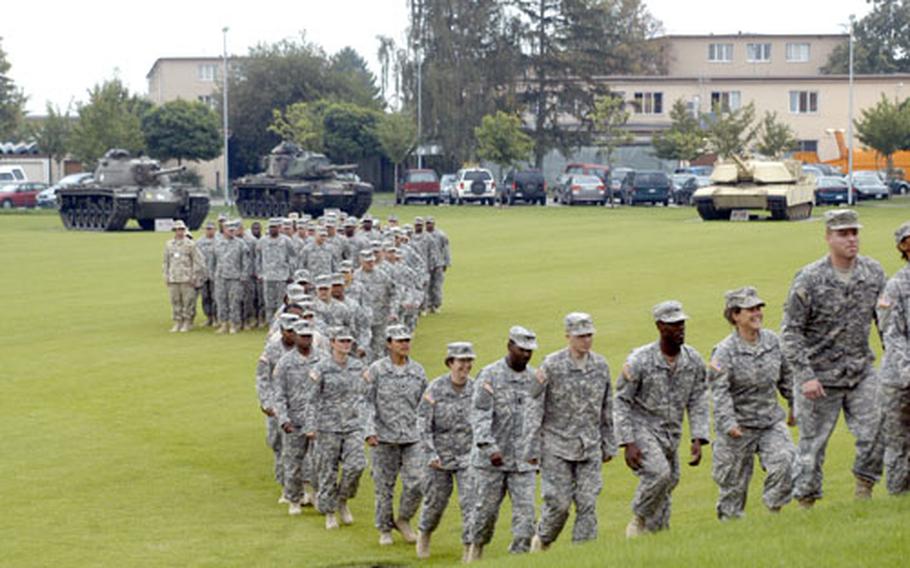 A half-day removed from Kuwait, members of the 3rd Corps Support Command file into the old gymnasium on Wiesbaden Army Airfield in Germany for a brief welcome home ceremony on Monday. (Eric Brandner / S&S)

A half-day removed from Kuwait, members of the 3rd Corps Support Command file into the old gymnasium on Wiesbaden Army Airfield in Germany for a brief welcome home ceremony on Monday. (Eric Brandner / S&S) 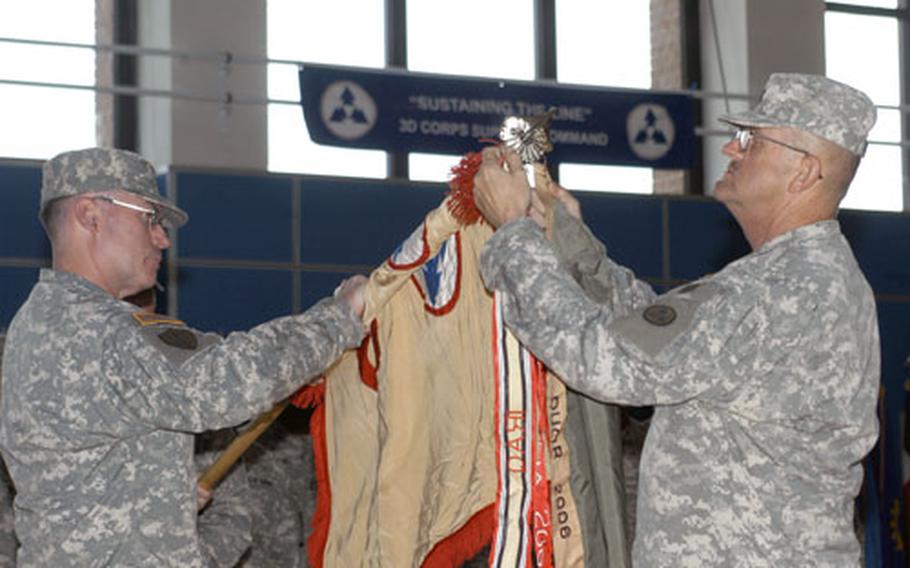 &#8220;Twelve hours ago, I was in dirty, dusty Kuwait getting bitten by sand flies, and now I&#8217;m back home,&#8221; Youngblood said Monday as she glanced out across Wiesbaden Army Airfield.

Much has changed since the 3rd Corps Support Command departed for Iraq and Kuwait a year ago, both personally and professionally.

Some of the returning soldiers, for example, looked surprised at how much the little ones have grown.

Other changes are around the bend, too, especially on the business side.

Twelve months from now, the 3rd COSCOM, as an organization, will be garrisoned back in the United States, while elements of it will have been peeled off and sent elsewhere.

The relocation and related changes are all part of the ongoing realignment of U.S. forces.

&#8220;Transformation is in full swing and plans to transition command and control of many 3rd COSCOM units over to the 21st Theater Support Command are solidifying,&#8221; Col. Martin Pitts, 3rd COSCOM&#8217;s rear detachment commander, wrote in a unit publication last month.

&#8220;This change in structure and the accompanying transition of many of the 3rd COSCOM units into a modular force structure consumes much of the focus for FY &#8217;07,&#8221; he noted.

For some in the command, the effects of transformation will hit home as early as next week, when the 7th Corps Support Group formally shifts from the 1st Armored Division to the 21st Theater Support Command in Kaiserslautern.

Many other changes are in the offing, Brig. Gen. Rebecca S. Halstead indicated Monday.

And yet the 3rd COSCOM commander was understandably more focused on the homecoming unfolding before her than on the inevitable move to Fort Knox, Ky.

&#8220;They served faithfully and honorably&#8221; in Iraq, Halstead said as she stood on a basketball court swarming with soldiers and family members.

The command currently has 4,000 soldiers wearing its patch and scores of civilians on the payroll.

In the support arena, it handles everything from maintenance of vehicles to supplies to truck transport.