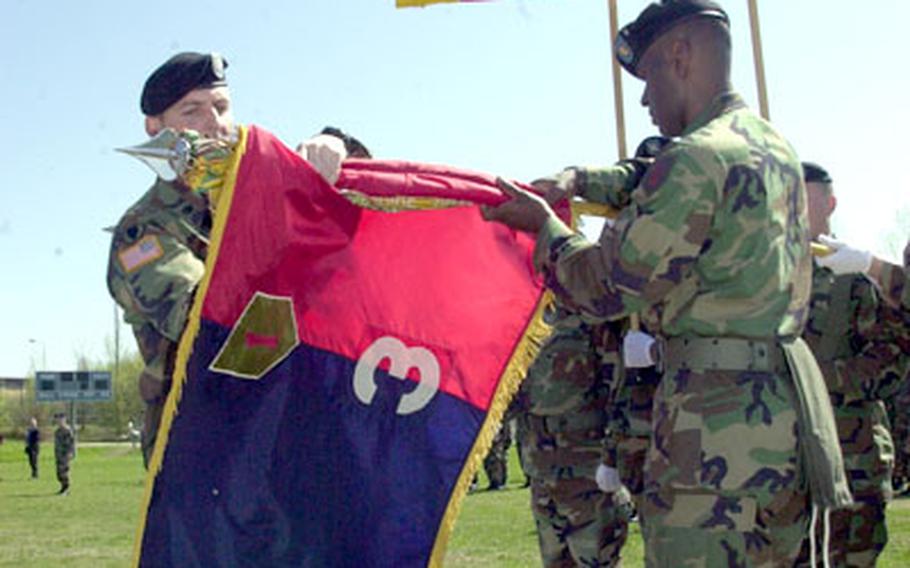 Lt. Col. Michael A. Todd, commander of the 3rd Brigade, 1st Infantry Division, left, and Command Sgt. Maj. Gregory L. Baugh case the brigade colors at Vilseck on Wednesday. The unit’s colors flew for the last time at Vilseck on Wednesday. The brigade is inactivating, but will reactivate as a light brigade combat team in Fort Knox, Ky. (Seth Robson / S&S)

The 1st ID commander announced the plans to several hundred 3rd Brigade soldiers gathered for the inactivation ceremony. That ended a decade-long mission in Germany that included deployments to Macedonia, Bosnia-Herzegovina, Kosovo and Iraq.

There are no immediate plans to reactivate 2-63, said the 3rd Brigade commander, Lt. Col. Michael A. Todd.

Hunzeker told the 3rd Brigade soldiers that since returning from a yearlong deployment to Iraq last March, they had worked hard to reduce forces, prepare to move and be ready to receive the 2nd Cavalry (Stryker) Regiment, which begins arriving in Vilseck this month.

About 300 3rd Brigade soldiers will stay at Vilseck until September to help the new arrivals from 2nd Cavalry, Lummer said.

Hunzeker said the 3rd Brigade turned in 30,000 pieces of equipment and helped more than 2,500 soldiers and their families through reassignment.

&#8220;This brigade has been the vanguard for the rest of the U.S. Army in Europe with regards to drawing down and accepting a change of mission. The lessons learned that you continue to provide the rest of the force will ensure that subsequent units will conduct even smoother transitions,&#8221; he said, referring to plans to move members of both the 1st ID and the 1st Armored Division to the U.S. over the next few years.

Lummer, 27, of Camp Point, Ill., said he is headed to the Infantry Captain&#8217;s Career Course at Fort Benning, Ga., after five years at Vilseck.

The highlights of his time here included missions to Kosovo where he got to interact with Kosovo civilians as a deputy camp mayor, and to Iraq where he worked with Iraqi soldiers as 2-2&#8217;s personnel officer.

Another 3rd Brigade soldier at the inactivation ceremony &#8212; Sgt. Jeffrey Clemins, 30, of San Diego &#8212; said he served as a mechanic with 1st Battalion, 63rd Armored Regiment at Vilseck for four years.

Clemins said he was one of 15 3rd Brigade soldiers who would move to 2nd Cav.