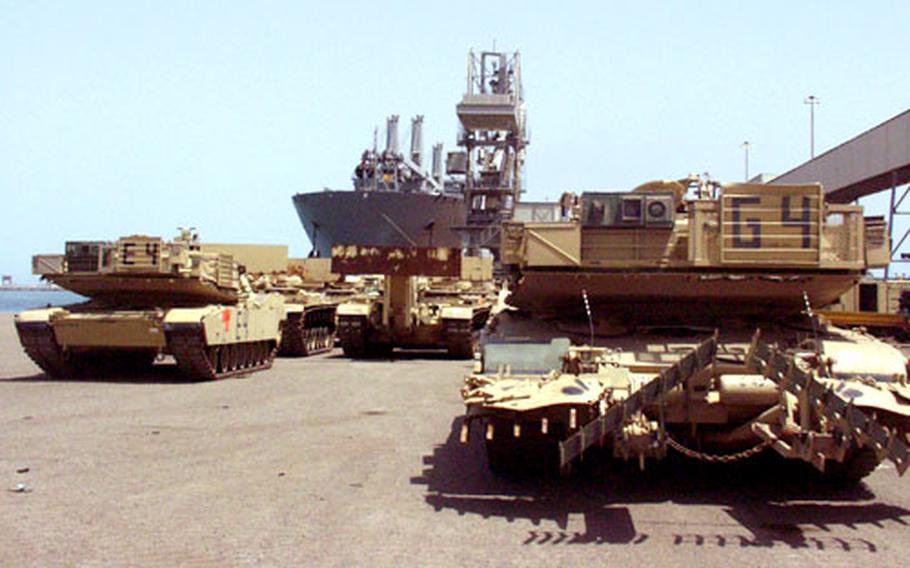 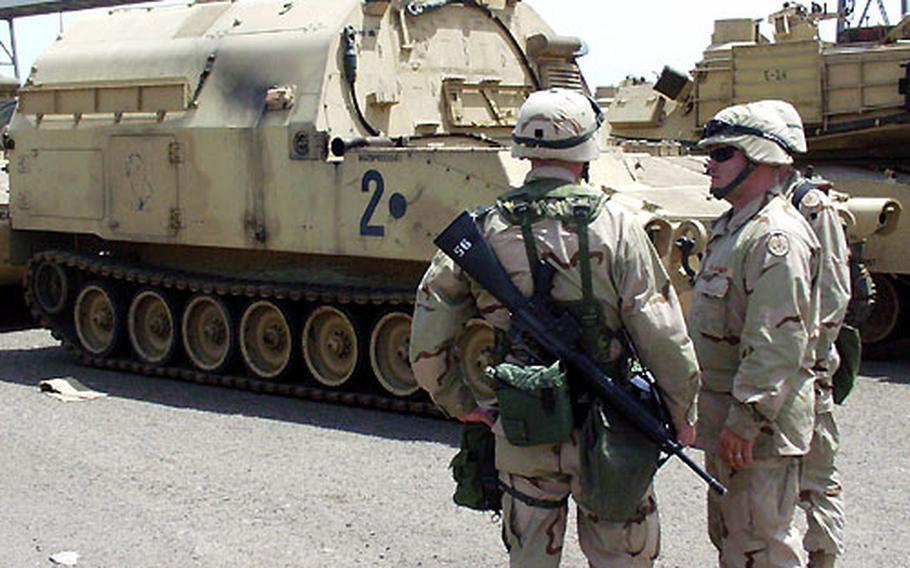 Soldiers from the 3rd Armored Cavalry Regiment from Fort Carson, Colo., stand by as heavy equipment is unloaded in Kuwait. (David Josar / S&S)

KUWAIT CITY, Kuwait &#8212; Leaders of the 3rd Armored Cavalry Regiment said they expect their role to be more akin to what the Implementation Force did in Bosnia and Herzegovina than to what other troops have done for the past month in Iraq.

In late 1995, following the war in Bosnia, NATO created an Implementation Force to put into effect a peace hammered out by the warring parties. The 3rd ACR arrived in Bosnia in 1999 after the mission had evolved into a Stabilization Force, designed to maintain the peace.

The 3rd ACR, known as the Brave Rifles, is a rapidly deployable force from Fort Carson, Colo., that does not need long supply lines to continue operations, an important factor in a desert environment, said Workman, the spokesman for the regiment.

Although the helicopters and heavy vehicles form the backbone of the regiment, Workman said the real assets will be the civil affairs personnel.

Military leaders have culled the best people to fill the positions for civil affairs, who are traditionally reservist soldiers, Workman said.

Civil affairs soldiers can network with local Iraqis, discover what they need and help coordinate the humanitarian assistance, he said.

But at the same time, 3rd ACR troops can operate checkpoints, rebuild schools, conduct security patrols and be a fully mobile fighting force, he said.

He estimated the regiment would have a battalion-sized civil affairs staff.

The unit received deployment orders Feb. 15. By the following week, most of its equipment had been loaded on railcars bound for Texas where it was put on ships headed to the Persian Gulf.

Three ships arrived this week at the port and on Monday crews began unloading the cargo.

The troops, who flew to Kuwait on commercial and chartered planes, are at a base camp in the Kuwaiti desert. All but a few of the soldiers have arrived, Workman said.

Army Chief Warrant Officer 2 Brett Hudspeth supervised as an Abrams tank maintenance team did some preventive work on one of the tracks of the gas-guzzling weapon.

He said the soldiers were trained for any task, from hunting enemy troops to patrolling a village.

When the unit is ready to go, they will not be playing the role of a conqueror, Workman said.