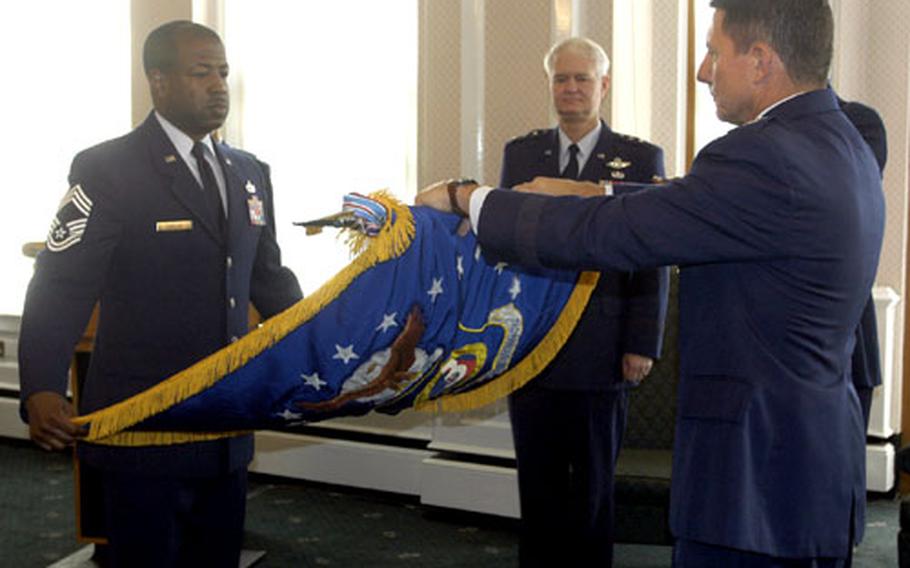 The Air Force furled the flag of its historic 3rd Air Force during a ceremony in England on Tuesday as part of a move to merge major commands in Europe and streamline contingency planning.

The inactivation of the unit at RAF Mildenhall marks the beginning of a new headquarters based at Ramstein Air Base, Germany.

The 3rd Air Force &#8212; one of two numbered air forces in Europe &#8212; has been in England for more than 50 years and has contributed to nearly every major military conflict or operation, from the Berlin Blockade after World War II to the war in Iraq.

Maj. Gen. Paul Fletcher will remain at Mildenhall and serve as vice commander of the new headquarters and the U.S. military&#8217;s senior representative to the British government.

Organizations and units responsible for planning such missions as humanitarian aid and combat operations now fall under what is called the 16th Air Force Warfighting Headquarters.

The command consists of parts of the 3rd Air Force and the 16th Air Force, which previously called Aviano Air Base, Italy, home. The headquarters will include a core of about 650 people and provide around-the-clock command and control support to deployed forces from Germany. About 100 of those airmen will be coming from England and 100 from Aviano.

In the past, the Air Force had to scramble staff members from various units to create a command-and-control headquarters for unplanned missions. It could take as long as a week to form a team to provide critical planning. With the new command, the planning staff is already set up and ready to go, said Brig. Gen. Michael Snodgrass, director of plans and programs for U.S. Air Forces in Europe headquarters at Ramstein.

In 1972, the headquarters moved to Mildenhall.

Maj. Gen. Michael C. Gould, who will assume command of 2nd Air Force at Keesler Air Force Base in Mississippi, commanded 3rd Air Force for the final 15 months. He choked back tears as he gave his speech.

&#8220;These airmen have lived, worked and dedicated themselves to everything the 3rd Air Force stands for,&#8221; he said.