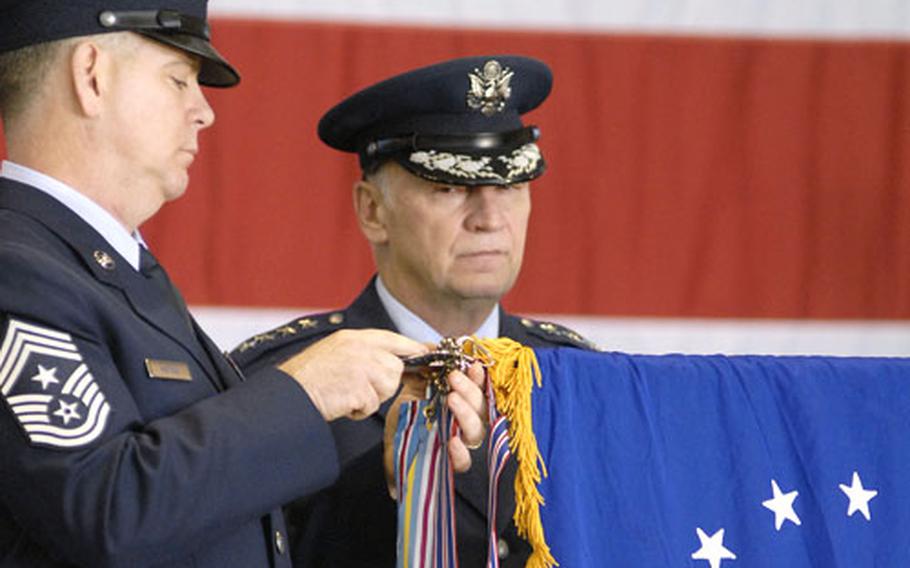 Command Chief Master Sgt. Steve Hutton, the new command chief for 3rd Air Force, unfurls the 3rd Air Force flag in front of Gen. William Hobbins, commander of U.S. Air Forces in Europe, during a formal ceremony Friday at Ramstein Air Base marking the return of the 3rd and the appointment of Maj. Gen. Robert Bishop, the former vice commander of USAFE, as its commander. (Ben Bloker / S&S)

Lt. Gen. Robert Bishop took command of the unit, which will operate from Ramstein &#8212; the Air Force&#8217;s largest military base and home to U.S. Air Forces in Europe headquarters. Bishop takes the new post after serving as vice commander of USAFE headquarters under Gen. Tom Hobbins.

Hundreds of airmen, who previously served under what was called the 16th Air Force Warfighting Headquarters, attended the ceremony.

The return of the 3rd comes just 13 months after it was deactivated as part of a reorganization effort to streamline humanitarian and combat operational planning.

The 3rd, previously based at RAF Mildenhall, England, and the 16th Air Force, which had called Aviano Air Base, Italy, home, merged last November to become the 16th Air Force Warfighting Headquarters at Ramstein.

But the 3rd&#8217;s history &#8212; it has had a hand in every major conflict since World War II &#8212; helped revive its name. Air Force Chief of Staff Gen. T. Michael Moseley wants to retain the legacy of the numbered Air Forces.

The 3rd, based in England for more than 50 years, will keep a small but high-ranking presence at Mildenhall. Maj. Gen. Paul Fletcher, formerly the 16th&#8217;s vice commander, will remain in England but serve under the 3rd and will continue to be the Air Force&#8217;s senior representative to the British government.

About 650 staff members are part of the 3rd at Ramstein.