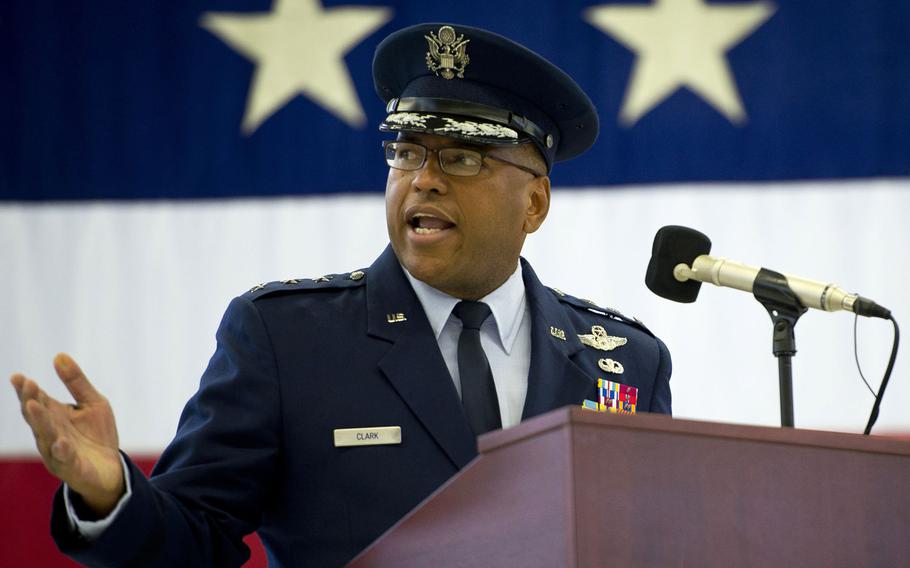 Lt. Gen. Richard Clark, 3rd Air Force commander, speaks during his change-of-command ceremony at Ramstein Air Base, Germany, in October 2016. Clark is leaving Ramstein after being nominated for assignment as deputy chief of staff, strategic deterrence and nuclear integration (Michael B. Keller/Stars and Stripes )

Clark was nominated for assignment as deputy chief of staff, strategic deterrence and nuclear integration, a position that falls under Headquarters U.S. Air Force at the Pentagon, Air Force officials said.

Congress must approve the assignment. The Air Force in 2015 elevated the job for which Clark’s been nominated from a two-star to a three-star position, underscoring service’s efforts to strengthen its nuclear enterprise leadership.

A B-1 Lancer pilot with 4,200 flight hours, Clark assumed command of 3rd Air Force in October 2016. In that job, he oversees Air Force contingency and wartime operations in Europe and Africa.

There’s no word yet on a potential replacement for Clark, Air Force officials said.