3D printing may revolutionize maintenance for the stealthy F-22 Buy Photo
A new metallic 3D printed part sits alongside the aluminum part it will replace inside the cockpit of an F-22 fighter jet during depot repair at Hill Air Force Base, Utah. (R. Nial Bradshaw/Stars and Stripes)

Buy Photo
A new metallic 3D printed part sits alongside the aluminum part it will replace inside the cockpit of an F-22 fighter jet during depot repair at Hill Air Force Base, Utah. (R. Nial Bradshaw/Stars and Stripes) 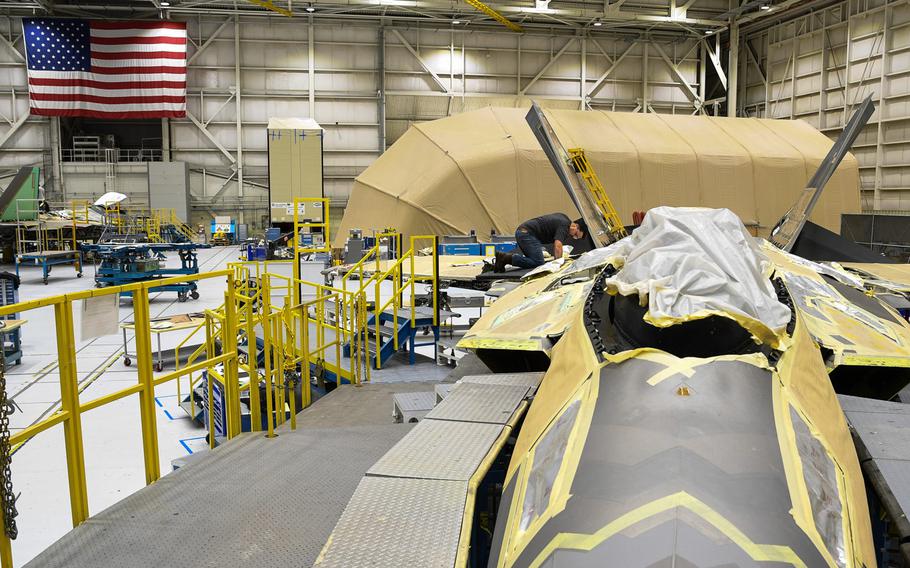 The world’s most expensive fighter jet soon may be flying with parts made from a 3D printer.

Maintainers at Hill Air Force Base, Utah, last month installed for the first time a metallic 3D-printed bracket on an operational F-22, according to the Air Force and Lockheed Martin, the company that produces the $150 million aircraft.

If the titanium piece holds up, the part will be installed on all F-22 aircraft during maintenance, and the use of 3D parts in the aircraft could be expanded, with the eventual goal of reducing depot time for the maintenance-prone jets, officials said.

“We’re looking to go a little bit further as this part proves itself out,” said Robert Blind, Lockheed Martin modifications manager, as quoted in an Air Force release.

Though a first for the stealthy F-22, harnessing 3D printing technology for use in a combat jet isn’t new among the services, which have used additive manufacturing for everything from Humvee door handles and rifle grips to gas mask modifications.

The Marine Corps last April flew an F-35B Lighting II aircraft with a part supplied by a 3D printer to replace a worn, plastic bumper on the plane’s landing gear door. The part was printed, approved and installed within a few days, eliminating a longer wait for a replacement part from the States.

Unlike the Marines’ plastic bumper, the 3D bracket in the F-22 was made using a powder bed fusion process with a laser to build the part layer by layer from a titanium powder, the Air Force said.

The printed bracket won’t corrode, it said. It replaced a corrosion-prone aluminum component in the kick panel assembly of the cockpit that is replaced 80 percent of the time during maintenance.

The Air Force said it has at least five more metallic 3D printed parts it plans to test on the F-22.

“Once we get to the more complicated parts, the result could be a 60 to 70 day reduction in flow time for aircraft to be here for maintenance,” Robert Lewin, 574th Aircraft Maintenance director at Hill, said in the statement.

The Air Force did not say how much time or money 3D printing could save in F-22 maintenance. But Lewin said the technology gives the maintainers the ability to acquire replacement parts on short notice without minimum order quantities, an issue that’s particularly challenging in the F-22 community due to the small fleet size.