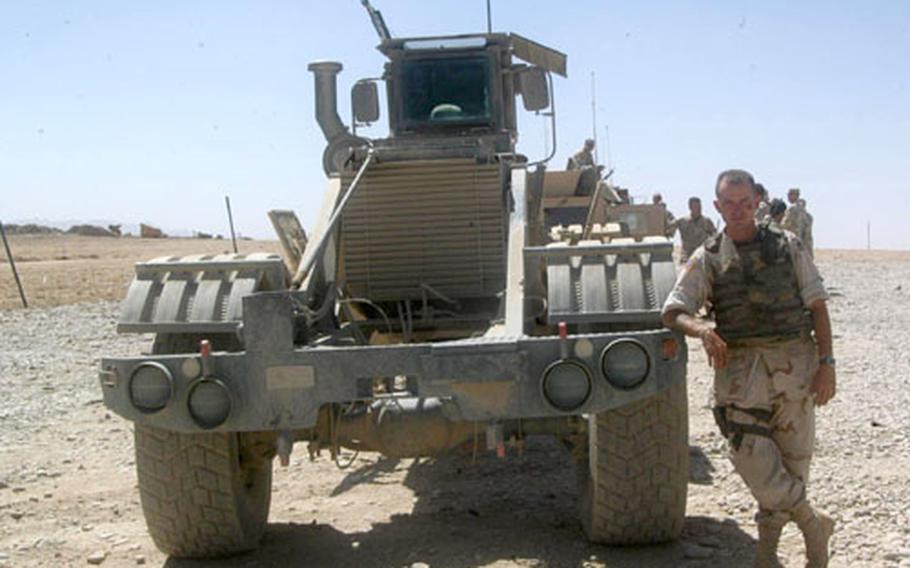 Spc. David Rhames has a love-hate relationship with the vehicle he drives in Afghanistan. The South African-made Husky looks like a cross between a tractor and a bulldozer, and isn&#39;t fun to drive. But it&#39;s proved to be good at detecting improvised explosive devices and land mines. (Kent Harris / S&S)

Spc. David Rhames has a love-hate relationship with the vehicle he drives in Afghanistan. The South African-made Husky looks like a cross between a tractor and a bulldozer, and isn&#39;t fun to drive. But it&#39;s proved to be good at detecting improvised explosive devices and land mines. (Kent Harris / S&S) 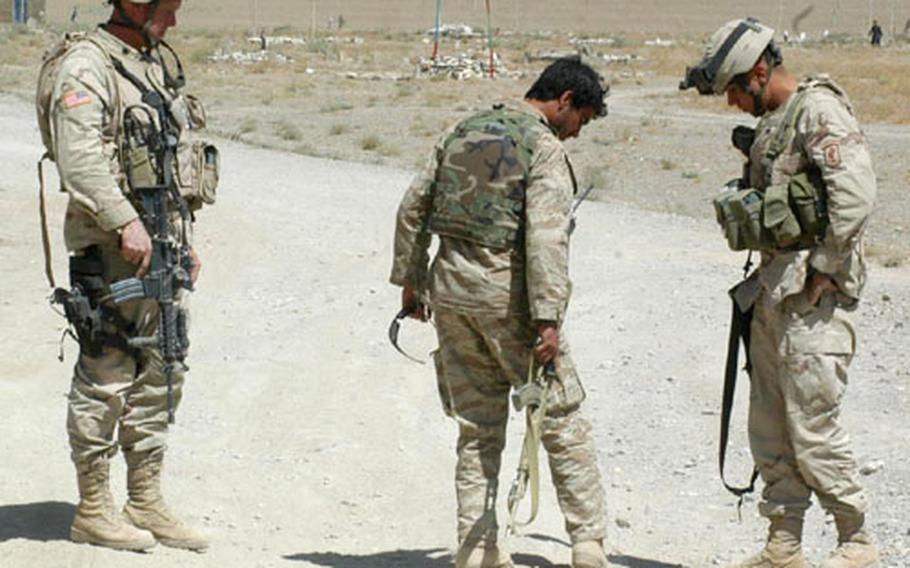 ORGUN-E, Afghanistan &#8212; Soldiers in Task Force Fury haven&#8217;t experienced a mortar or rocket attack on their bases since they&#8217;ve been in country.

Firefights are rare. So are land mines.

But that doesn&#8217;t mean there aren&#8217;t dangers on the dusty roads of Paktika province: Makeshift bombs &#8212; made famous by their use in Iraq &#8212; are the weapon of choice by those wishing to create havoc in the area.

But the bombs have &#8220;not impacted our ability to conduct missions in the least,&#8221; said the task force commander, Lt. Col. Tim McGuire.

But McGuire knows firsthand that the devices are prevalent. A remote-controlled bomb went off earlier this week just a few feet in front of his Humvee. No one was hurt, and the vehicle only had a few scratches. The driver had just slowed down, probably throwing off the timing of the person setting off the device, he said.

Other attacks have been deadly. Staff Sgt. Damion Campbell, a medic from the 1st Battalion, 508th Infantry Regiment, was riding on a patrol with combat engineers from the 173rd Airborne Brigade&#8217;s Combat Support Company when he was killed by a roadside bomb. Four others on the patrol are out of country recovering from wounds.

Payne said he&#8217;d rather get into a firefight than see another bomb go off.

Sgt. Scott Tedeton, manning the machine gun on Payne&#8217;s Humvee during a recent patrol, was riding in the front passenger seat when one of the attacks occurred. He said the bomb went off underneath the engine block, which absorbed much of the impact. The driver suffered a fractured leg, but otherwise the patrol escaped serious injury.

McGuire said the makeshift bombs are being used because anytime the enemy tries to engage in a battle, they are killed or captured. By laying down devices that explode on impact or detonating them from a ridge top as far as a few miles away they can more easily escape.

But he believes the bomb makers&#8217; days are numbered.

Heavily armored Humvees provide strong protection from explosions from the front, sides and rear. Armor doesn&#8217;t do as good a job protecting explosions underneath the vehicle, because the blasts have nowhere to go and can&#8217;t be deflected.

That makes the role of the bomb hunters from the 391st Engineer Battalion more vital as they try to keep the roads clear. Capt. Todd Burroughs said Company B has found 15 roadside bombs in less than three months in the area. The Reservists from South Carolina spend much of their time traveling up and down the roads, looking for the devices with some high-tech help.

First, there&#8217;s the South African-built Husky, which looks like a cross between a tractor and bulldozer. It leads the convoys and finds mines with the help of a pair of metal-detecting plates that cover the width of most roads.

Steering isn&#8217;t easy, and the booth can get hot, he said. But the next vehicles in line, either the Buffalo or smaller RG-31, are more uncomfortable to ride in, company first sergeant Carl Gehring said.

The 26-ton Buffalo, made in South Carolina, looks like a sport utility vehicle on steroids. Its job is to remove the bomb via a mechanical arm after the Husky spots it.

McGuire said the biggest hope for ending the threat is the local citizenry. He said reports of roadside bombs to American forces have increased dramatically in recent months. Afghan residents have two big incentives to make such reports: The bombs that explode on impact are just as likely to kill Afghans as Americans and areas that have persistent problems with roadside bombs get less funding for projects than neighboring communities.

So those making and placing the devices increasingly have to operate not only beyond the sight of American and Afghan security forces, but from their own neighbors.