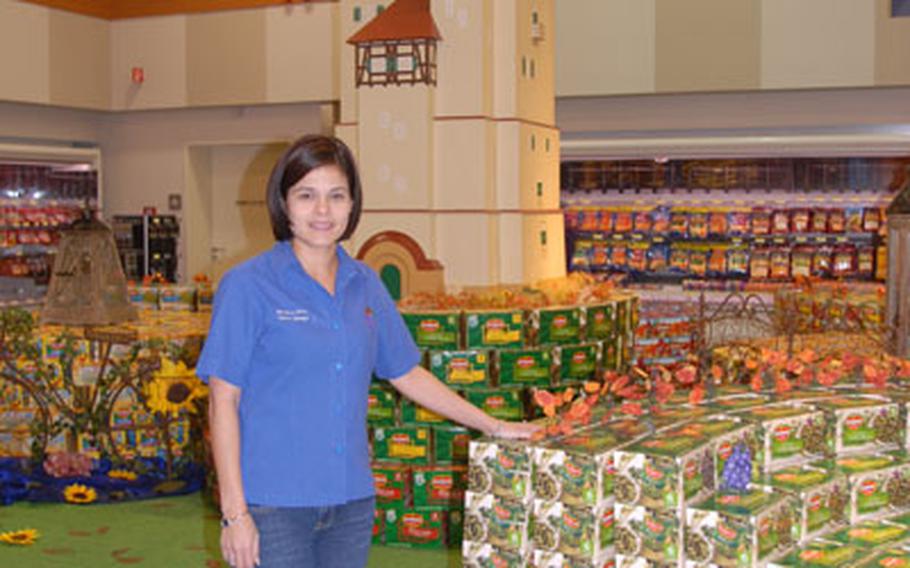 Marilyn Eller, a grocery manager from the Wiesbaden commissary, created this display at the new Grafenwohr commissary centered around a giant model of the famous Grafenwohr tower. (Seth Robson / S&S)

GRAFENW&#214;HR, Germany &#8212; Shoppers are eagerly awaiting the opening Wednesday of a $38 million Post Exchange/Commissary &#8212; an event that highlights the base&#8217;s transformation from a small, isolated training area to the Army&#8217;s premier facility in Europe.

Matt Mennona, AAFES&#8217; Grafenw&#246;hr consolidated exchange manager, described the opening of the shopping complex &#8212; to be jointly operated by the Defense Commissary Agency and the Army and Air Force Exchange Service &#8212; as the most significant event in Grafenw&#246;hr in modern times.

This year the U.S. population at Grafenw&#246;hr, which used to include just 1,200 soldiers, more than doubled with the arrival of units from other parts of Germany where the Army is downsizing.

Within a few years the base will be home to 4,500 active-duty soldiers and 7,000 family members, according to Suzanne Bartsch, spokeswoman for Efficient Basing Grafenw&#246;hr.

Stephanie Burns, manager of the new PX, expects customers to be impressed by items such as the store&#8217;s Apple computer section and its large range of big screen televisions, which will be discounted on opening day.

There will be a range of other discounts and specials across the store on opening day, including figurines featuring Grafenw&#246;hr&#8217;s iconic water tower, she added. A miniature version of the tower forms the centerpiece of a large display at the new commissary, which will offer 10,000 product lines &#8212; more than twice as many as in the base&#8217;s old store.

The $14.2 million supermarket includes 27,337 square feet of floor space compared with 6,366 at the old commissary.

Grafenw&#246;hr commissary director Chudri Najdawi said the new supermarket has plenty of local touches including German and Italian foods that will be available for sampling, alongside American items, on opening day.

Several hundred invited guests will tour the PX/Commissary on Tuesday night, he said.

Gerri Young, DeCA Europe public affairs officer, said the Tuesday tour will include a &#8220;shopping spree&#8221; by two members of the community who will grab as much food as possible during a timed run through the store. The value of the things they collect will be donated to an on-post charity, she said.

Opening day will feature a 30-minute ceremony starting at 9 a.m. followed by ribbon-cutting. After that, the stores will be open for business, she said.