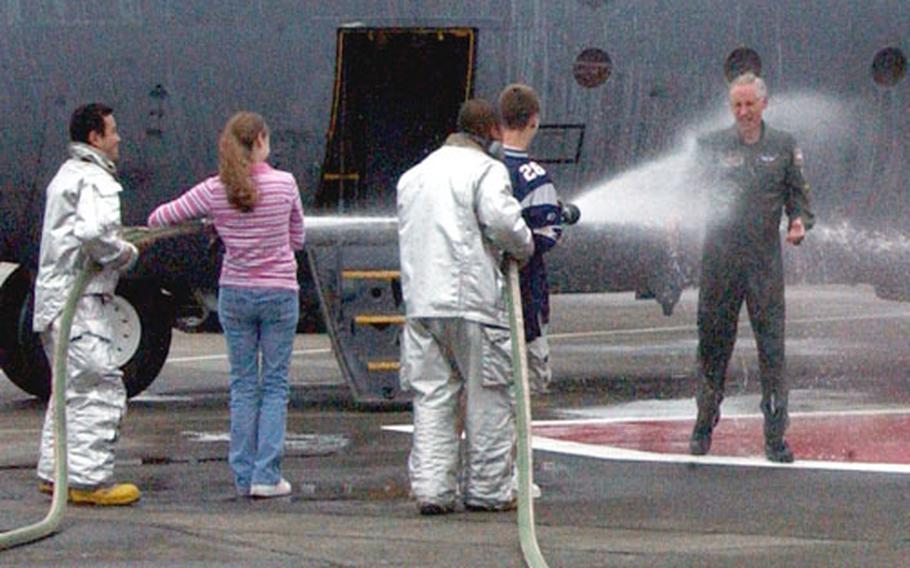 Col. Mark Schissler, the 374th Airlift Wing commander, is "hosed down" after his final C-130 flight at Yokota Air Base, Japan, on Tuesday. (Kaori Matsukasa / Courtesy of U.S. Air Force)

Col. Mark Schissler, the 374th Airlift Wing commander, is "hosed down" after his final C-130 flight at Yokota Air Base, Japan, on Tuesday. (Kaori Matsukasa / Courtesy of U.S. Air Force) 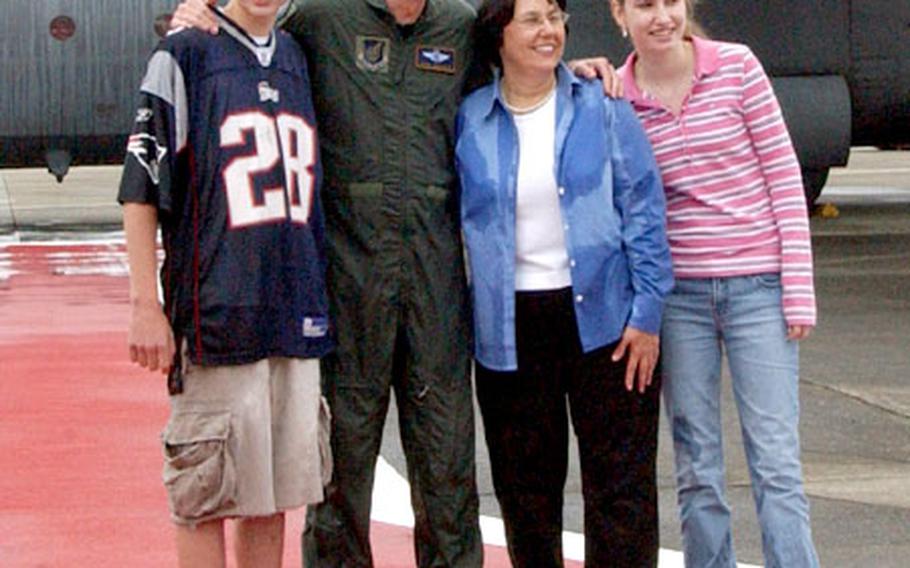 YOKOTA AIR BASE, Japan &#8212; Citing an impeccable inspection record, solid contributions to the war on terrorism and a batch of community-driven projects and accomplishments, Col. Mark Schissler said he believes the 374th Airlift Wing distinguished itself within the Pacific theater over the past two years.

&#8220;I wanted to have one of the best wings in the command. ... A wing that drew respect from the other wing commanders in (Pacific Air Forces) and I believe we achieved that,&#8221; said the departing 374th Airlift Wing commander, who conducted his final C-130 flight at Yokota on Tuesday morning, then received the traditional post-flight &#8220;hose down.&#8221;

Joined afterward by his wife, Marcia, and two children, he greeted friends and media on the flight line and later led airmen on an invitational run &#8212; all part of a daylong farewell to the base he&#8217;s guided since July 2003.

Schissler was to turn over his leadership post to Col. Scott P. Goodwin during a change-of-command ceremony Wednesday in Yokota&#8217;s Hangar 15. He&#8217;s returning to the Pentagon, where he&#8217;ll become assistant deputy director of international negotiations for the Joint Chiefs of Staff plans and programs directorate, multilateral affairs division.

During his Yokota tenure, Schissler was a staunch proponent of building U.S.-Japan relations. &#8220;Cooperation with local governments and communities has never been better,&#8221; he said.

Within the service&#8217;s Aerospace Expeditionary Force cycle, Yokota troops filled key support roles in the war on terror, deploying to Iraq and Afghanistan. Schissler said that would continue, with about 100 airmen slated to leave this summer and up to 350 more heading out within the next year.

But his tenure wasn&#8217;t without turmoil. Dealing with misconduct by airmen and their families &#8212; both on and off base &#8212; was his greatest challenge, he said: &#8220;Some were really painful issues with some tough decisions that I had to make as the commander.&#8221;

That included imposing a 1 a.m.-6 a.m. restriction for &#8220;Bar Row,&#8221; a popular entertainment district in nearby Fussa City, following a string of incidents involving the base&#8217;s airmen.

The Yokota stint was his first as a permanent wing commander. He said he&#8217;d welcome another opportunity in the future.