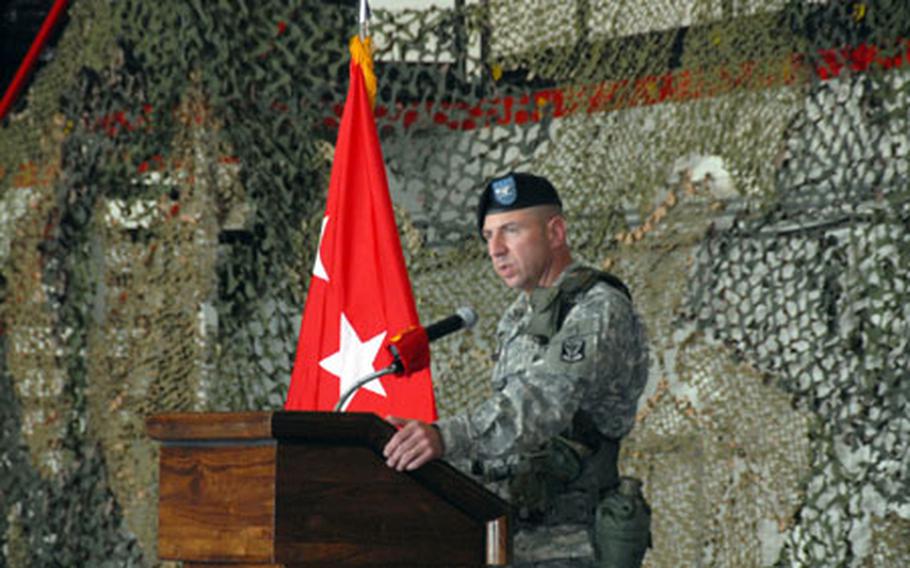 Col. John Rossi, outgoing commander of the 35th Air Defense Artillery Brigade, speaks Tuesday during a change of command ceremony at Osan Air Base. He is being replaced by Col. James Dickinson. (Ashley Rowland / S&S)

OSAN AIR BASE, South Korea &#8212; The leader who guided an Army Patriot missile brigade for the past two years said goodbye to his troops Tuesday during a change-of-command ceremony at Osan&#8217;s Black Cat hangar.

Rossi led the 35th Air Defense Artillery Brigade, which began deploying to South Korea in 2004 and has undergone several changes since.

He said his biggest accomplishment in South Korea has been keeping the readiness of his troops high.

The hardest part of the job, he said, was losing two soldiers &#8212; one who was injured in a vehicle accident last summer and died in December, and another who was struck by lightning in Gwangju in June 2006.

Col. Rossi traveled to Arizona to be with the soldier&#8217;s family after his death in the lightning storm.

Capt. Steve Curtis, who has worked under Rossi since January, said he is straightforward and direct &#8212; a leadership style that occasionally ruffles feathers, but motivates people to work, Curtis said.

Rossi will become chief of staff at Fort Bliss, Texas.