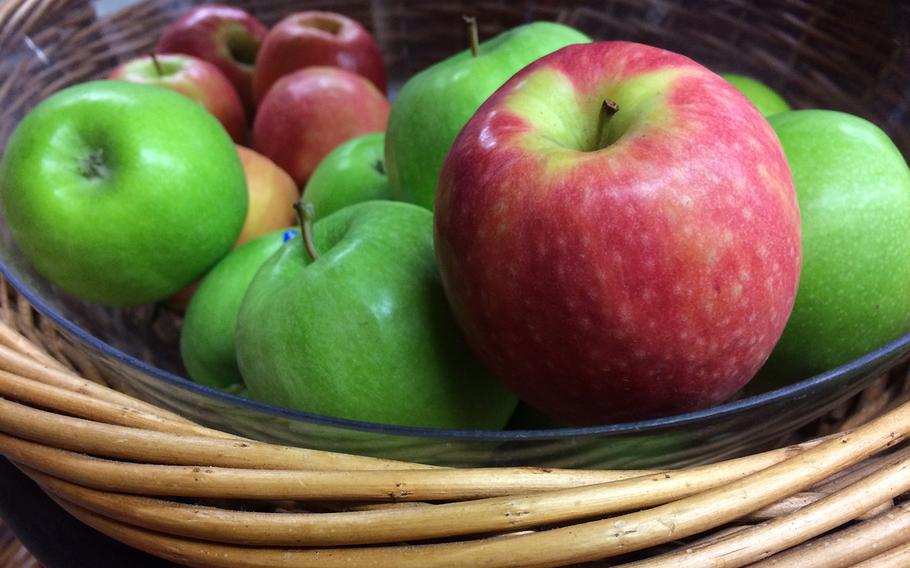 Buy Photo
Kaiserslautern police are investigating allegations from U.S. military members who say they were ripped off by door-to-door fruit and vegetable salesmen in the Ramstein area. (Ann Pinson/Stars and Stripes)

Buy Photo
Kaiserslautern police are investigating allegations from U.S. military members who say they were ripped off by door-to-door fruit and vegetable salesmen in the Ramstein area. (Ann Pinson/Stars and Stripes) Kaiserslautern police are investigating allegations coming from American military members who posted on Facebook that they were ripped off by door-to-door fruit and vegetable salesmen in the Ramstein area. (File)

KAISERSLAUTERN, Germany — German police are investigating claims that a group of men scammed servicemembers and spouses in the Kaiserslautern area by charging hundreds of euros to credit cards for boxes of fruit sold door-to-door.

The men sell produce out of a van and distract customers while swiping credit cards for far more than the produce should cost, according to several posts from a private military spouses Facebook group. A July 15 post garnered hundreds of comments and detailed accounts of the sales going back at least two years.

Michael Hummel, a Kaiserslautern police spokesman, said one report has been filed so far from a possible victim.

“We just started the investigation,” Hummel said Monday. “It is too early to say if this was a case of usury. We can say that the woman bought a lot of fruits and vegetables but she also paid a lot.”

Police began the investigation after Stars and Stripes notified them about the Facebook comments. Hummel said they are tracking a license plate number posted in the Facebook group and have identified at least one suspect.

Air Force Staff Sgt. Samara Brown, 29, said she was conned by the men in July.

Brown was busy taking care of her baby when a man arrived at her door.

The man said her neighbor told him she would be interested in buying some fruit. When she tried to buy a couple of apples, he asked how much fruit she ate a month and started “dancing around” with lots of other questions.

“I was like, ‘I don’t really want any apples,’ but at that point I wanted to buy something from him so he would go away,” she said.

She went outside with the man, and when she asked how much all the fruit would cost, “he just starts throwing these crazy numbers out and I lost track of things,” Brown said.

The man brought the fruit inside her house. She gave him her credit card, which she said he swiped through a machine while distracting her with conversation.

“I just felt so uncomfortable,” Brown said. “I just wanted him out of my house.”

Brown posted her ordeal to the Ramstein/KMC Spouses group and found she wasn’t alone.

One commenter said she was charged 270 euros for about $30 worth of apples and potatoes.

Megan Perry, an Air Force wife, said she was almost scammed but remembered the Facebook group.

Perry said there were two men involved. When she tried to walk around their vehicle, one of the men blocked the license plate from view.

“I had my suspicions anyway, but I even asked him what I could get for five euros and he said they only took cards, and that confirmed it for me,” Perry said.

Brown said that the investigation showed her the power of community.

“It makes me feel amazing and it makes me wonder what if I had never pushed anything?” she said. “It just shows you the power of unity.”

Door-to-door sales require a special business license. Customers should ask to see the license, though fakes are difficult to spot, Decker said.