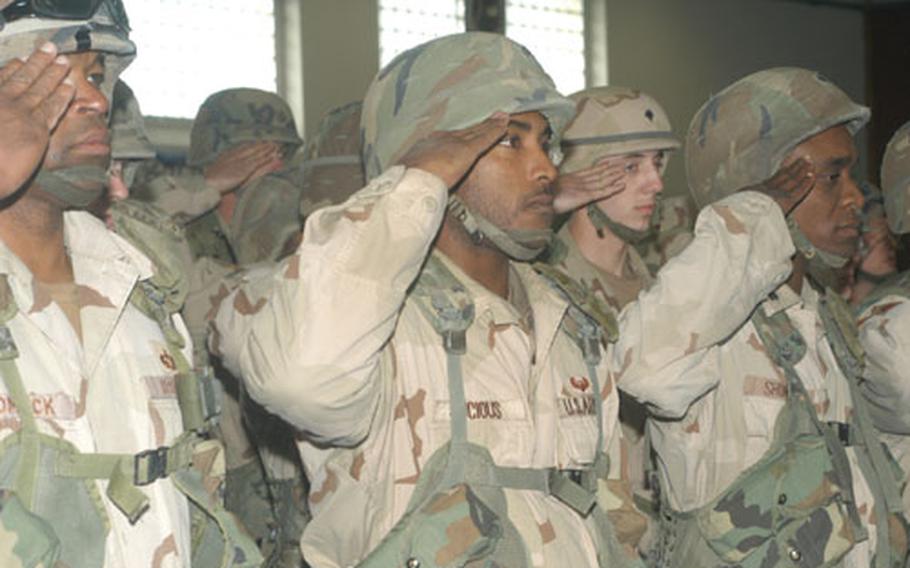 Troops from Company C, 32nd Signal Battalion, salute to the national anthem as they arrive home from a yearlong deployment from Iraq. (Jessica Inigo / S&S)

Troops from Company C, 32nd Signal Battalion, salute to the national anthem as they arrive home from a yearlong deployment from Iraq. (Jessica Inigo / S&S) 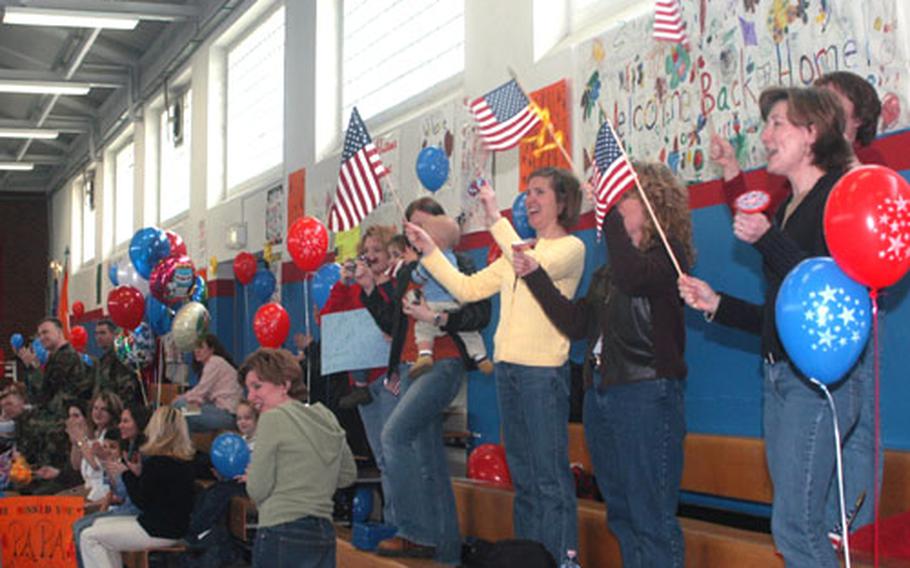 Family members and friends cheer the homecoming of Company C, 32nd Signal Battalion. Some Company A and D troops also came home with the Company C after a yearlong deployment. (Jessica Inigo / S&S)

DARMSTADT, Germany &#8212; Smiles gave way to tears as troops from the 32nd Signal Battalion saw their families and friends for the first time in a year Thursday morning.

About 70 troops, mostly from Company C, marched into the gym on Kelley Barracks after a yearlong deployment that had them setting up communications throughout Iraq. The desert-clad troops stood proudly before family and friends while flags and red, white and blue noisemakers spun frantically throughout the crowd.

Though spouses and children remained on the edge of their seats to hear the &#8220;dismissed&#8221; for what seemed like an eternity, it came only minutes later by 1st Sgt. Lee Stevens.

The floodgates opened and family members and troops raced into each other&#8217;s arms.

&#8220;You smell, but I missed you,&#8221; said one wife bearing with the desert sweat and stench still on uniforms just to get a hug and a kiss.

Even Lt. Col. L.J. Strife, 233rd Base Support Battalion commander, got teary-eyed as troops got reacquainted with their family members.

Pacheco said though the separation was tough, it helped her to become more independent. She said it was nice to have him back and out of harm&#8217;s way.

&#8220;I was on the phone with him one day ... and I heard alarms going off in the background. My husband said there was a missile headed toward them and that he had to hang up to take cover. I was so scared, I was shaking,&#8221; Diana Pacheco said.

Now, with him in front of her giving hugs to their son, Eugene Jr., and sneaking kisses from their daughter, Leslie, 1, she felt better.

All of Company C has returned, as well as soldiers from Companies A and D. On Wednesday night, troops from the 578th Signal Company, 440th Signal Battalion, returned home.

More troops are expected throughout the month, base officials said.