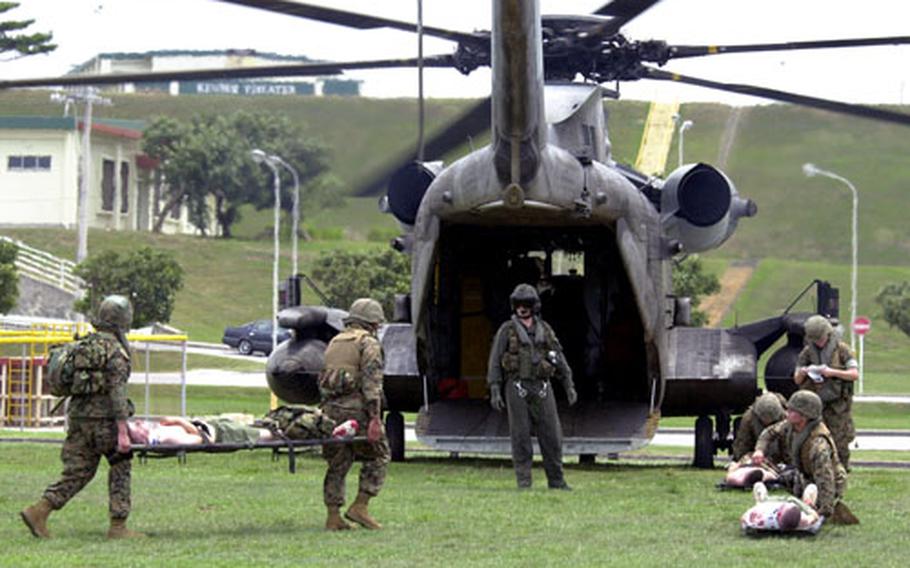 Navy corpsmen assigned to the 31st Marine Expeditionary Unit’s MEU Service Support Group 31 carry a mock patient to the back of a waiting CH-53 helicopter during a medical drill on Camp Kinser, Okinawa, on Monday. The corpsmen are part of a “Nightingale Team.” (Fred Zimmerman / S&S)

Navy corpsmen assigned to the 31st Marine Expeditionary Unit’s MEU Service Support Group 31 carry a mock patient to the back of a waiting CH-53 helicopter during a medical drill on Camp Kinser, Okinawa, on Monday. The corpsmen are part of a “Nightingale Team.” (Fred Zimmerman / S&S) 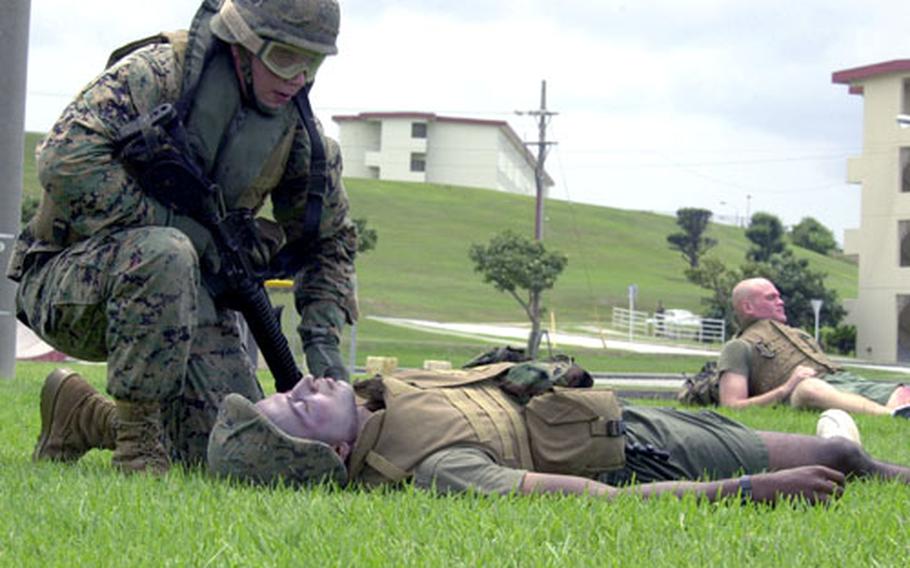 A Marine checks the "injured" for booby traps just after the arrival of the "Nightingale Team" during Monday’s exercise. (Fred Zimmerman / S&S) 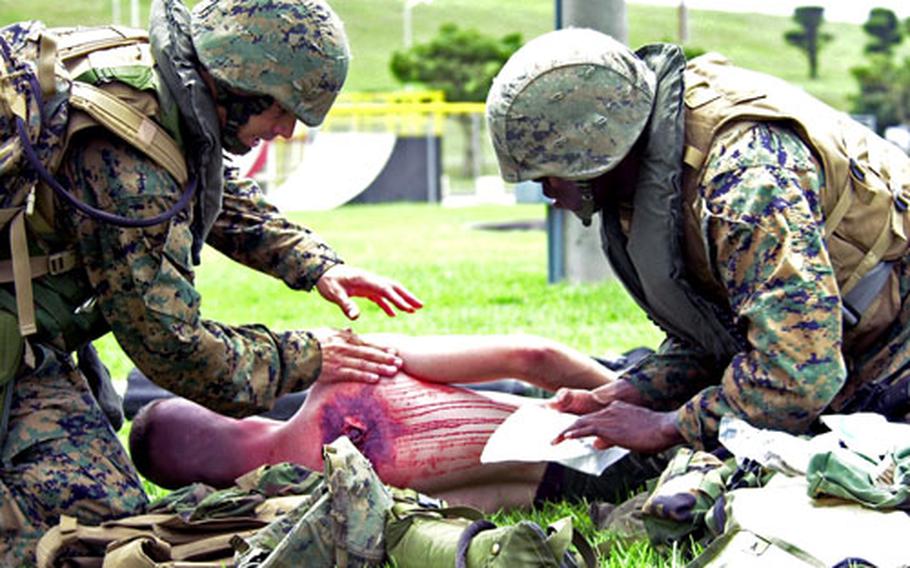 A Navy corpsmen yells to communicate with a fellow corpsman as he tends to a patient sitting just behind a noisy CH-53 helicopter. (Fred Zimmerman / S&S)

CAMP KINSER, Okinawa &#8212; Marines here Monday encountered something in a drill that&#8217;s an everyday reality in Iraq and other war zones.

Within minutes, two helicopters &#8212; a CH-53 and CH-46 &#8212; swooped from the sky carrying help. Marines quickly shuffled off the helicopters and secured the area. After one Marine checked the bodies of the injured for booby traps, he signaled in the medical team. Running to the wounded carrying stretchers and bags of medical equipment, the team quickly assessed patients and began treatment.

While the event was only a drill, it was designed to test the response of the &#8220;Nightingale Team&#8221; from the Health Services Support Platoon of MEU Service Support Group 31, part of the 31st Marine Expeditionary Unit.

Grimm said the team&#8217;s primary role is to be &#8220;sent in where something happened that overwhelmed the medical team on the scene.&#8221; He said the team can deploy within minutes and travel via any mode of transportation.

Once team members arrive on scene, Grimm said, the Marines set up a perimeter and secure the area, including checking the injured for booby traps. Once the medical personnel get the signal to enter the area, Grimm said, they perform as much triage as possible &#8212; including on enemy combatants, if necessary &#8212; categorizing the patients.

The team then must move the patients to the waiting transportation &#8212; in Monday&#8217;s case, the helicopters. Petty Officer 2nd Class James Hill, a veteran on the team who observed Monday&#8217;s drill, said that&#8217;s an area the team will have to work on.

Grimm agreed that the corpsmen did well, especially since many are new to the Navy and Monday was their first time around helicopters.

Grimm said leaders would review the exercise with the team, including what areas need work. He said the exercise will be repeated in several weeks to provide more experience.