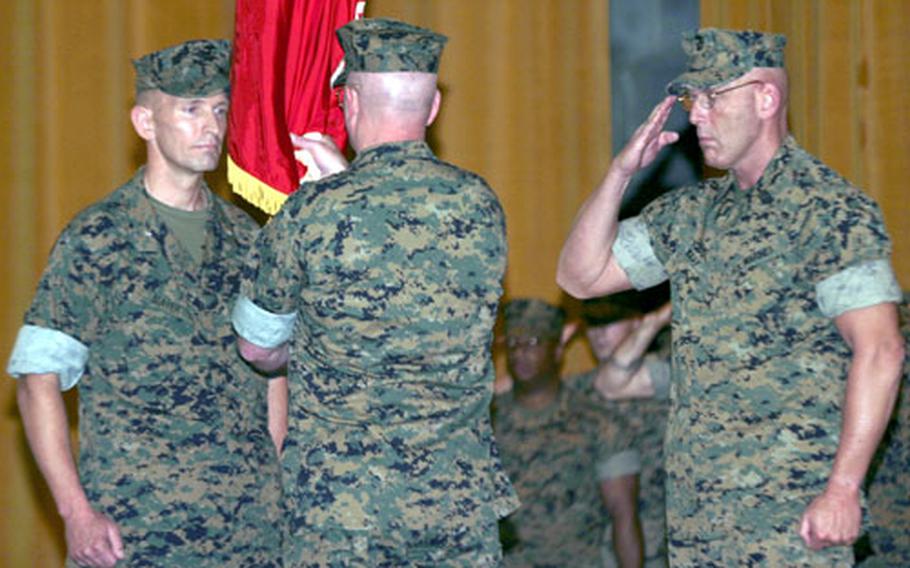 Col. Walter L. Miller Jr. hands the 31st Marine Expeditionary Unit colors to Col. John L. Mayer, left, during a change of command ceremony at the base theater at Camp Hansen on Thursday. Mayer, a Dallas native, assumed command over the unit. Miller will transfer to U.S. European Command as the assistant chief of staff. (Kamran Sadaghiani / U.S. Marine Corps)

CAMP FOSTER, Okinawa &#8212; Col. Walter L. Miller Jr. has led the Marines of the 31st Marine Expeditionary Unit through combat, relief operations and training, but on Thursday it was time to say goodbye.

Miller, who took command of the unit in May 2004, relinquished command to Col. John L. Mayer in a ceremony at Camp Hansen in which Miller received the Bronze Star for meritorious achievement in support of Operation Iraqi Freedom II.

During Miller&#8217;s tenure, the unit participated in combined and bilateral training exercises in Guam, the Philippines, South Korea and Thailand.

In February, while participating in Balikatan &#8217;06, the unit was diverted to the Philippines for humanitarian assistance and disaster relief in the wake of deadly mudslides.

That was one of the highlights of his time with the 31st, Miller said, along with the unit&#8217;s deployment to Iraq in August 2004.

Miller will transfer to the U.S. European Command as the assistant chief of staff.