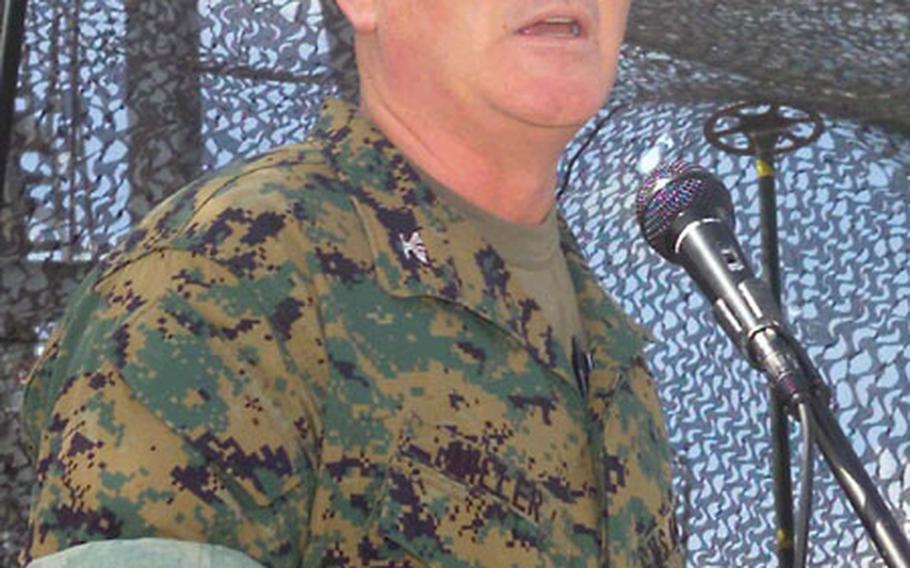 Marine Col. Walter L. Miller became commander of the 31st Marine Expeditionary Unit (Special Operations Capable) during a cermony aboard the USS Essex in Thailand May 27. (Courtesy of U.S. Marines)

The change of command was held Thursday aboard the USS Essex after a two-day port visit in Thailand at the tail end of Cobra Gold 2004, according to a 31st MEU press release.

Miller, a Mesquite, Texas, native, comes from a chief of staff position at the 4th Marine Division in New Orleans. Arnold is bound for Marine Corps Air Station at Miramar, Calif., where he will assume duties as chief of staff for the 3rd Marine Air Wing.

&#8220;I appreciated the opportunity to be part of this organization and to have helped lead the 8,000-plus Marines and sailors who have comprised the 31st MEU during the last four cycles,&#8221; Arnold said during a ceremony on the ship&#8217;s flight deck. &#8220;The role of the MEU here in Asia is important and does make a difference.&#8221;

Miller, 46, said mission readiness and personnel safety would be among his priorities as the unit&#8217;s new commander. He said the MEU will continue to aggressively pursue a heightened state of readiness and awareness.

&#8220;I will continue to stress that the backbone of our organization is the noncommissioned officer and with that comes the inherent responsibility of leadership,&#8221; Miller said. &#8220;The bottom line in combat is they are the ones that take that last 100-meter fight to the enemy. We will continue to strive to perform to the standards set by those that have gone before.&#8221;

He said the 31st MEU had an outstanding reputation that he will see it retains.

As commander of the 2nd Battalion, 2nd Marine Regiment, Miller participated with the unit as a battalion landing team, seeing action in Kosovo, the Horn of Africa and last year as part of Operation Iraqi Freedom. Among his decorations are a Meritorious Service Medal (Gold Star), Navy Commendation Medal and Navy Achievement Medal.