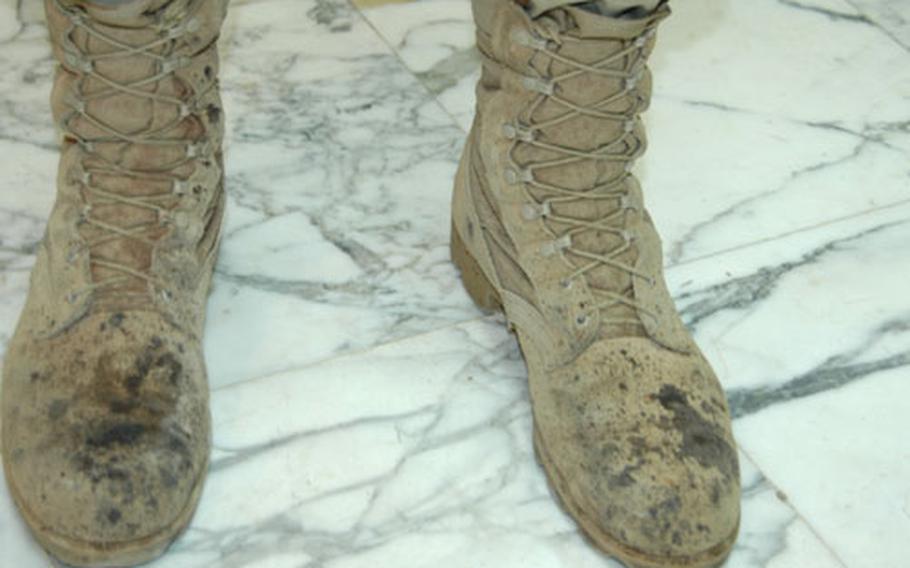 To get a read of what&#39;s happening, "take a look at people&#39;s boots," says the hospital&#39;s executive officer, Lt. Col. Steve Smith. These are the boots of Maj. John Hammock, chief of the emergency room. (Anas Dulami / S&S)

To get a read of what&#39;s happening, "take a look at people&#39;s boots," says the hospital&#39;s executive officer, Lt. Col. Steve Smith. These are the boots of Maj. John Hammock, chief of the emergency room. (Anas Dulami / S&S) 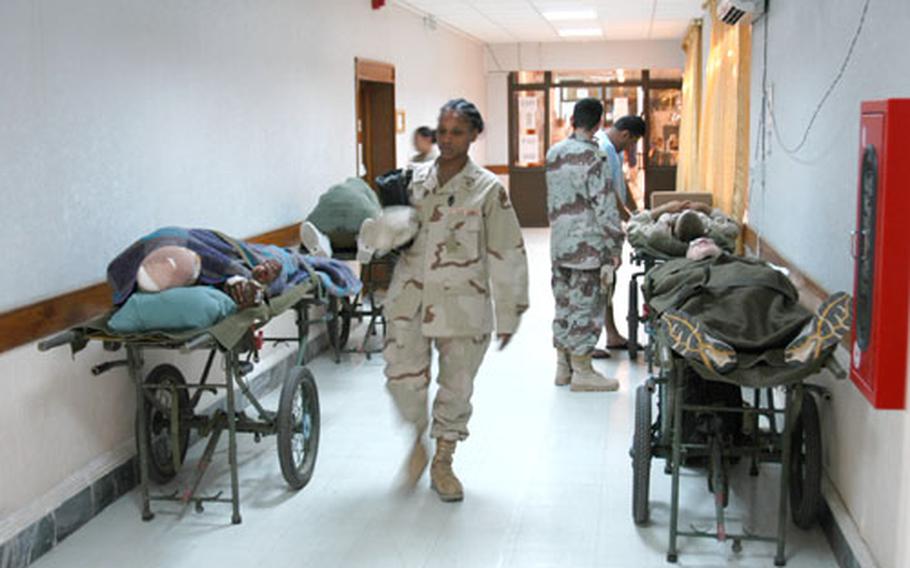 Wounded troops await their flight to Landstuhl, Germany. More than 100 are transferred from the 31st Combat Support Hospital after treatment each week. (Anas Dulami / S&S) 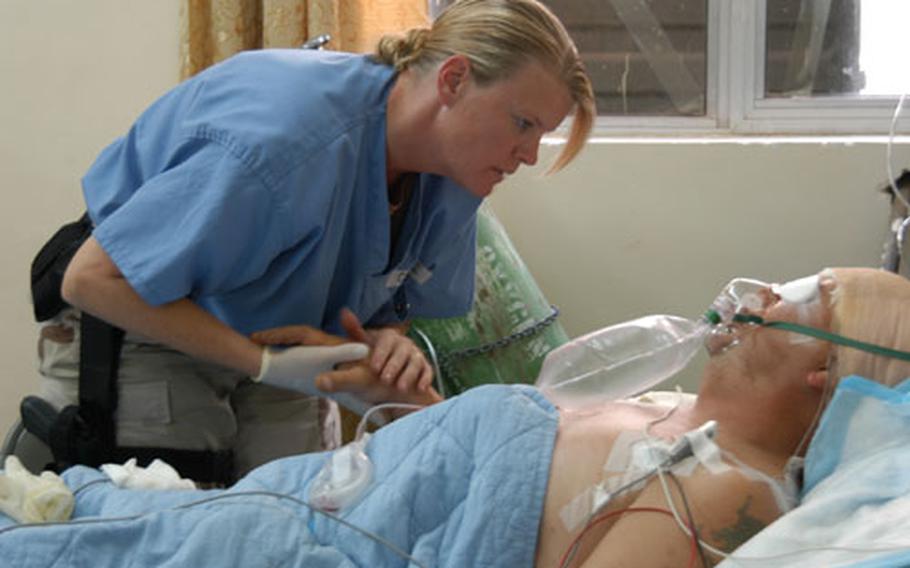 Capt. Rhonda White comforts a U.S. Navy Seabee who was wounded in a mortar attack and just had his breathing tube removed. White has been working at the hospital for more than a year. (Anas Dulami / S&S)

He remembers fire exploding in his face, being pulled from his burning Humvee and put aboard the chopper that brought him to this hospital room. He remembers pain: he never lost consciousness, until doctors anesthetized him to amputate his left leg below the knee.

No, said Wessam Fadhel, 21, who joined the Iraqi Civil Defense Corps four months ago, he never imagined things would turn out this way. Three U.S. soldiers died in the roadside bomb attack that maimed him, he says. Tears seep from the corners of his eyes.

A few rooms over, Pfc. Christopher Bebo, 20, is recovering from a collision with a truck full of bricks that sheared his Humvee in half. He has a broken collarbone, a fractured kneecap and a torn bicep, and no memory at all of the crash &#8212; or even the past two months he&#8217;s spent in Iraq.

An Iraqi woman in a black hajib one floor down has brought her son to visit the ophthalmologist. Mohammed, 6, was playing last year in south Baghdad when he stepped on a cluster bomb. It exploded, destroying his right eye and peppering his small face with scars. Now doctors here have agreed to surgically repair what damage they can, and his mother is grateful. &#8220;I love America,&#8221; Nooriga Salih says in English. &#8220;I love you.&#8221;

In the intensive care unit, servicemembers lie silent and sedated, their breathing aided by respirators. They were hit by roadside bombs, mortars and, for one, a tank gun barrel that swung around while he was driving past atop his Humvee. The barrel smashed squarely into his face and shattered every single bone.

Every day, patients come off the helicopters and through the doors of the CSH (pronounced &#8220;cash&#8221;) in an unending stream of such terrible injuries that, in former wars, they would surely have died.

The hospital staff has worked long hours and saved many young lives. But it has taken a toll.

In April, when violence began flaring with insurgents, and a record number of 140 U.S. troops were killed, the CSH staff bore the brunt of saving the many more who were wounded.

According to the Department of Defense, 1,073 troops were wounded in action in April. About half were returned to duty within 72 hours, the DOD says. Much of the other half went by stretcher to the CSH.

Maj. John Hammock, who heads up the emergency room, wears some of the worst-looking boots in the CSH, stained black with the blood of hundreds of servicemembers that have come through his ER.

He was working on a soldier with a gunshot wound to his arm &#8212; in the ER, because the wait for the operating room was long.

The CSH is a small building compared to most U.S. hospitals. It&#8217;s located in the coalition&#8217;s fortified Green Zone, and is an equal-opportunity trauma center. Staff there also see many Iraqi patients, including security forces members and civilians accidentally hurt by U.S. forces. Numerous children, Hammock said, have been hit by vehicles.

The rush to save lives begins with the sound of the helicopters bringing in the wounded, sometimes just 15 minutes after they were hit. Once they&#8217;re at the CSH, the pace doesn&#8217;t slow. Troops might remain for only six hours, and are usually there no longer than 48.

As soon as servicemembers are stable, they&#8217;re flown to the military hospital in Landstuhl, Germany. More than 100 are sent from the CSH to Germany every week.

Almost always, the most horrible injuries come from the jury-rigged bombs or improvised explosive devices insurgents plant alongside the roads and detonate by remote control. The results are something the doctors have not seen before, at least with such frequency &#8212; shredded limbs, penetrating brain injuries, an &#8220;inordinate amount&#8221; of sight-destroying eye injuries.

But flak vests have proved amazingly effective in protecting the chest and abdomen. With the heart and lungs protected, servicemembers may have terrible injuries elsewhere on their bodies, but they live.

But the IEDs send shrapnel and dirt upward. That can drive pieces of metal past the sides of the helmet, or through the eyes and into the brain.

Gullick plans to return the chunk to the soldier before he&#8217;s evacuated to Germany.

In only three months, the hospital has seen more neurosurgery cases than were seen in the entire previous year &#8212; more than 80 since January, up from 60 the whole of the previous year.

Gullick and the other neurosurgeon on staff are tracking the exact location of their patients&#8217; injuries, with the goal of making recommendations on a more protective helmet design.

Most of the neurosurgery patients will end up with a disability &#8220;similar to someone who had a mild or moderate stroke,&#8221; Gullick said. But a quarter will have severe disabilities. Some remain comatose after everything that can be done has been done.

At least three families decided to withdraw life support once their soldier or Marine was returned to the United States, Gullick said, and some have said it was no comfort to see them again; they would rather have remembered them as they were, not so horribly damaged.

Neurosurgeons are always around death, Gullick said. Before he came to Iraq from San Antonio&#8217;s Brooke Army Medical Center, he saw people with gunshot wounds, blunt trauma from car wrecks, brain tumors. Many died. This is worse.