31 bodies recovered as part of South Korean ship is raised 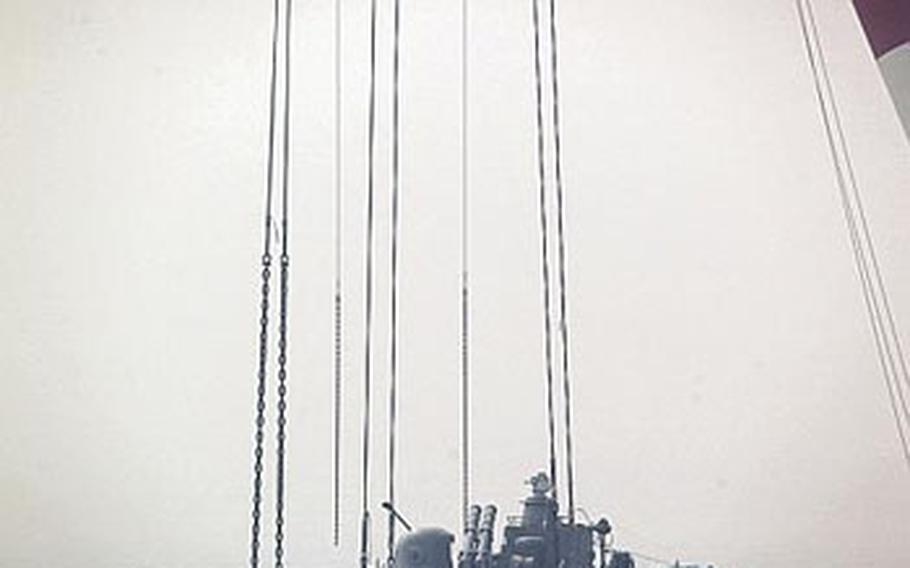 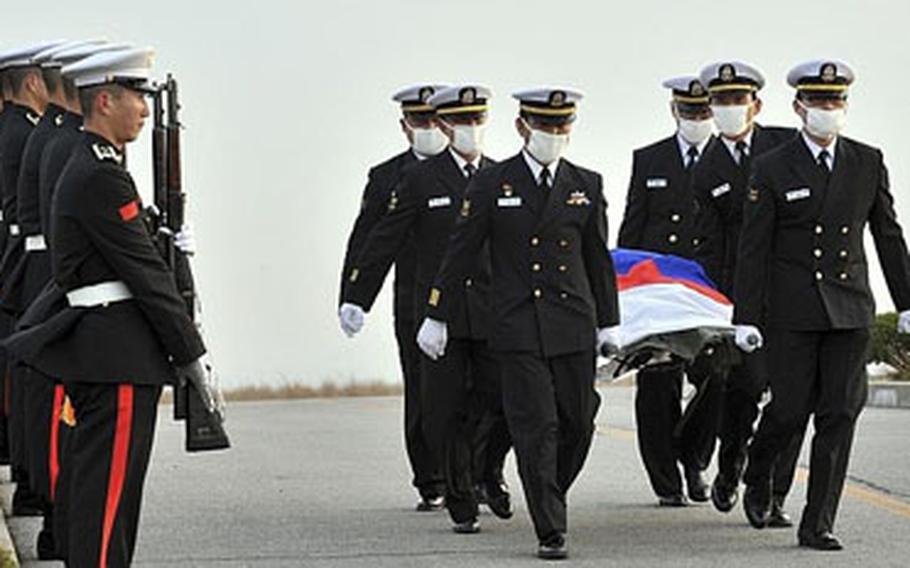 Navy personnel carry the one of the body of the 46 missing sailors of the sunken South Korean naval ship Cheonan, at the naval port in Pyeongtaek, south of Seoul, South Korea, Thursday, April 15, 2010. (Yonhap/AP) 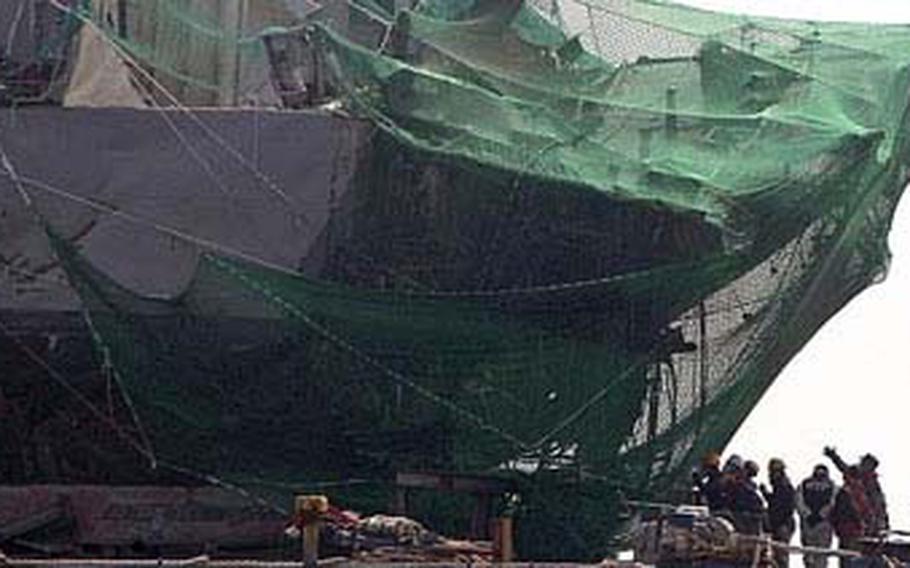 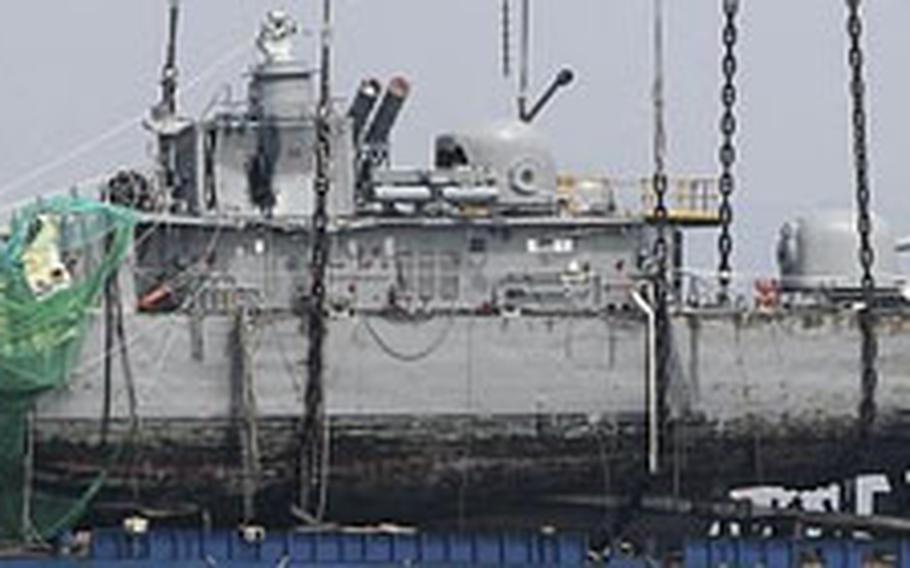 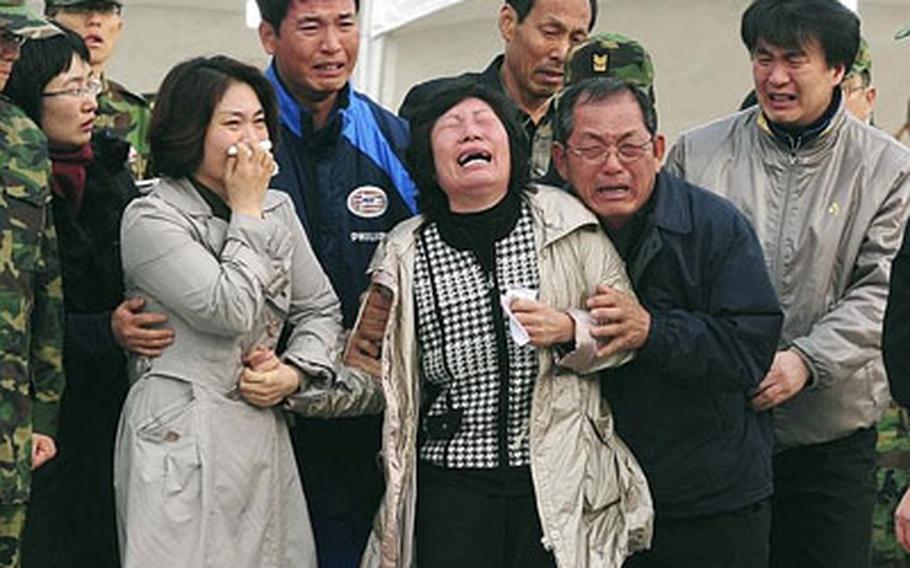 SEOUL &#8212; A massive crane lifted part of a South Korean patrol ship containing the bodies of 31 sailors out of the Yellow Sea on Thursday, nearly three weeks after the ship exploded and sank near the maritime border between North Korea and South Korea.

The 1,200-ton Cheonan ripped in half and sank on the night of March 26 while on a routine patrol. Fifty-eight crew members were rescued that night, leaving 46 missing. Two bodies were recovered before Thursday, when 31 more were found, leaving the number of missing at 13.

Most of the bodies were found in the sleeping quarters, a spokesman for the Ministry of National Defense said Thursday. Others were found in the engine control room, restroom, ammunition stockpile room, and cockpit rooms at the bow and the stern.

The spokesman said swimmers would continue looking for the remaining missing sailors throughout the night.

The cause of the accident has not been determined.

The stern was placed on a barge Thursday afternoon and could make the 26-hour trip to a naval base in Pyeongtaek as early as Friday, the ministry spokesman said. He said the bow of the ship, located about four miles from the stern, will be lifted from the water after April 24.

U.S. Navy spokesman Lt. Cmdr. Denver Applehans said U.S. divers have been looking for debris on the ocean floor in the expanse between the stern and bow but were not involved in raising the stern.

A 16-member U.S. rescue-and-salvage team from Hawaii and a six-member U.S. underwater explosive ordnance disposal team from Sasebo Naval Base, Japan, have been diving at the site since April 7 in conditions Applehans described as difficult.

Three U.S. ships are at the site: the Hawaii-based USNS Salvor, a salvage and rescue ship; the dock landing ship USS Harper&#8217;s Ferry from Sasebo; and the guided-missile destroyer USS Curtis Wilbur from Yokosuka Naval Base, Japan.

Eight U.S. investigators are at the wreckage site to help determine the cause of the explosion, along with 130 South Korean and three Australian investigators, the ministry spokesman said. Another four investigators from Sweden are expected to help with the investigation but had not arrived as of Thursday evening, he said.

South Korea requested help from the outside investigators to provide impartiality in the investigation, officials said. The government has been widely criticized for responding slowly to the disaster. The ministry spokesman said he doesn&#8217;t know how long the investigation will take.