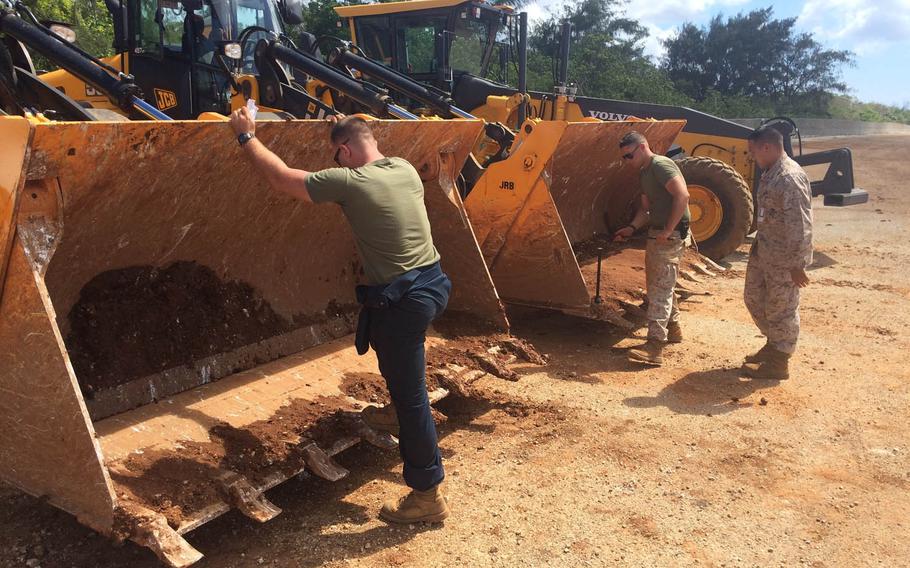 From left, Marine Cpl. Brian Bessey, Cpl. Alexander Corallo and Lance Cpl. Jonahkiyos Bonilla, all engineers in Combat Logistics Battalion-3, conduct maintenance on their heavy equipment at Site Armadillo, Guam, April 17, 2015. The Marines removed more than 11 acres of debris, which they used to build a berm to improve the security of Site Armadillo. The newly cleared area provides additional space for future projects. (Courtesy of the U.S. Army)

CAMP FOSTER, Okinawa — The Defense Department released $309 million Wednesday to begin awarding contracts for the first phase of construction on Guam that will eventually facilitate the relocation of approximately 5,000 Marines and 1,300 dependents from Okinawa.

The funds were contributed by the Japanese government for projects that had already been sanctioned in past defense authorization bills but were frozen by the U.S. Senate over planning and cost concerns. The money will be used to build roadways and sidewalks leading to Finegayan, which will be home to the Marines’ primary base on Guam, as well as for site and grade preparations and electrical, mechanical, water and wastewater utility upgrades.

Three sites will also be developed for waste processing, recycling and infiltration ponds and stormwater conveyance systems to assuage the environmental impact of construction.

The announcement was made on the website of Rep. Madeleine Bordallo, who took partial credit for unfreezing the funding. The former Guam first lady is one of six nonvoting delegates in the U.S. House of Representatives.

“The release of these funds continues to underscore the progress that we continue to make with the realignment of Marines from Okinawa to Guam, and it demonstrates our country’s commitment to this critical national and regional security endeavor,” Bordallo said in a statement. “I look forward to contracts for these projects being awarded, which will inject millions of dollars in needed capital into our island’s economy.”

Japanese Ministry of Defense officials said Thursday that they will not comment on individual statements made by politicians, and Marine Corps officials on Okinawa deferred comment.

The announcement is the latest indication of concrete progress on the relocation effort, which began in earnest in 2006 to reduce Okinawa’s military burden but was held up numerous times while the plans were continuously tweaked to satisfy all stake-holding parties.

Congress has approved spending about $8.725 billion for the relocation. The project features three primary components in various locations on the island territory: Marine Corps facilities at the Navy Computer and Telecommunications Station at Finegayan, family housing at Andersen Air Force Base and live-fire training ranges in the north.

In recent months, steady progress has been made with the completion of the last regulatory hurdle: a record of decision on the environment impact statement.

As it stands, the Marines would start moving from Okinawa in 2021, with the majority in place by 2023.

Stars and Stripes reporters Hana Kusumoto and Wyatt Olson contributed to this report.