300 Marines to deploy to Helmand, Afghanistan 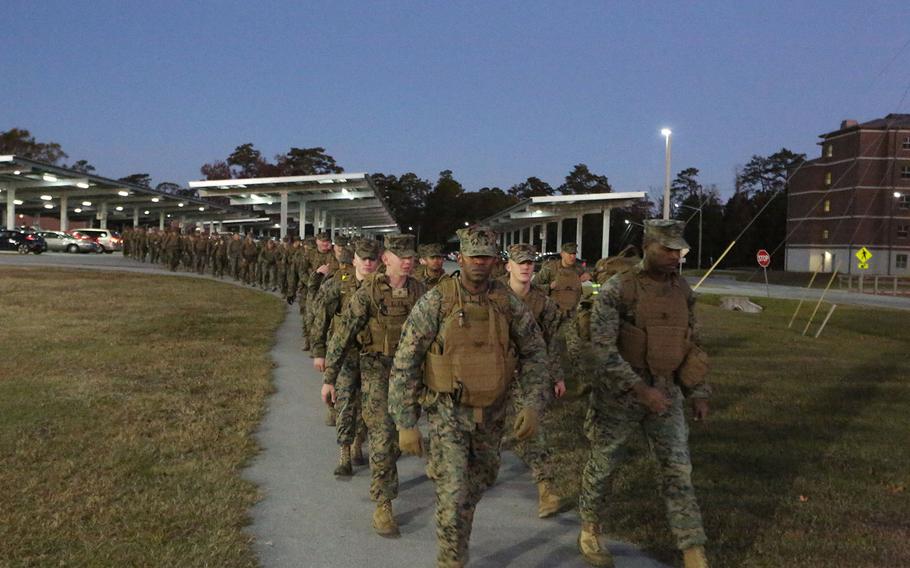 WASHINGTON — Some 300 Marines will deploy in the spring to troubled Helmand Province in southern Afghanistan to support the NATO-led mission to train Afghan security forces in their continuing fight with the Taliban, the Marines announced Friday.

Troops from II Marine Expeditionary Force, which is based at Camp Lejeune in North Carolina, will train and advise the Afghan National Army’s 215th Corps and the nation’s 505th Zone National Police, said 1st Lt. Katie Kochert, a spokeswoman for the Marine unit.

U.S. Central Command requested the deployment, she said. For the Marine Corps, it will be a return to an area where it has operated through much of the past decade. Marines first entered Helmand at the beginning of the war in Afghanistan in 2001. The unit returned in mass in early 2008 and remained in the province through October 2014, when they handed over control of their main base, Camp Leatherneck, to the Afghan army.

Helmand was the site of some of the most brutal fighting between Taliban insurgents and U.S.-led coalition forces throughout Operation Enduring Freedom. Nearly 1,000 NATO troops, including hundreds of Marines, died in the province.

“The Marine Corps has an operational history in Afghanistan, particularly in Helmand Province,” Kochert said. “Advising and assisting Afghan defense and security forces will assist in preserving gains made together with the Afghans. This new deployment of Marines to Helmand reflects our enduring commitment to the people of Afghanistan.”

Since 2015, the Taliban have made successive inroads in Helmand, where they have captured several districts. Afghan security forces have suffered some of their most significant casualties in the province.

U.S. officials have blamed failures in Helmand largely on instability within the Afghan army’s 215th Corps. The unit faced major issues in recent years, including poor leadership, overworked soldiers and fraud. Army Gen. John Nicholson told reporters last month at the Pentagon that ineffective and corrupt commanders have been removed from the unit. He said the unit has undergone retraining in the last year and has shown improvement in recent months.

Nonetheless, the Taliban has continued to target the province, with rare winter attacks occurring as recently as last week in Sangin and Marjah districts.

The United States is in the process of drawing down its force size in Afghanistan from 9,800 to 8,400 troops by Jan. 20, the day President-elect Donald Trump is sworn into office. The war in Afghanistan was rarely discussed on the campaign trail and it is unclear what policy changes Trump might make.