30 years after Soviet withdrawal, some Afghans fear US pullout could mean another civil war 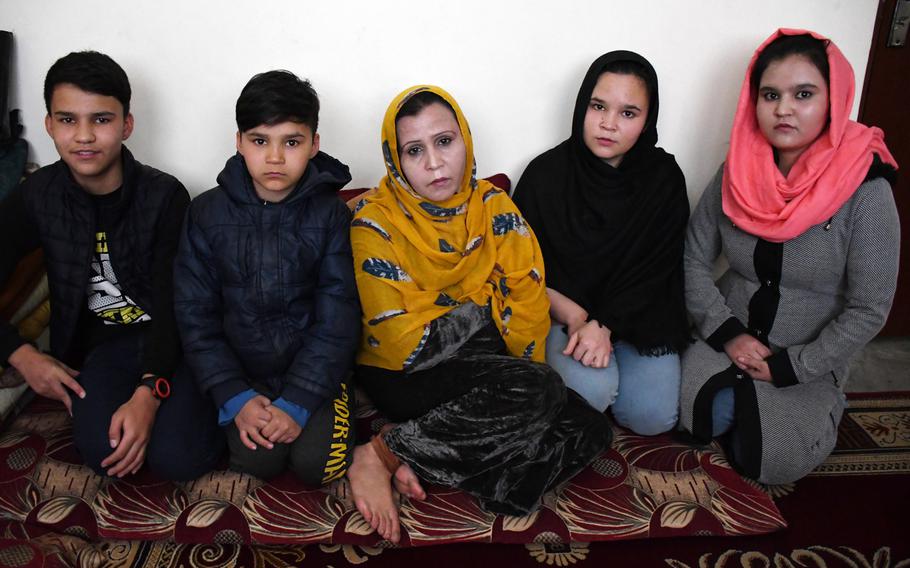 Nasima, who like many Afghans uses just one name, sits with her children in their apartment in northern Kabul on Monday, Feb. 4, 2019. (Phillip Walter Wellman/Stars and Stripes) A police officer guards the main driveway to Kabul's bombed-out Darul Aman Palace in 2016. Reconstruction work on the complex, destroyed in fighting between rival warlords in the 1990s, has begun. Many Afghans fear civil war could breakout in their country again if international forces withdraw hastily. (Slobodan Lekic/Stars and Stripes)

KABUL, Afghanistan — Habib Belal’s small grocery store in central Kabul has a blanket nailed over the doorway to keep the winter air out. He sat inside, wearing a jacket and scarf, tending to customers.

“Things are good now,” he said with a smile, referring to life in the Afghan capital. But he went on to say that most people he knew feared the security situation could soon worsen. “They feel there is a chance for another civil war.”

These concerns have been sparked by ongoing talks between U.S. and Taliban negotiators aimed at achieving a peace deal, which has prompted speculation of an impending withdrawal of U.S. forces.

The last time foreign troops pulled out of Afghanistan en masse — when the Soviet Union ended its decade-long occupation 30 years ago Friday — Afghan groups fought each other and the formerly Soviet-backed central government collapsed.

“We’d watch rockets rain down on Kabul all day long. Every day, innocent people would lose their lives,” Belal, 56, said. The co-owner of his shop, Qumadan, nodded in agreement.

Both men, like some others old enough to remember the civil war, said they feared that a precipitous U.S. military withdrawal could produce a similar outcome, because the government remains weak and Afghan society is fractured among conflicting alliances, just as it was in 1989.

“There are still many groups fighting each other in Afghanistan. If the U.S. leaves and there is a big fight for control, every ethnic leader and warlord will come forward and fight for their own power,” said Ghulam Qadir, 64, a resident of the capital’s Jada-e-Maiwand area.

Qadir recalled his family starving during the civil war after being trapped in their house for days by the fighting. Since then, his neighborhood, which was razed during the conflict, has re-emerged as a busy commercial district.

“The city was not rebuilt overnight, and it wasn’t easy,” he said, “I hope fighting doesn’t destroy it again. I hope Afghans are able to unite and solve their problems through negotiations rather than resulting to civil war.”

After the latest round of talks with Taliban negotiators in Qatar last month, U.S. peace envoy Zalmay Khalilzad said the parties had reached an agreement in principle on terms for the withdrawal of U.S. forces and a pledge by the Taliban not to harbor terrorist groups, but no date for any U.S. pullout had been set.

U.S. officials have said the negotiations are still in the early stages. A Taliban spokesman on Wednesday said the group’s negotiators would next meet U.S. representatives on Monday, a week earlier than originally planned.

Acting U.S. Secretary of Defense Pat Shanahan told reporters last week that he had received no orders from President Donald Trump to withdraw American troops from the country, where they have been operating for over 17 years.

Nevertheless, Trump’s apparent eagerness to end America’s longest war has led to speculation among Afghans and analysts that the deal sought by Washington may be primarily focused on bringing the U.S. participation in the war to an end, and less so on ensuring conditions for lasting peace.

Those fears are compounded by the fact that the Afghan government has yet to participate in talks with the Taliban, although Washington has said any final peace settlement must be decided between Kabul and the insurgents.

President Ashraf Ghani attempted to alleviate those fears in a recent televised address from Kabul. He cited the demise of former President Najibullah Ahmadzai as an example of what happens when outside actors lead peace efforts.

The former president, commonly known as Najibullah or Najib, was replaced by a U.N.-guaranteed interim government, which eventually fell apart and led to continued civil war. When the Taliban took control in 1996, they hanged him from a lamppost.

“We insist on measures because we are aware of the experience of Dr. Najib,” Ghani said. “We all know how he was deceived. The U.N. guaranteed him peace, but it ended up with a disaster.”

Despite past failure, not all Afghans are convinced history would repeat itself if U.S. forces are withdrawn.

No one wants a repeat of the post-Soviet period, said Haji Shah Mohammad, 65, a former mujahedeen commander who fought during the civil war under the warlord Gulbuddin Hekmatyar.

“Those who were involved in the civil war would never take part in a similar war if it happened because it was a great lesson,” he said, adding that the bulk of younger Afghans are likely to be even more opposed to another war. “The situation back then was different; everyone was illiterate. Now young people are educated, there has been huge development in the country and people realize that no one can win power by fighting.”

Although gains in education and public works have been made in some of Afghanistan’s larger cities, illiteracy remains high in the countryside and the Taliban has long been able to recruit fresh troops after suffering losses.

The country’s reconciliation with Hekmatyar and his group, which held sway over large parts of the country during the Soviet resistance and later shelled the capital during the civil war, may offer a model for Kabul and the Taliban to follow.

Hekmatyar signed a peace agreement in 2016, allowing him to return to Kabul from exile after years of being branded a terrorist for fighting against Kabul and its foreign allies. Hekmatyar is now seeking the presidency in elections planned for later this year.

However, victims of the violence and their families remain skeptical that the competing powers can come together peacefully.

Nasima, a mother of four who like many Afghans uses just one name and doesn’t know her exact age, has never recovered the remains of her husband. He was presumed killed among about 150 others following an insurgent bombing near the German Embassy in Kabul in 2017.

After the attack, she fled with her children to Turkey for a better life but was recently deported and sent back to Afghanistan penniless.

In her flat in northern Kabul, Nasima said nothing was as horrific as the civil war, during which she had to bury her father and two brothers in a single shallow grave without coffins. She said she hoped if the U.S. soon ends its war in Afghanistan, it won’t get that bad again.

“I always pray that if we Afghans have committed any sin, please God forgive us for that, but don’t bring us to those days again.”