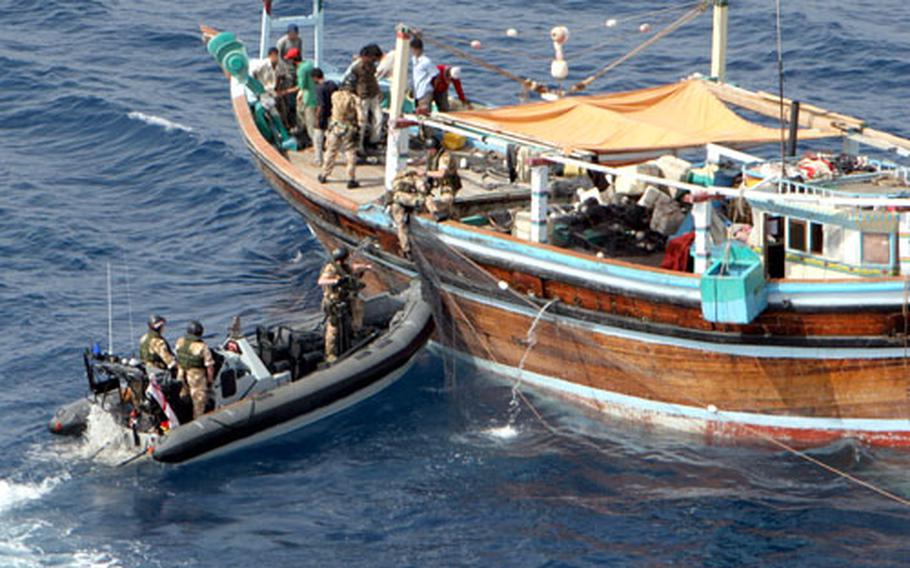 A boarding team from HMS Chatham boards a vessel in the Persian Gulf on July 10. (Photo courtesy of Official Combined Maritime Forces)

Coalition warships in the Persian Gulf have seized 30 tons of illegal drugs over the past five months in international waters that military officials have dubbed the "Hash Highway," according to U.S. Navy officials.

The seizures, carried out mostly by the British navy, have cut off a money supply that possibly funded insurgent efforts in Afghanistan, Commodore Keith Winstanley, commander of Royal Navy forces in the region, said in the press statement.

"The scourge of illegal drugs are one of the gravest threats to the long term security of Afghanistan, and a vital source of funding for the Taliban warlords who seek violence against Afghan, Coalition and NATO forces," Winstanley said. "Our mission in Afghanistan is one of absolute importance, and by seizing these drugs we have dealt a significant blow to the illegal trade."

The narcotics were seized from vessels sailing primarily in the Gulf of Oman, said U.S. Navy Lt. Stephanie Murdock, a spokeswoman with the Navy&#8217;s 5th Fleet, based in Manama, Bahrain.

Afghanistan is the world&#8217;s biggest opium producer, and the U.N. Office on Drugs and Crime reported last month that the country also appears to have become the world&#8217;s top grower of cannabis, overtaking Morocco, according to The Associated Press. The resin from cannabis is molded to create hashish. UNODC estimates that some 170,000 acres of cannabis were grown in Afghanistan last year, up from 120,000 acres in 2006, The AP reported.