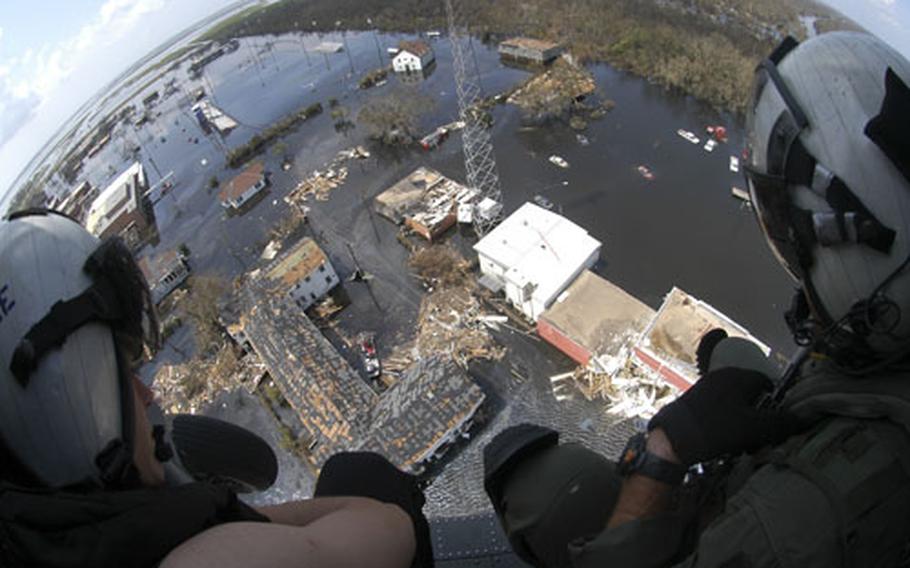 Search and Rescue (SAR) swimmers assigned to Helicopter Sea Combat Squadron 28 watch a rescue unfold from their MH-60S Seahawk helicopter along the coast of Louisiana on Wednesday. The Department of Defense expects to have 30,000 National Guard troops on the ground in the Gulf Coast region in the coming days. (U.S. Navy News / KRT)

ARLINGTON, Va. &#8212; About 30,000 National Guard troops are expected to be on the ground within the next three days in the four states devastated by Hurricane Katrina, Defense Department officials said Thursday.

Of the boots on the ground, 24,000 troops will be evenly split between Louisiana and Mississippi, said Lt. Gen. Russel L. Honor&#233;.

Honor&#233; is commander of U.S. Northern Command&#8217;s Joint Task Force Katrina, which is assisting state, local and federal authorities in the Gulf states by conducting search-and-rescue and lifesaving operations.

Meanwhile, the U.S. Central Command announced it was not sending troops from Iraq and Afghanistan back to the United States to assist with hurricane relief efforts, a CENTCOM spokesman said.

&#8220;There are ongoing efforts in OIF and OEF that will continue unabated,&#8221; said Marine Maj. Matt McLaughlin.

But the Pentagon is looking at ways to bring home from the war zones individual servicemembers whose families suffered from the hurricane and need their help, Lt. Col. Trey Cate, based in Qatar, told the Associated Press.

The new deployments would bring the number of Military Police in Louisiana to between 5,000 and 6,000, Di Rita said.

Under the Posse Comitatus Act, active-duty U.S. troops cannot be used as police officers inside the United States. The National Guard is exempt from the act because it is under state control.

Military officials Thursday could not confirm media reports that a Louisiana National Guardsman had been shot and wounded at the Superdome, or that an Army helicopter had been fired upon while trying to evacuate refugees from the Superdome.

Officials referred questions to Louisiana National Guard spokesman Lt. Col Pete Schneider, who could not be reached for comment Thursday.

The carrier will serve as a floating staging base for hurricane relief efforts and bring helicopters from the Naval Air Station in Jacksonville, Fla., Lawrence said.

She said she did not know how many helicopters the Truman would bring to the area.

&#8220;That imagery will be in turn sent to our ground stations and analyzed, and then it will be turn over to help FEMA efforts,&#8221; Martin said.

She said the Air Force is standing by to conduct more such flights in the near future.

On Thursday, about 100 airmen and four Pave Hawk helicopters from the 55th Rescue Squadron are expected to leave Jackson, Miss., for the flood region, a NORTHCOM news release says.

The troops will augment the more than 20 airmen from the 943rd Rescue Group expected to leave for the region Thursday to help with relief efforts, the news release says.

Sgt. Josh E. Russell, 27, of Petal, Miss., was killed when his vehicle struck storm debris on Interstate 59. The accident is under investigation, and officials did not release further information.

Russell was assigned to Detachment 1, Company A of the 890th Engineer Battalion in Lumberton, Miss.