3 nations holding exercise in Australia ahead of Talisman Saber 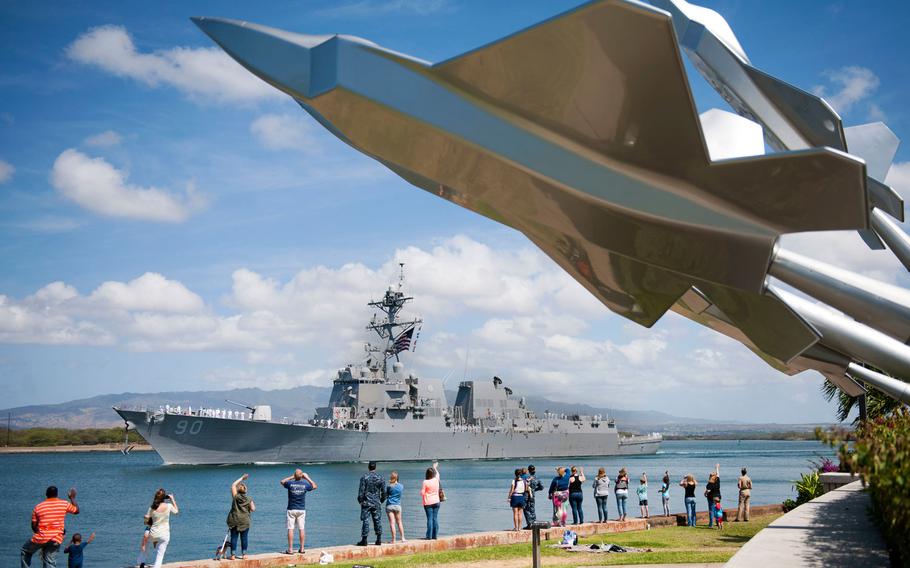 The guided-missile destroyer USS Chafee departs Joint Base Pearl Harbor-Hickam, Hawaii, on May 18, 2015, for an independent deployment that will include participation in the Talisman Saber 2015 exercise. (Diana Quinlan/U.S. Navy)

YOKOTA AIR BASE, Japan — U.S., Australian and Japanese troops are training Down Under this month ahead of joint maneuvers that also will include New Zealand.

One hundred and fifty U.S. and Japanese servicemembers are working alongside 2,000 Australian troops in Exercise Southern Jackaroo, which runs June 1-18 at the Townsville Field Training Area in northeastern Australia, according to the Townsville Bulletin newspaper.

The training is part of a deepening relationship among the three militaries that has included a range of exercises in recent years. Last month, Australian, U.S. and Japanese generals met at Camp Zama — the headquarters of U.S. Army Japan — and defense ministers from the three nations got together in Singapore earlier this week.

Next month, 33,000 U.S. and Australian personnel will hold the biennial Talisman Saber exercise, which will include troops from Japan and New Zealand for the first time. The exercise runs July 4-19 on land, sea and air, according to a U.S. Pacific Command statement.

Drills will be held at Darwin, Rockhampton, Amberley, Canberra, Enoggeram Fog Bay, the Coral Sea and training ranges at Bradshaw, Shoalwater and Townsville, Australia, along with Guam, Joint Base Pearl Harbor-Hickam, San Diego, Joint Base Lewis-McCord, Norfolk and Suffolk, Va., the statement said.

Brad Glosserman, executive director of the Pacific Forum Center for Strategic and International Studies in Honolulu, said the Japanese, who are building their own amphibious force, will pay close attention to beach landings during the exercise.

“That’s where you will see the deepest interest,” he said.

U.S. and Australian military forces train and work together in a variety of exercises and missions throughout the year, including Pacific Partnership, a humanitarian assistance and disaster relief preparedness mission that began in May and will conclude in late September, the PACOM statement said.

A key goal of America’s “Pacific pivot” policy is moving away from simple bilateral engagements and encouraging nations in the region to work together, Glosserman said.

The strategic dialogue involving the U.S., Japan and Australia is the “gold standard” for that concept, he said, adding that it’s likely that Australians will get involved in exercises in Japan in the near future.