3 dead, 2 children injured after car falls from garage outside Yokosuka 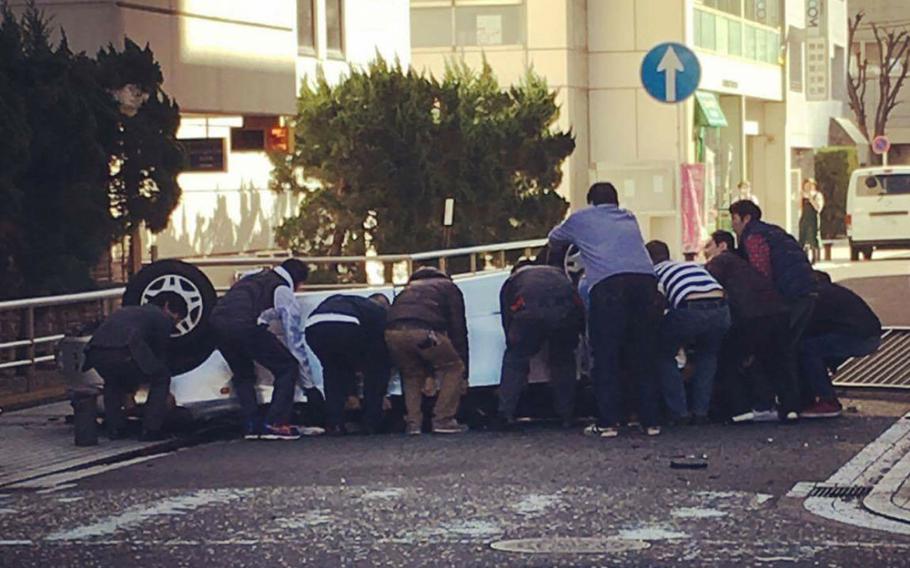 U.S. and Japanese citizens attempt to free people trapped inside a vehicle after it plunged from the fifth story of a parking garage across the street from Yokosuka Naval Base Dec. 31, 2016. Three adults died in the accident, while two children remain hospitalized. (Courtesy of Alisha Osborne)

U.S. and Japanese citizens attempt to free people trapped inside a vehicle after it plunged from the fifth story of a parking garage across the street from Yokosuka Naval Base Dec. 31, 2016. Three adults died in the accident, while two children remain hospitalized. (Courtesy of Alisha Osborne) 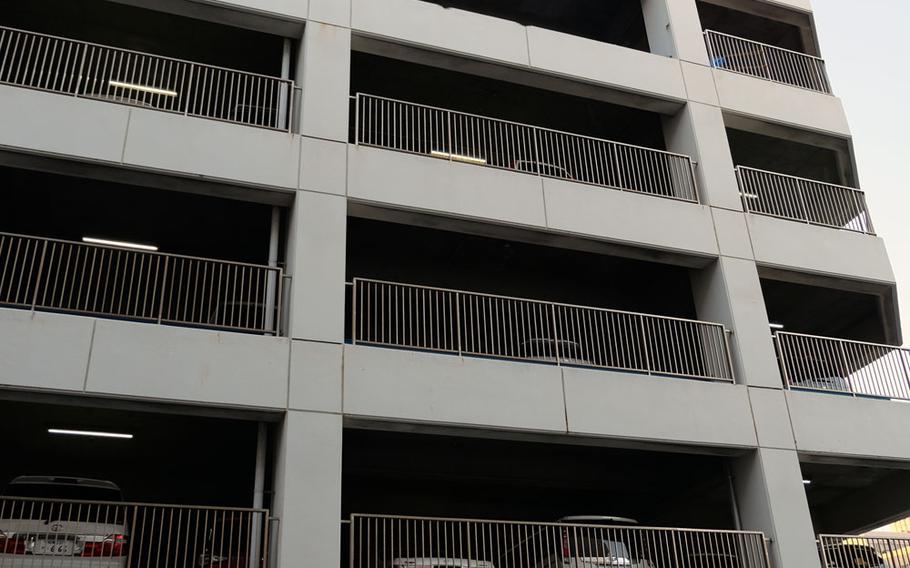 Buy Photo
Three people were killed dead and two children were seriously injured when a vehicle plunged from the fifth story of this parking garage across the street from Yokosuka Naval Base on Saturday, Dec. 31, 2016. The missing barricade indicates where the car fell from. (Tyler Hlavac/Stars and Stripes) 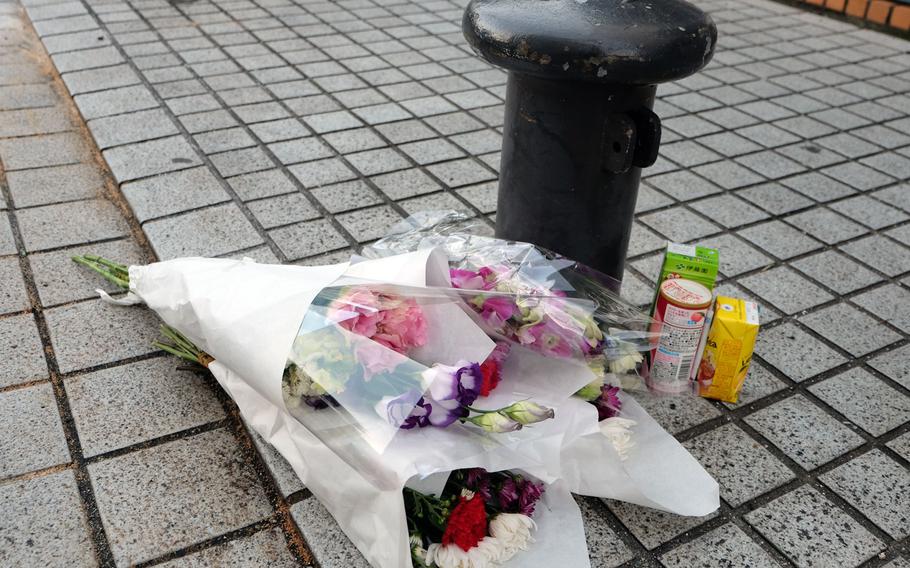 Buy Photo
Flowers and snacks are left as a memorial at the site of a deadly crash that left three people dead and two children seriously injured. The crash occurred Saturday, Dec. 31, 2016 at a parking garage across the street from Yokosuka Naval Base. (Tyler Hlavac/Stars and Stripes)

YOKOSUKA NAVAL BASE, Japan — Three people were killed and two children were seriously injured when a vehicle plunged from the fifth story of a parking garage across the street from Yokosuka Naval Base.

The vehicle backed over a parking stone and crashed through a fence at the Saikaya parking garage, just off Route 16 at about 12:50 p.m. Saturday, according to Japanese media and witness reports.

A sailor from the USS McCampbell, four Marines and other servicemembers in the area were among those who joined Japanese citizens in an effort to free the survivors, witnesses and Naval Forces Japan officials said Sunday.

Kazuhiko Kagejima, 56; his wife Akiko, 46, of Tokyo; and, her mother Hiroko, 81, died in the accident, according to Japanese broadcaster NHK.

Two boys, ages 11 and 16, were pulled out of the car and were hospitalized after sustaining serious injuries, Japanese police told the Mainichi newspaper.

Petty Officer 1st Class Garrett Osborne was walking with his wife, Alisha, his 4-year-old son and 1-year-old daughter when she heard a loud crash that sounded like construction.

“Out of the corner of my eye I see this big object coming out of a building, and sure enough it’s an SUV flying out backward from this parking garage,” said Osborne, assigned to the Navy Munitions Command. “At this point, it’s all going in slow motion, and I don’t believe my eyes. It’s almost something you see in a movie.”

The Osbornes said they were about 50 feet from the vehicle, which flipped and compressed after landing on its roof. They stared at each other in disbelief.

“Then we saw someone waving his arm from underneath the car,” Alisha Osborne said.

While his family watched from a safe distance, Garrett Osborne said he ran toward the car and began yelling for help, making him the first on the scene on a quiet holiday weekend.

While Osborne listened to the screams of the 11-year-old pinned inside the car, about 10-15 Japanese came out of local shops. Some called emergency services, while others, including nearby servicemembers, worked to lift the car, according to photos from the scene.

Osborne and others freed the youngest child, who talked to a Japanese man next to him. After a few seconds, Osborne said the man turned to him.

“Oh my goodness, there’s four more people in that car,” the Japanese man said, according to Osborne.

Several more people arrived, including a servicemember in uniform and policemen on mopeds, who all joined in successfully turning the car over.

The second boy was unresponsive, but appeared to be breathing. There was nothing anyone could do for the three others in the vehicle.

“From the look of things, I believe they died on impact,” Osborne said.

The U.S. servicemembers on hand assisted with the vehicle but deferred to Japanese emergency workers — as they are instructed to do when possible — to render medical aid, Osborne said.

Yokosuka Naval Base has multiple services, including duty chaplains and family counselors, available to speak with any base personnel and their families who were at the accident scene and wish to discuss what they witnessed.