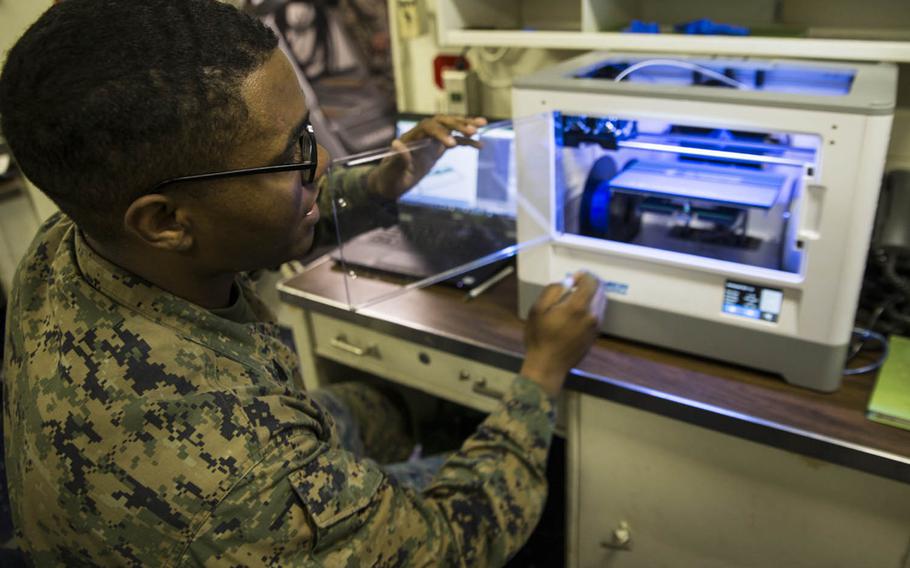 When a plastic bumper for a landing-gear door wore out this month on an F-35B Lightning II embarked on the amphibious assault ship, a 3-D printer was used to whip up a new one.

Called “additive manufacturing,” the process from Naval Air Systems Command allowed the Marines of Combat Logistics Battalion 31 to create the new bumper and get it approved for use within days, the statement said. Otherwise, they would have had to replace the entire door assembly, which is expensive and time consuming.

“While afloat, our motto is ‘fix it forward,’” Chief Warrant Officer 2 Daniel Rodriguez, CLB-31’s maintenance officer, said in the statement. “3-D printing is a great tool to make that happen.”

The Navy said parts created using the 3-D printer are only a temporary fix, but it kept the jet from being grounded while waiting for a replacement from the United States.

Lt. Col Richard Rusnok, commander of VMFA-121, lauded the use of the new technology.

“Although our supply personnel and logisticians do an outstanding job getting us parts, being able to rapidly make our own parts is a huge advantage as it cuts down our footprint thus making us more agile in a shipboard or expeditionary environment,” he said in the statement.

Marine Sgt. Adrian Willis, a computer and telephone technician who created the bumper, said he was thrilled to be involved in the process.

“I think 3-D printing is definitely the future — it’s absolutely the direction the Marine Corps needs to be going,” he said in the statement.

The printer has been used multiple times during the patrol, the Navy said, including to create a lens cap for a camera on a small, unmanned ground vehicle used by an explosive ordnance disposal team.

Templates for the parts will be uploaded to a Marine Corps-wide 3-D printing database to make them accessible to other units.