3 commissaries in Japan slated to close 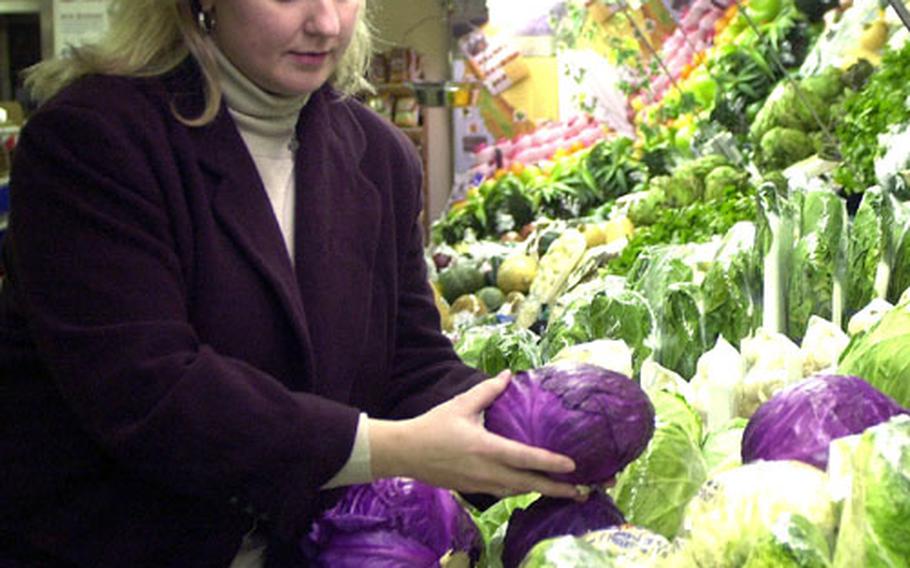 Katherine L. Steele, a counselor at Ernest J. King High School at Sasebo Naval Base, Japan, works on the Main Base and lives in a Japanese neighborhood between the Main Base and the Hario Housing Village. For reasons ranging from greater selections to fresher produce and meats, she explained, grocery shopping is best for her at the Hario Commissary compared to the much smaller store at the Main Base, near her office at the school. (Greg Tyler / S&S)

Residents of at least three U.S. military areas in Japan could have to travel further to buy groceries within a year if orders to close area commissaries come to fruition.

According to a memorandum issued early this fall by the Office of the Undersecretary of Defense, the commissaries at Sagamihara Housing Area, Sagami General Depot and Camp Kure are to be closed in 2004.

Another commissary at Sasebo Naval Base&#8217;s Hario Housing Area could be closed if it becomes a financial burden to the Defense Commissary Agency.

In an undated internal memo obtained by Stars and Stripes last week, Perkins called on the U.S. Forces Japan commander to remove the three commissaries from the closure list.

&#8220;It is absolutely essential that we retain all the commissaries serving the Army community in Japan to prevent a serious negative impact on our quality of life, cost of living, safety, morale and welfare,&#8221; Perkins said.

The Commissary Operating Board of the Defense Commissary Agency recommended the closures in August because the stores do not meet minimum operational standards. The Office of the Undersecretary of Defense subsequently affirmed the recommendation.

In the case of Sagamihara and Sagami Depot, respectively located two and four miles from Camp Zama, there are too few active-duty military personnel to warrant commissaries.

The federal government requires a minimum of 100 stationed active-duty personnel for a commissary &#8212; Sagamihara has 88 and Sagami Depot 87.

But officials say those personnel numbers only reflect soldiers working at the two outposts.

And Perkins says in his memo that Department of Defense civilians should be included in the figure.

And others there say the total populations of each area should be considered.

Only 20 active-duty personnel are stationed there and the nearest commissary is 50 miles away at Iwakuni Marine Corps Air Station, the information paper shows.

But there is more to the closure issue than just the number of active-duty personnel.

Camp Zama&#8217;s commissary is substandard and much smaller than that at Sagamihara, a Defense Commissary Agency official in Japan said Wednesday speaking on condition of anonymity.

The Sagamihara store not only sells groceries, it serves as the central meat and produce processing center for Army commissaries, he said.

Celotto confirmed the discussions were taking place, but said she was unable to give specifics.

The Corps of Engineers is generally prohibited from constructing buildings to house commercial operations, Celotto said. If there was no loophole in the policy, Defense Commissary Agency officials would have to &#8220;bring in their own contractors.&#8221;

But the Corps of Engineers is currently in the process of expanding commissary storage facilities at Sagami General Depot, Celotto said. That&#8217;s allowed because the storage facility is not considered a commercial venture.

She didn&#8217;t have specific details on that project, and the project manager could not be reached for comment late Friday.

Meanwhile, commissary officials at Camp Zama, Sagamihara and Sagami General Depot declined to comment on the development, instead referring all questions to a San Diego, Calif.-based spokeswoman.

She, too, was unable to be reached for comment.

At Camp Kure, closure of the commissary could mean up to five hours of round-trip driving to buy American-style groceries.

Closing that camp&#8217;s commissary could also have an effect on health care.

That&#8217;s because the commissary is the only place Camp Kure personnel can pick up over-the- counter medications, Perkins said, noting the nearest medical facility is at Iwakuni.

But according to the Commissary Operating Board recommendation, there are sufficient shopping alternatives available on the Japanese market around Camp Kure, Sagamihara and Sagami General Depot, a condition considered before proposing any closure.

Perkins said the presence of Japanese stores doesn&#8217;t necessarily mean servicemembers and Department of Defense employees can find what they want or need nearby.

&#8220;Although there are Japanese grocery stores relatively close to the Camp Zama, Sagami Depot and Sagamihara housing areas, the foods sold in these and other Japanese stores only carry labels and instructions in Japanese,&#8221; he said. &#8220;Availability of U.S. products familiar to soldiers and civilian personnel is extremely limited.&#8221;

Perkins also noted many Japanese stores do not meet sanitation standards required of commissaries or grocery stores in the United States. Some available foods also fail to meet American standards, and they are often more expensive.

Regardless, the Office of the Undersecretary of Defense is pushing to close the stores that don&#8217;t meet the minimum operational standards or are struggling to remain financially viable.

The prospect of closing the Hario store makes shoppers there nervous.

Steele also criticized the small Sasebo commissary for not having a good selection of vegetables and meats, noting she doesn&#8217;t think that store could be expanded.

&#8220;If they are looking at funding cuts, one would think they could look toward the small main base store. But that doesn&#8217;t work, because the [single] sailors never come out here to Hario,&#8221; she said.

&#8220;I don&#8217;t believer the Hario commissary will actually close because it is the location of the main storage for both Sasebo [Naval Base] stores,&#8221; she said.

The 24,000-square-foot Hario commissary is the largest store in the Sasebo area, base officials said previously, noting it serves as the main distribution center there, has enough cold and dry storage for all Sasebo area commissaries and produces fresh baked goods.

The main Sasebo commissary is only about 8,375 square feet.

By comparison, commissary officials say Hario serves about 488 families compared to the 148 families at Sasebo.

Sasebo base Commander Capt. Michael James last month appeared on a command broadcast program and said it is premature to raise a red flag over the commissary issue.

&#8220;The recommendation is based on faulty data,&#8221; James said. &#8220;Things were not considered [in the assessment], things like ships being under way a large part of the past two years.