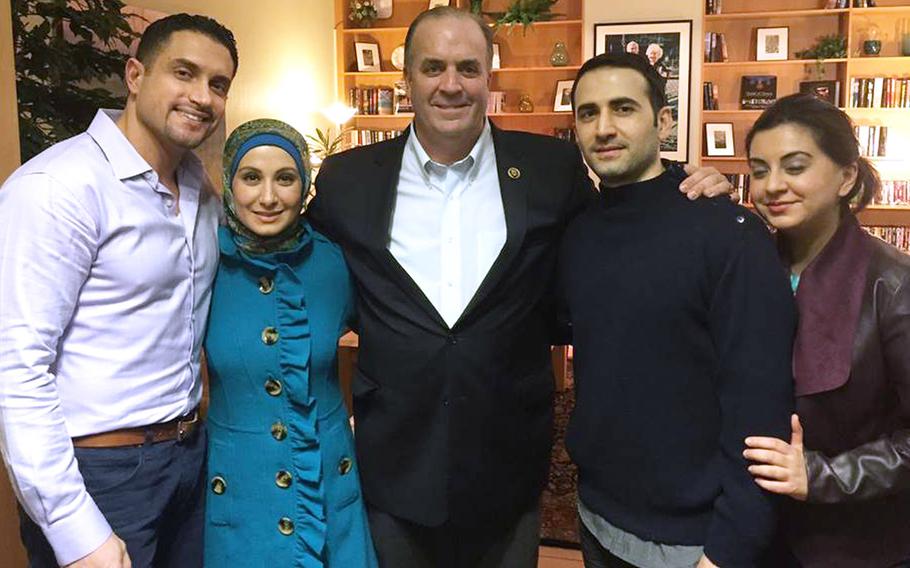 LANDSTUHL REGIONAL MEDICAL CENTER, Germany — The three Americans being treated here after their release from years and months in Iranian prisons could remain in Germany for up to 10 days, three U.S. congressmen said Monday.

Reps. Robert Pittenger, R-N.C., Dan Kildee, D-Mich. and Jared Huffman, D-Calif. met with reporters at the medical center on Monday night, after flying to Germany to show their support for the former prisoners.

U.S. Marine veteran Amir Hekmati, Christian pastor Saeed Abedini and Washington Post reporter Jason Rezaian were freed in a prisoner swap with Iran, after Washington and Tehran agreed on an historic nuclear agreement that will bring some $100 billion in sanctions relief to the Islamic republic.

During the press conference, the three congressmen said they had yet to meet with the freed Americans. But later, The Washington Post reported that Kildee and members of Hekmati’s family had been allowed to meet with the former Marine at the hospital for about 15 minutes.

The three freed men are voluntarily undergoing a battery of medical tests and psychological evaluations, a process that can take five to 10 days. None of the men are reported to be suffering any acute medical conditions, the lawmakers told reporters. Each will be on their own time table and it’s not known if the three will travel together or separately back to the United States when the time comes.

Hekmati was imprisoned the longest of the group at Landstuhl — 4.5 years — “much of it in solitary confinement,” Kildee said.

“Re-entering into the world as a free person will take more than just a deep breath,” he said. “It will take a little bit of help. It starts here (but) it will go on for a long time.”

Kildee said he spoke briefly with Hekmati while en route to Germany, having traveled here with Hekmati’s two sisters and brother-in-law.

“He was enormously grateful and very much aware of all the voices that stood up for him” during his imprisonment, Kildee said.

Although there to support the three former prisoners, the lawmakers touched on political issues.

Pittenger said while “we do rejoice in this moment,” he expressed concern that the swap — which also called for the release of seven Iranian prisoners in America — could make it more dangerous for Americans in the future when traveling in some foreign countries.

“From my point of view, this was a victory for diplomacy,” Kildee said.