Sgt. 1st Class John “Smoke” Johnson from 2nd Platoon, Battery A, 3rd Battalion, 7th Field Artillery Regiment stands astride a ruptured section of the Ageal natural gas pipeline, damaged in a suspected act of sabotage by insurgents about two weeks ago. Johnson and a small group of his men were flown out to the site Thursday to provide security for an Iraqi engineer sent to assess the damage. (Ben Murray / S&S)

Sgt. 1st Class John “Smoke” Johnson from 2nd Platoon, Battery A, 3rd Battalion, 7th Field Artillery Regiment stands astride a ruptured section of the Ageal natural gas pipeline, damaged in a suspected act of sabotage by insurgents about two weeks ago. Johnson and a small group of his men were flown out to the site Thursday to provide security for an Iraqi engineer sent to assess the damage. (Ben Murray / S&S) 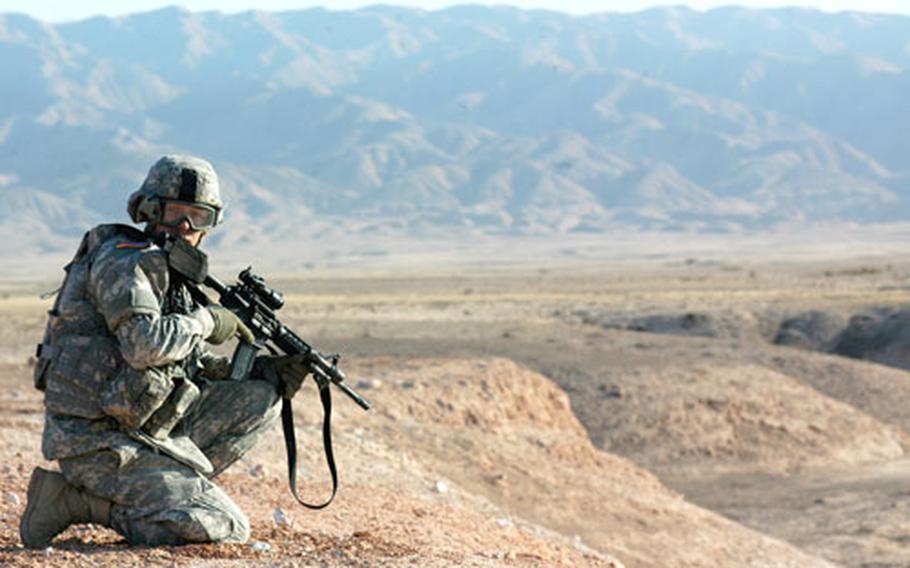 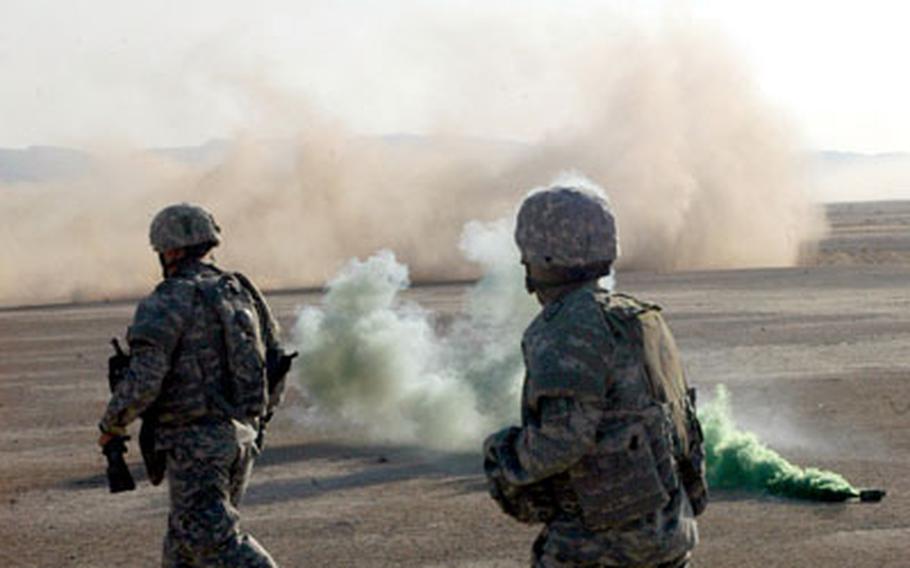 Members of 2nd Platoon, Battery A, 3rd Battalion, 7th Field Artillery Regiment, get ready to re-board a Black Hawk helicopter after providing security for an Iraqi engineer Thursday at a remote site northeast of Tikrit. The unit staged a quick mission to check out a damaged pipeline. (Ben Murray / S&S)

SALAH AD DIN PROVINCE, Iraq &#8212; It isn&#8217;t the type of mission normally associated with the job title &#8220;field artilleryman&#8221;: a lightning airborne incursion far into the middle of unfriendly territory to escort an Iraqi engineer to a section of damaged natural gas pipeline, lasting just long enough to get him in for an assessment, then get him out.

But when a pair of Black Hawk helicopters roared to a halt Thursday on a sandy plateau southeast of Beiji in north-central Iraq, it was members of the 2nd Platoon, Battery A, 3rd Battalion, 7th Field Artillery who jumped out and went to work.

The 3-7 Field Artillery has the task of helping Iraqi security forces guard the oil plants, pipelines and other infrastructure in the region and keep repair crews safe when they go out in the field.

Normally, the job sees the Kirkuk-based unit riding out in Humvee convoys to link up with members of the Iraqi Strategic Infrastructure Brigade, Oil Protection Force or Electrical Protective Security Services, soldiers in the unit said.

But on Thursday the 3-7 went a little farther afield to help fix a problem southwest of their home at Forward Operating Base Warrior. In mid-September, a section of natural gas pipe called the Ageal line erupted in a massive burst of flame in a deserted area near the Beiji refinery.

Military officials suspect the work of insurgents, who have been known to harass &#8212; even kidnap and kill &#8212; energy workers in the area, said Capt. Daniel Blackmon, operations officer for the 3-7 Field Artillery.

That type of history means anyone going out to look at the breach would need security, and the 3-7 Field Artillery was tapped for Thursday&#8217;s out-of-the-ordinary mission.

The mission was short &#8212; the group spent only seven or eight minutes on the ground &#8212; but significant.

The Kirkuk field produces 6.4 percent of the world&#8217;s oil, according to military figures. When running full-bore on its two main pipelines, the Kirkuk oil field can pump out around 660,000 barrels of oil per day, according to figures from Blackmon&#8217;s office.

Only one of those pipelines &#8212; the smaller one &#8212; is currently operational, reducing the actual flow to a maximum of 220,000 barrels per day. The other is under repair, though a massive project to replace it and add new refinery plants in the region is also under way, Blackmon said.

When that project is finished, oil production could increase to about 780,000 barrels per day.

Given that type of volume, a breach in an ancillary natural gas pipe in the middle of nowhere might seem relatively low-key in the grand scheme. But in an energy system, everything is connected.

Because of those oil assets, Kirkuk is also a fulcrum of the much larger political debate in Iraq&#8217;s parliament over whether and where to create autonomous regions in the country. The massive reserve lies on the border of the autonomous Kurdish north and Arab populations to the south, making it a much-sought-after prize for both groups and a flashpoint for argument between government factions.

The natural gas in the Ageal pipeline fuels the three main power plants in the region. Those plants, in turn, power not only the national electricity grid, but the Kirkuk oil field and its refineries and pump stations. Less gas means less power, less power means less oil production, and less oil means less revenue for the country, Blackmon said.

A problem on the gas line then, is a problem for a lot of people, and when the Ageal line ruptured, U.S. and Iraqi officials were quick to react.

A week ago, the 3-7 launched a convoy mission to the blast site to secure the area and allow Iraqi workers from the Northern Oil Company, which manages the oil and gas lines in the region, to start working on a solution, Blackmon said.

But the zone around the site was determined to be too dangerous to work in. The fire was put out, but the amount of gas flowing from the pipe was too heavy to allow workers to safely go into the area.

That meant someone would have to go back later and reassess the danger, leading to Thursday&#8217;s mission.

When soldiers arrived, they found a jagged hole still reeking of gas and ruptured and blackened pipe. Vapors could still be seen seeping from the breach.

The company&#8217;s engineer appeared little concerned by the remaining seepage, however, and Blackmon&#8217;s office said it could be cleared to begin at the site soon.