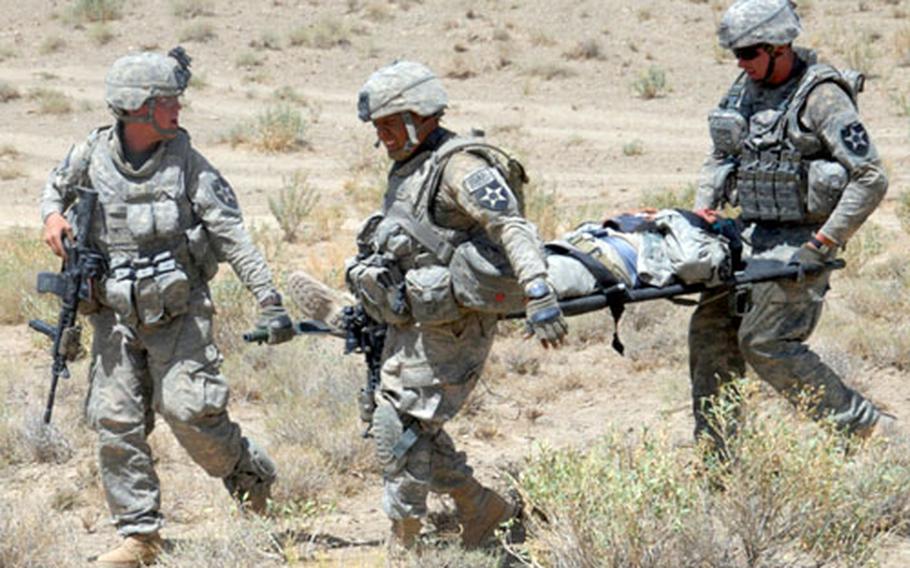 Soldiers from 4th Battalion, 23rd Infantry Regiment, 5th Stryker Brigade Combat Team carry a wounded soldier to be medically evacuated after his vehicle hit an anti-tank mine in Zabul province, Afghanistan, in August. Seventeen Stryker soldiers have died since the unit deployed to Afghanistan in July. The DOD announced this week that the Vilseck, Germany-based 2nd Stryker Cavalry Regiment will replace the 5th Stryker BCT in Afghanistan next summer. (Brian Naranjo / Courtesy of U.S. Navy)

VILSECK, Germany &#8212; The brigade the 2nd Stryker Cavalry Regiment will replace in southern Afghanistan next summer is encountering stiff resistance from the Taliban, according to the 2nd Cav commander, Col. James R. Blackburn Jr.

The Defense Department announced this week that the 2nd Cav will replace another Stryker unit, the 5th Brigade, 2nd Infantry Division, in southern Afghanistan.

The 5th Brigade has lost 17 soldiers since the unit deployed to Kandahar and Zabul provinces in July, according to data compiled by icasualties.org.

Blackburn, who has commanded the 4,000-soldier 2nd Cav since January, said he wasn&#8217;t surprised to see the 5th Brigade in a hot fight.

The 2nd ID unit is the only U.S. Army brigade combat team fighting in southern Afghanistan alongside U.S. Marines and forces from Britain, Canada and Romania.

There was a big influx of multinational forces in the area earlier this year as part of an effort to try to secure the region ahead of Afghanistan&#8217;s presidential elections in August, Blackburn said.

Looking forward, the only thing certain is that 2nd Cav soldiers will face a different threat from the 5th Brigade when they deploy, he said.

&#8220;I&#8217;d expect a different environment when we get there. It will be different after a year of sorting itself out with a new presence of security forces,&#8221; he said.

The tactics that 2nd Cav will use to secure the country will be those laid out by the American field commander in Afghanistan, Gen. Stanley McChrystal and the U.S. Central Command chief, Gen. David Petraeus.

&#8220;We are not preparing just to do lethal operations or only humanitarian missions. We are preparing for full-spectrum operations,&#8221; Blackburn said.

Blackburn did not rule out 2nd Cav using any means available &#8212; from air assaults to foot patrols &#8212; to take the fight to the enemy but said the majority of the regiment&#8217;s patrols will be in the Strykers that will be left behind by the 5th Brigade.

The vehicles can be fitted with additional armor to protect against roadside bombs but adding armor adds weight meaning it is more likely to be used in flat areas instead of in the mountains, he said.

By the time the regiment deploys, it will have been home for 18 months &#8212; the longest dwell times of any brigade in the Army since 2003, Blackburn said.

The soldiers are eager to get back to the war zone.

A squad leader with the regiment&#8217;s Fires Squadron and the veteran of two Iraq deployments, including 2nd Cav&#8217;s last tour to Iraq from 2006 to 2008, Cozort said he felt confident about the Afghan deployment.

In preparing for the deployment, 2nd Cav soldiers trained alongside Romanian troops from the 33rd Mountain Infantry Battalion, who have deployed to Afghanistan.

And the unit will train with soldiers from the U.S. Army&#8217;s 1st Battalion, 4th Infantry Regiment during a mission-rehearsal exercise at Hohenfels.

The 1-4 constantly rotates companies through Afghanistan, and brings their experiences back to Hohenfels to train other deploying units.

The key lesson from the Romanians&#8217; and 1-4&#8217;s experience in Afghanistan is to place a priority on securing your own forces, Blackburn said, before quoting the German statesman Otto von Bismarck: &#8220;Fools learn from their own mistakes. Wise men learn from the mistakes of others.&#8221;