2nd SCR, back in Germany, uncases colors, mourns those who died in Afghanistan 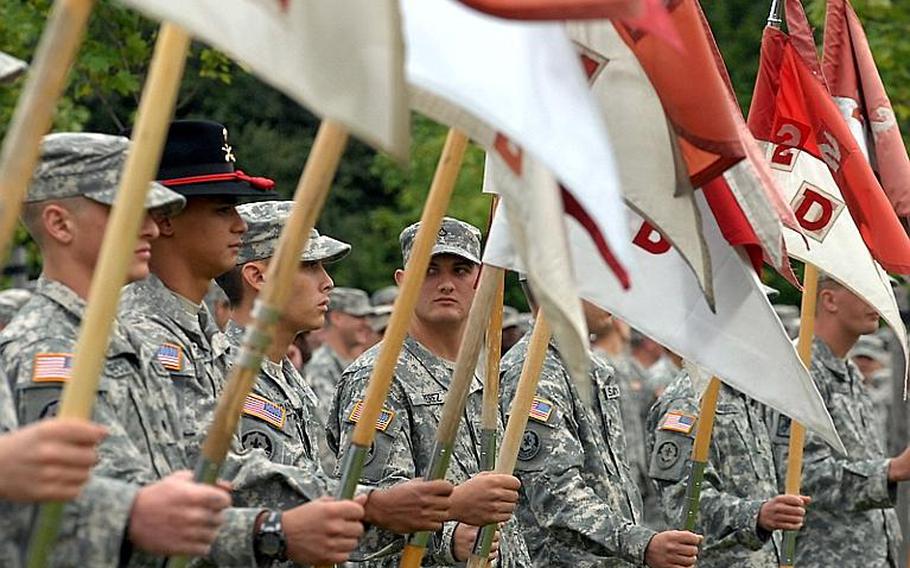 Spc. Timothy Perez, 2nd Stryker Cavalry Regiment, stands with soldiers during Friday's uncasing of colors and memorial ceremony. Twenty soldiers were killed during the regiment?s deployment to Afghanistan, between June 2010 and May. Steven Beardslsey/Stars and Stripes ()

Spc. Timothy Perez, 2nd Stryker Cavalry Regiment, stands with soldiers during Friday's uncasing of colors and memorial ceremony. Twenty soldiers were killed during the regiment?s deployment to Afghanistan, between June 2010 and May. Steven Beardslsey/Stars and Stripes () Col. James R. Blackburn Jr. of the 2nd Stryker Cavalry Regiment speaks at Friday's uncasing of colors and memorial ceremony in Vilseck. Twenty soldiers from the regiment were killed during deployment to southern Afghanistan between June 2010 and 2011. Steven Beardsley/Stars and Stripes () Chris Valadez, 26, left, bows his head during a memorial ceremony in Vilseck on Friday for soldiers killed during the recent deployment of the 2nd Stryker Cavalry Regiment to Afghanistan. Valadez' brother, Pfc. John Andrade was killed Aug. 7, 2010, when his vehicle struck a roadside bomb in Kandahar Province. Steven Beardsley/Stars and Stripes ()

VILSECK, Germany &mdash; A year has almost passed since 19-year-old Pfc. John Andrade died in Afghanistan, the victim of a roadside bomb in Kandahar province.

Time has made Andrade&rsquo;s death more concrete for his family, if no easier.

It&rsquo;s a reality shared by 19 other families of soldiers with the 2nd Stryker Cavalry Regiment, who died in Afghanistan. The unit saw almost daily combat during its yearlong deployment.

Friday, family members gathered at memorial grounds here to witness the regiment uncase its colors and dedicate a monument to those soldiers, whose names are now etched with the dead from 2nd SCR&rsquo;s two tours in Iraq.

The uncasing is part of a week of celebration for the Dragoons&rsquo; redeployment.

On Thursday, Blackburn performed the ceremonial keg-tapping at the opening of the German-American Vilseck Volksfest, and the regiment will rededicate its museum next week.

Friday&rsquo;s memorial saw the full regiment aligned by squadron, each fronted by troop colors. Family members sat under a tent to the side of the monument, and hundreds of spectators lined the street, among them wounded 2nd SCR members.

Spc. Vital Boisset, of 3rd Squadron, was flown in from Walter Reed Army Medical Center, where he&rsquo;s recovering from injuries sustained in an August suicide bombing. Friday was the first time he&rsquo;s seen the regiment since the attack, he said. Scars still mark his neck and lips.

The 2nd SCR was active in three southern Afghanistan provinces &mdash; Zabul, Kandahar and Uruzgan &mdash; where it deployed roughly 4,500 soldiers, many for the first time. Among their operations, they worked to disrupt Taliban fighters before elections in September 2010.

Some companies returned as early as April, due to the quick arrival of the regiment&rsquo;s replacement, the 1st Stryker Brigade, 25th Infantry Division, out of Fort Wainwright, Alaska.

On Friday, Blackburn lauded the deployment as &ldquo;another brilliant chapter&rdquo; in the 2nd SCR&rsquo;s 175-year history.

&ldquo;We provided the Afghan people with a chance, an opportunity for peace and freedom.&rdquo;

Andrade was on his first tour when killed. The Texan was riding point in a convoy at De Khak Chupan Turah on Aug. 7 when the blast struck, Valadez, 26, said after the ceremony.

After the ceremony, the brother approached the monument to take pictures and pose in front of it. He found Andrade&rsquo;s name and placed his fingertips to the stone, tracing the etched name.

The regiment&rsquo;s next deployment is tentatively scheduled for 2013, a time line that could change with additional troop withdrawals from Afghanistan.

Regiment and squadron command, meanwhile, is scheduled to change next week. Col. Keith Barclay, formerly of 3rd Armored Cavalry Regiment will replace Blackburn, and all but two of the squadrons will see new leaders.