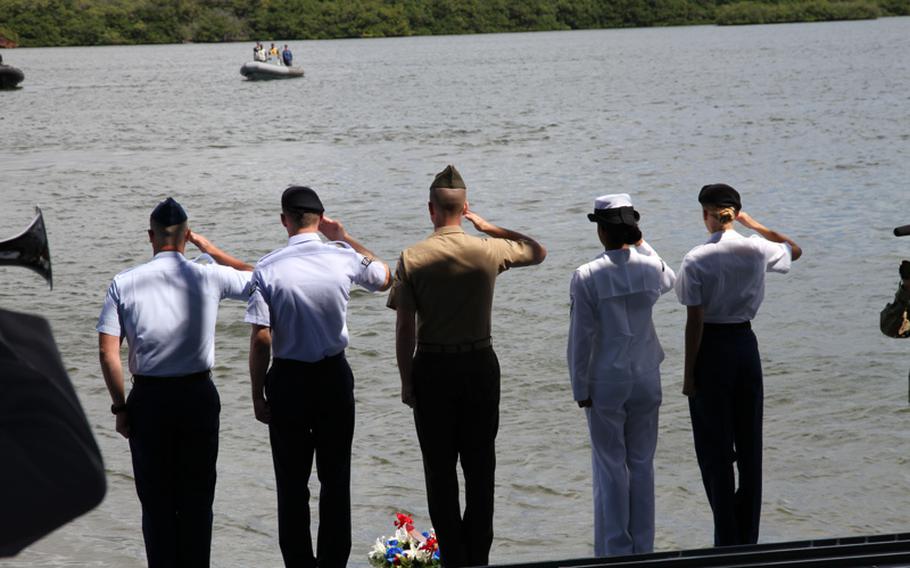 Buy Photo
Representatives of each service salute while taps is played aboard the LTG William B. Bunker in Pearl Harbor, May 20, 2016, during a ceremony commemorating the West Loch disaster of 1944. (Wyatt Olson/Stars and Stripes)

Buy Photo
Representatives of each service salute while taps is played aboard the LTG William B. Bunker in Pearl Harbor, May 20, 2016, during a ceremony commemorating the West Loch disaster of 1944. (Wyatt Olson/Stars and Stripes) 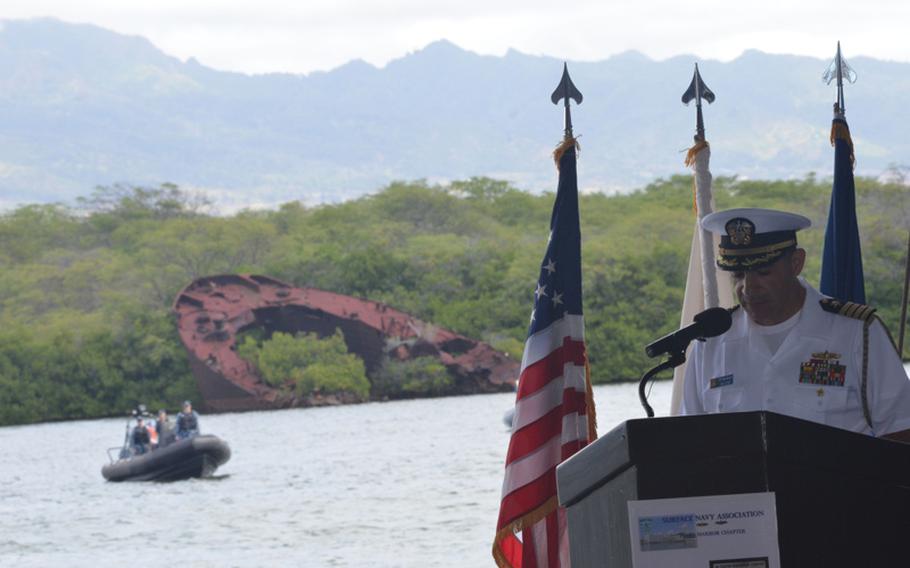 Buy Photo
Capt. Mark S. Manfredi, Navy Region Hawaii, speaks during a memorial aboard the LTG William B. Bunker at the West Loch Annex at Pearl Harbor, May 20, 2016. (Wyatt Olson/Stars and Stripes) 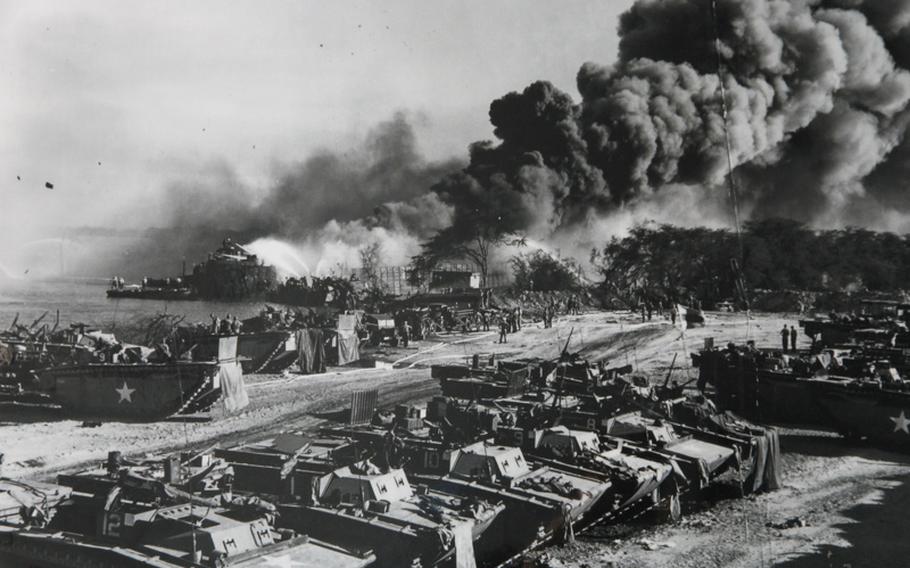 Buy Photo
Smoke billows from ships at Pearl Harbor?s West Loch during the disaster of May 1944. The ships had been in the process of being loaded with the tanks in the foreground, which would be used for the retaking of the Mariana Islands during World War II. (Wyatt Olson/Stars and Stripes) 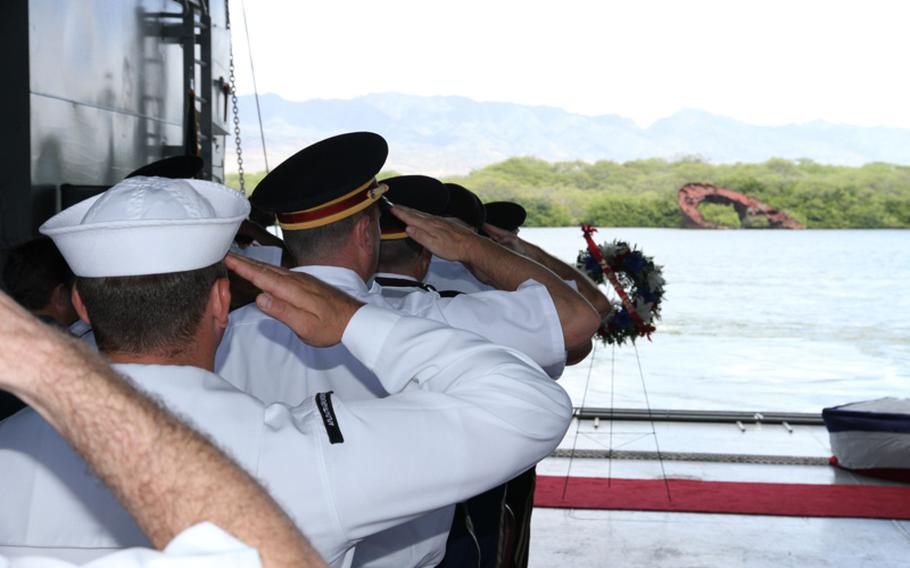 Buy Photo
Servicemembers salute during the National Anthem at a memorial aboard the LTG William B. Bunker in Pearl Harbor, May 20, 2016, that commemorated the West Loch disaster of 1944. In the background is the hull of LST 480, one of six Landing Ship, Tank-class vessels that sank as the result of a chain-reaction explosion that killed scores of men. (Wyatt Olson/Stars and Stripes)

The rusty hulk of LST 480 still juts out of Pearl Harbor’s West Loch 72 years after it sank in Hawaii’s second-worst disaster during World War II.

The relic is the only visible reminder of a chain reaction of explosions that killed scores of men and wounded almost 400, an event some have dubbed the “Second Pearl Harbor,” coming three years after the Dec. 7, 1941, surprise attack by Japan. The 1944 disaster never truly entered the American psyche because of the war-time secrecy that surrounded the entire mission: the invasion of the Mariana Islands.

In recent years, the military and other civic groups have sought to memorialize the fallen and forgotten in the catastrophe, many of whom belonged to a segregated African-American unit.

On Friday, the Army amphibious ship LTG William B. Bunker left port at Joint Base Pearl Harbor-Hickam for the short trip to the harbor’s West Loch for a wreath-laying ceremony that included a 21-gun salute, taps and a moment of silence within view of LST 480.

Sponsored by the Army’s 8th Theater Sustainment Command and the African-American Diversity Cultural Center Hawaii, the shipboard ceremony was held for the first time last year on May 21, the day of the disaster.

Maj. Gen. Edward F. Dorman, III, commander of the 8th TSC, said that he and then-commander of U.S. Army Pacific Gen. Vincent Brooks came up with the idea for the memorial as a way to remember the sacrifice of the men, doing so on the same type of amphibious vessel so common in the Army during World War II but now usually associated with Marines.

While the William B. Bunker is longer, it’s still much like the World War II LSTs, an acronym for Landing Ship, Tank, specialized amphibious vessels for landing battle-ready tanks directly on shore.

“Most people approximate the importance of someone’s contribution to the war by how close they were to the battle,” Dorman said.

But it’s the host of logisticians who provide the equipment, ammo and transportation to carry out combat operations, he said. And the West Loch disaster underscores how dangerous that mission can be.

The cause of the initial explosion still remains unclear.

“Whatever the cause, we had a few hard lessons to learn,” Capt. Mark S. Manfredi, with Navy Region Hawaii, told the audience during a short talk about the disaster. “If we have the courage to face the past, we can learn and improve in the future.”

The lessons go beyond safety measures.

“Today, we also recognize the error in our ways in discriminating against and segregating minorities, especially during and before World War II,” Manfredi said. “Non-white Americans were often called to menial jobs, such as gravediggers and handling dangerous material and toxic chemicals and explosives.

“And while I believe there was never any intent to bring harm to these men through this disaster, the lack of righteousness in what were supposedly acceptable conditions at the time became glaringly obvious.”

President Harry Truman order the desegregation of the military in 1948.

According the Navy’s history of the disaster, 34 ships were assembled in West Loch on May 21, 1944, to load ammunition and supplies in preparation for the invasion of Saipan. Twenty-nine LSTs were docked closely along six berths.

The bows of six to seven ships were moored nose-to-nose, in a star shape called “nesting.”

It was a dangerous formation for ships carrying such volatile cargo. With a crew roughly 120, an LST carried about 90 drums of high-octane fuel in the forward hold. Six-thousand cubic feet of cargo ammo was stowed on the deck, along with other guns and smaller amphibious boats. The ships had their own magazines and a fuel capacity of 200,000 gallons.

The initial blast is believed to have come from the bow of LST-963, where Army troops had been unloading mortar ammunition at about 3 p.m. Fiery shrapnel rained down on the other LSTs, igniting gasoline drums, beginning a chain reaction of massive explosions that killed an approximated 163 men, wounded another 396, sank six LSTs and damaged several more.

Fire raged aboard the ships for more than 24 hours, damaging more than 20 buildings on the shore.

Sailors, Marines and soldiers were all working on the vessels in preparation for the invasion of Saipan. Hit particularly hard was the Army’s segregated African-American 29th Chemical Decontamination Company, whose men accounted for about a third of the casualties.

One survivor of the disaster, Navy corpsman Tony Julian, told a Pennsylvania newspaper in 2013 that the explosion aboard his ship sent him flying into the water.

“I thought it was another invasion, but it wasn’t,” Julian said, who was then 90 years old. “I don’t even know how I got ashore. I had no clothes on, just shorts.”

The catastrophe only delayed the mission’s departure by a day, and the attack force was able to make that up en route to the western Pacific. Friday’s ceremony was also a celebration of the kind of resiliency that allowed that to happen on the heels of such devastation.

While a Naval Enquiry Board concluded that a mortar round exploded on LST-353 and sparked the chain reaction, its report noted that no survivors from the epicenter had been found to determine the actual cause of the detonation.

It was recommended that the practice of nesting be discontinued for safety reasons, but Fleet Adm. Chester Nimitz nixed the proposal, saying, “It is a calculated risk that must be accepted.”