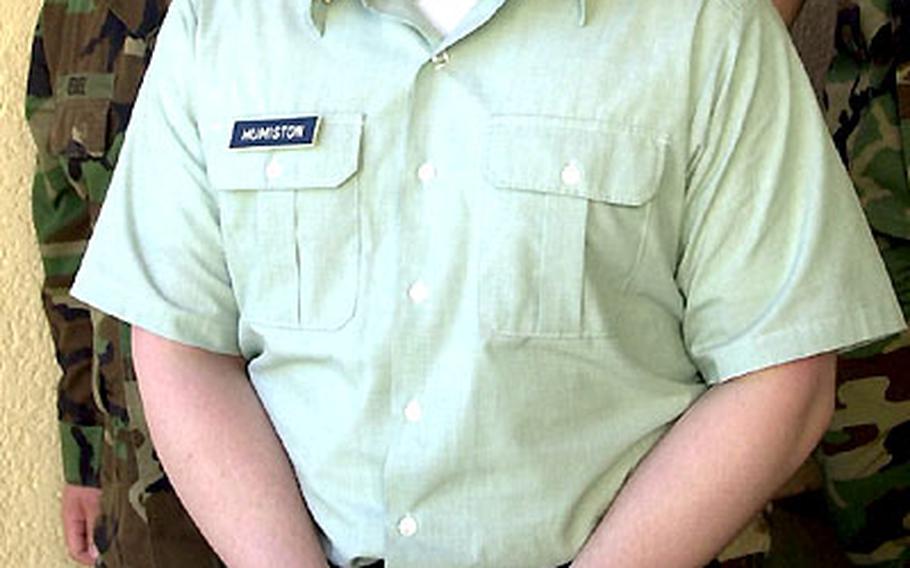 Pfc. Andrew Humiston, who had initially pleaded innocent to charges of felony murder, robbery, conspiracy to commit robbery and obstruction of justice, received a life sentence in prison after changing his plea.

By the end of the day, a military judge had ruled that both Humiston, 23, and Pfc. Jonathan Schroeder, 21, who pleaded guilty to the same charges on Friday, played roles in the slaying and robbery of Spc. Clint Lamebear.

On the morning of Nov. 16, 2002, a German man found Lamebear dead in a Frankfurt garage.

Only hours earlier, around 3:30 a.m., Schroeder and Humiston, who are assigned to the Friedberg, Germany-based 1st Battalion, 36th Infantry Regiment, the same unit as Lamebear, found the 18-year-old Navajo slumped over a bar in Sachsenhausen, Frankfurt&#8217;s pub district. They carried him outside, intending at first to put him in a taxi headed toward their post about 15 miles north of Frankfurt. Lamebear was talking, but leaning on Humiston to walk, Humiston testified.

When the pair led Lamebear into a dark garage, Humiston lit a cigarette and watched Schroeder hit Lamebear, Humiston said. That evening, Schroeder had an argument with another GI over a girl, Humiston told the court, adding that he thought Lamebear was the soldier Schroeder fought earlier.

Lamebear suffered severe blows to the head and later drowned in his own blood, according to a German autopsy. Schroeder and Humiston left Lamebear lying in the dark beside a minivan.

Humiston gave no reason for taking Lamebear&#8217;s shoes and throwing them onto a nearby rooftop. He and Schroeder discarded Lamebear&#8217;s wallet in the nearby Main River, he said. Humiston later burned his military identification, cut the card to pieces, and flushed it down a toilet in the barracks, Humiston said.

After spending 40 minutes alone in his chambers, Judge (Col.) James Pohl returned and sentenced Humiston to life in prison with the eligibility for parole, reduction to the lowest military pay grade, forfeiture of all pay, and a dishonorable discharge. Under a pretrial agreement with Army prosecutors, Humiston will likely serve a maximum of 40 years.

Under military statutes, both Schroeder and Humiston are eligible for parole in 10 years, said Maj. Tiernan Dolan, one of two Army prosecutors to try the two infantry mortarmen.

Humiston, from Champlin, Minn., who originally pleaded not guilty in May, bargained with the Army for a lower sentence and to retain the ability to appeal his Nov. 18 confession to German police, said Guy Womack, Humiston&#8217;s civilian attorney.

As she did Friday during Schroeder&#8217;s trial, Lamebear&#8217;s mother, Kristen June, took the stand to tell Pohl about her son. He always supported her through rough times in her life, she said.

The Army promoted Lamebear posthumously from private first-class to specialist. The Army flew five infantrymen from Lamebear&#8217;s unit, currently on patrol in Baghdad, as character witnesses. Pfc. Jonathan Land, who attended basic training with Lamebear, told the court about the few days they spent together in mid-November. Lamebear arrived in Germany just four days before his death.

The daylong proceedings took place in a stuffy third-floor courtroom at Wiesbaden Army Airfield. Both Lamebear&#8217;s and Humiston&#8217;s families attended.

During Humiston&#8217;s apology, James Benally, Lamebear&#8217;s stepfather, and Lamebear&#8217;s cousin Marine Pfc. Aaron Black left the courtroom. During a recess, Humiston leaned across the bar, embracing his mother, Loretta Humiston, and cried. His father Michael, a former Marine, appeared stunned as he sat nearby.

Both he and Schroeder have been held at the U.S. Army jail in Mannheim and are expected to serve their sentences in Fort Leavenworth, Kan., V Corps spokeswoman Hilde Patton said.