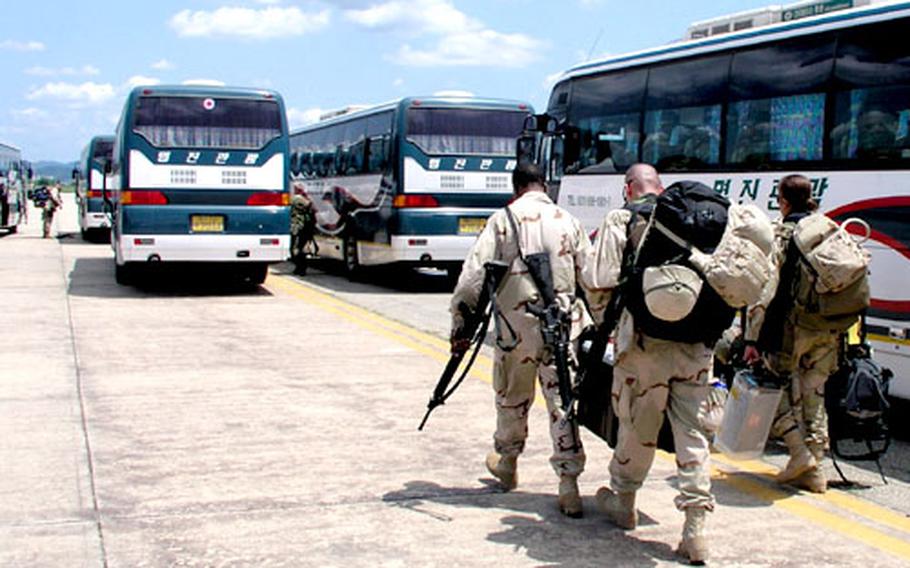 Under sunny skies at Osan Air Base, South Korea Monday, troops of Army&#39;s 2nd Infantry Divison head for buses that will take them to the flight line. Monday marked the start of a weeklong airlift of the division&#39;s 2nd Brigade Combat Team from Osan Air Base to Kuwait, for eventual duty in Iraq. (Franklin Fisher / S&S)

Under sunny skies at Osan Air Base, South Korea Monday, troops of Army&#39;s 2nd Infantry Divison head for buses that will take them to the flight line. Monday marked the start of a weeklong airlift of the division&#39;s 2nd Brigade Combat Team from Osan Air Base to Kuwait, for eventual duty in Iraq. (Franklin Fisher / S&S) 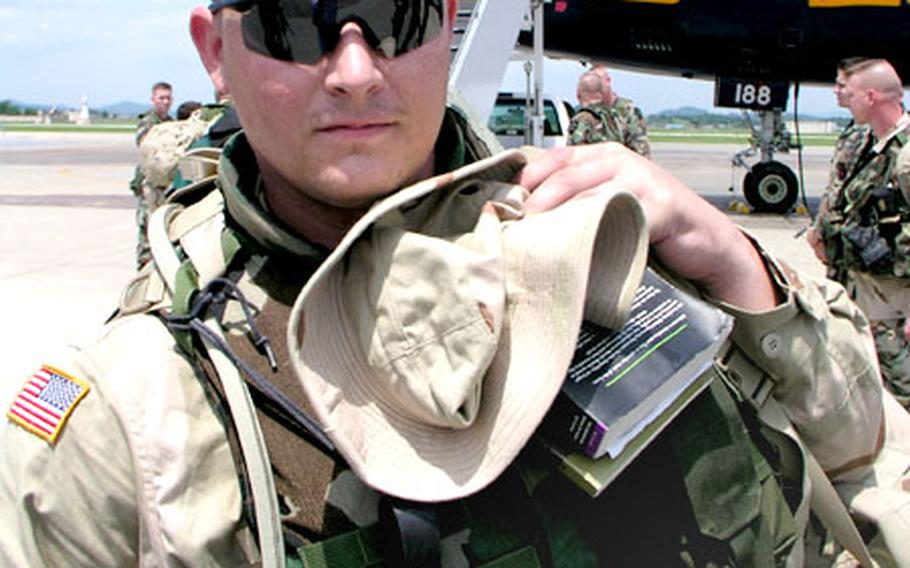 Army Staff Sgt. Robert Williamson prepares to board a chartered jetliner at Osan Air Base for a flight to Kuwait. Williamson is with the 2nd Military Police Company, part of the 2nd Infantry Division&#39;s 2nd Brigade Combat Team. (Franklin Fisher / S&S) 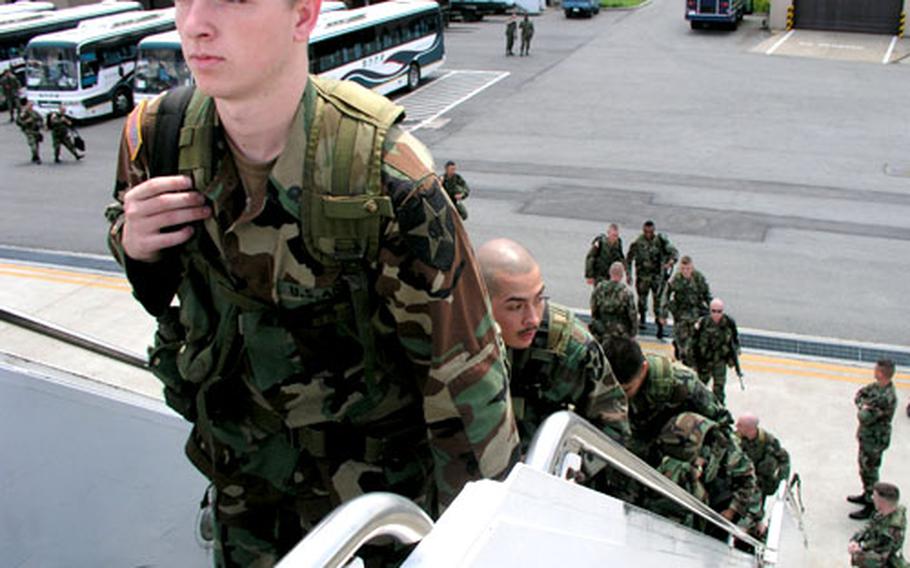 Soldiers of the Army&#39;s 2nd Infantry Division board a chartered jetliner at Osan. (Franklin Fisher / S&S)

OSAN AIR BASE, South Korea &#8212; The first planeload of 2nd Infantry Division troops deploying from South Korea to Iraq took off Monday in what officials said will be a weeklong airlift operation.

The planes will transport the 3,600 troops of the division&#8217;s 2nd Brigade Combat Team to Kuwait, where they&#8217;ll pick up tanks, Humvees and other combat equipment before driving into Iraq.

Plans called for 16 flights to leave over the next week or so, each with 300 troops aboard, said Air Force Maj. Mike Oberbroeckling, 731st Air Mobility Squadron. The first of the brigade&#8217;s troops, each with 60 pounds of gear, began their day around 1 a.m. Monday at the division&#8217;s Camp Casey in Tongduchon.

Before being moved to Osan, &#8220;they&#8217;re getting either steak dinner or steak and eggs for breakfast, depending on the time of their flights,&#8221; said Army Lt. Col. Dave Lee, the division&#8217;s 1st Battalion, 38th Field Artillery Regiment commanding officer. Lee is overseeing the Army&#8217;s part of the airlift operation.

Staff Sgt. Robert Williamson, 2nd Military Police Company, said his unit &#8220;got all manifested and things by about o-three,&#8221; or 3 a.m. The company&#8217;s 1st Platoon is deploying with the brigade to Iraq.

By 7 a.m., the first troops boarded buses at Camp Casey and soon were rolling out of the installation, arriving at Osan several hours later, Williamson said. They waited in a spacious, air-conditioned tent near the Air Mobility Command terminal, listening for an Air Force passenger service agent with a clear, firm voice to call them from a flight manifest he held.

Upon hearing their names, soldiers answered &#8220;Here!&#8221; They hefted their gear and made their way through the white tent flaps, out into the hot, sunny day, for a short walk to the waiting buses. The sky overhead was clear blue with scattered clouds.

Sometime after noon, they were at the flight line and boarded a large white L1011 civilian jetliner chartered by the U.S. military. Most of this week&#8217;s airlift will involve charter aircraft, but some military equipment will be put aboard military planes, officials said. Williamson said boarding the aircraft meant a chance at &#8220;a lot of sleep &#8212; about the only sleep we&#8217;ll get for two weeks.&#8221;

Aboard the first aircraft were 191 division troops. Of those, 150 will help unload the brigade&#8217;s combat equipment from the two ships that sailed from Pusan, South Korea, last month, Lee said.

&#8220;They are being sent from the division to help download their equipment off the ships and then move it to a staging area when the brigade will fall in on the equipment for moving to Iraq,&#8221; he said.

Meanwhile, the Air Force here has been playing its role. Should aircraft maintenance problems or other glitches cause significant delays, said Maj. David Kretz, commander of the 51st Services Squadron, &#8220;we&#8217;ll bus them to the dining facility, give them a hot meal &#8230; we&#8217;ll bed them down.&#8221;

Many members of the base community, including dozens of his own squadron&#8217;s airmen, have volunteered to help Red Cross staff provide beverages, snacks, recreational items, &#8220;help them set up &#8212; tables, chairs, things like that,&#8221; Kretz said.

Senior Airman Jeffery Hunter, 731st Air Mobility Squadron, was working this week as airlift ground liaison between the Air Force and the brigade troops. He&#8217;s present with the soldiers at a secure holding area set up for them on base, and reads their names from the flight manifest before they board buses for the flight line.

Waiting around can make soldiers &#8220;antsy,&#8221; and a calm, patient outlook is important in working with them, he said.

And, Hunter added after a moment, &#8220;The most rewarding part of my job is seeing these troops come home to their families."

Strikeforce units: A look back

The units that make up Strikeforce have some of the proudest histories in the U.S. Army:

&#182; Soldiers from the 503rd Infantry Regiment recaptured the island of Corregidor during some of the bloodiest hand-to-hand fighting ever seen in World War II. The regiment&#8217;s present-day soldiers will take a small piece of the rock of Corregidor with them to Iraq.

&#182; The original band of brothers, the soldiers of the Currahees of the 506th Infantry Regiment, jumped into the night sky over the high ground at Normandy beach, opened the door to Hitler&#8217;s Atlantic Wall and led the way through Bastogne to victory in World War II, winning 25 Distinguished Service Crosses in their fight across Europe.

&#182; Another unit deploying is one of the oldest active units in the Army, the 1st Battalion of the 9th Infantry Regiment.

&#182; The Manchus trace their lineage back to 1799 and get their name from the China Expedition, in which three of their soldiers earned the Medal of Honor in a single day.

&#182; The Redlegs of 2nd Battalion, 17th Field Artillery have participated in virtually every major Army battle from World War I through the first Gulf War.

&#182; The Dragon Force of the 72nd Armor Regiment was sent to battle immediately upon being activated during World War II but earned its renown for spearheading the breakout from Inchon during the Korean War.

&#182; Soldiers from the 2nd Forward Support Battalion helped design the Indianhead patch and the unit has sustained the division since 1917.

&#182; In Korea, the unit was awarded several Presidential Unit Citations for courage and bravery under enemy fire.

&#182; The 102nd Military Intelligence Battalion is formed from companies that saw action in 14 campaigns during the Korean War.

&#182; The Second Military Police Company saw action in World War I, fought alongside the infantry in Korea, and provided the first U. S. soldier to enter Pyongyang as United Nations forces entered North Korea.