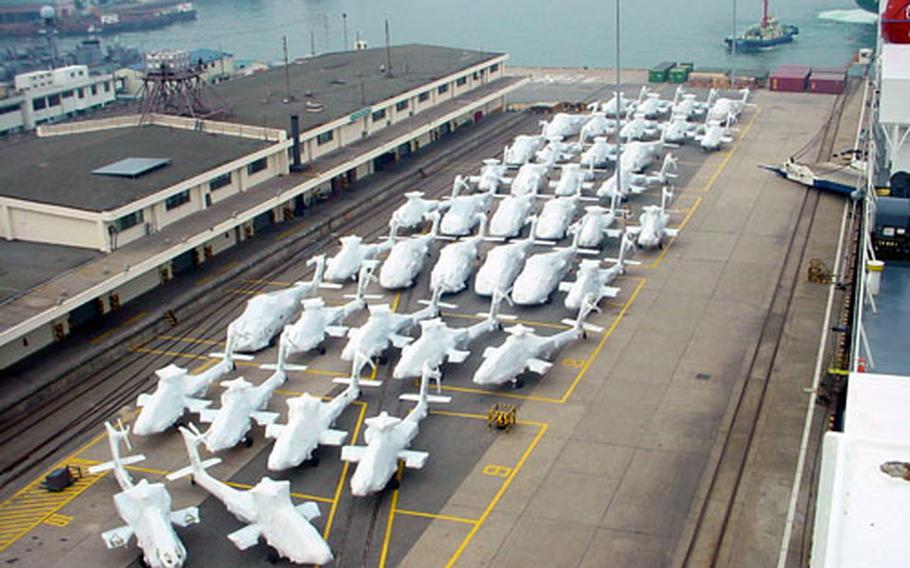 Pierside at the Army&#39;s Pier 8 in Pusan, South Korea in this September 2002 photo, AH-64 Apache helicopters await loading onto ships that will take them to the United States. Pier 8 is currently playing a role in plans to ship the equipment of the 2nd Infantry Division&#39;s 2nd Brigade Combat Team from South Korea to Iraq. (File photo / Courtesy of U.S. Army)

In one of the U.S. military&#8217;s biggest logistical operations in South Korea in years, the U.S. Army began July 7 to haul tanks, Humvees and other 2nd Infantry Division gear south to Pusan Harbor for shipment to Iraq.

Transporting the equipment, from the 2nd ID area north of the Han River, signals a key next step in the combat team&#8217;s planned deployment. Its 3,600 troops are to depart for Iraq later this summer.

The equipment includes Abrams tanks, Bradley Fighting Vehicles and other gear in types and quantities tailored to the specific mission the team has been assigned in Iraq, officials said.

By the time it&#8217;s over later this month, the operation will have involved some 40 separate train runs and 200 truck trips into Pusan, said Lt. Col. Brian Imiola, deputy commander of the Army&#8217;s 20th Area Support Group.

The trucks on average cover about 290 miles of road from the division&#8217;s northern areas to Pusan.

Normally, said Rice, Pier 8 is large enough for the Army to stage cargo to ship out of Korea. But for this operation, the Army arranged extra space at South Korean military and commercial piers in Pusan, &#8220;a clear indicator of the immense proportion of the project.&#8221;

Trains are moving equipment from railheads at two division camps, Red Cloud and Edwards. Other brigade equipment, packed inside steel shipping containers, is being run by trucks to Pusan. Some is going to Pier 8 for later transport by ship. Other cargo is being held first at the Army&#8217;s Pusan Storage Facility, then put aboard ship from an adjacent commercial pier.

For the operation, the Army has brought together more than 350 troops from the 2nd ID and Army units in lower South Korea, including Camp Hialeah in Pusan, Imiola said. His unit, the 20th Area Support Group, is overseeing the operation but in close coordination with 2nd ID, he said.

The troops &#8212; including mechanics, medics, military police and others &#8212; are working in two 12-hour shifts to take delivery on the equipment, which arrives night and day, Imiola said.

The last time the U.S. military transported a brigade-sized unit out of South Korea was in 1991, when the 2nd ID&#8217;s 3rd Brigade went to the United States, Johnson said.

But the 2nd ID combat team&#8217;s deployment to Iraq marks the first time the U.S. military has sent one of its forward-deployed South Korea units to another theater of operations, Johnson said. U.S. forces have been based in Korea since the 1950-53 Korean War.

Army logistics units in South Korea train annually to stage and move equipment in wartime, in an exercise known as RSO&I, for Reception, Staging, Onward Movement and Integration.

But the training typically emphasizes equipment entering South Korea, as it would in wartime.

This time, the logistics troops are applying the same set of skills, said Imiola. &#8220;We&#8217;re just simply doing it in reverse. Instead of just sending stuff north, we&#8217;re just catching it north and sending it south.&#8221;