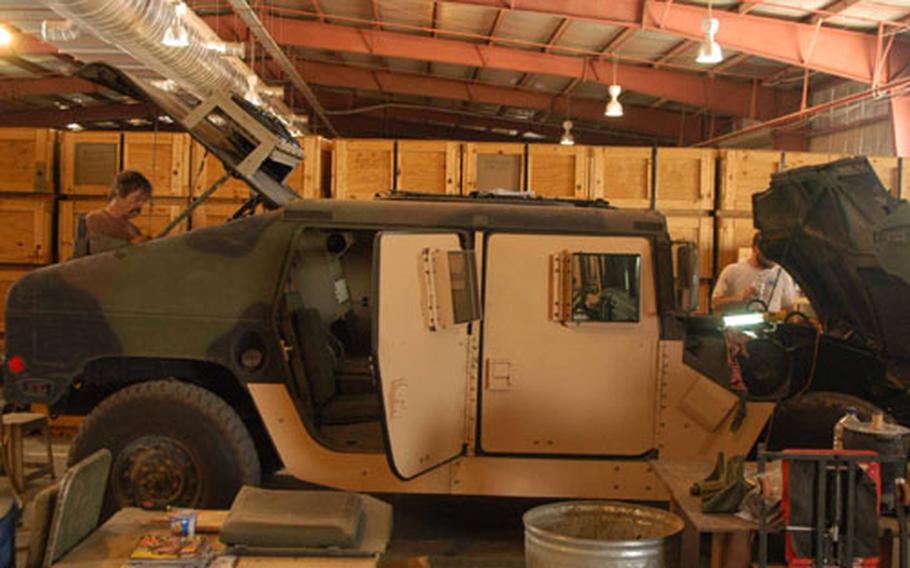 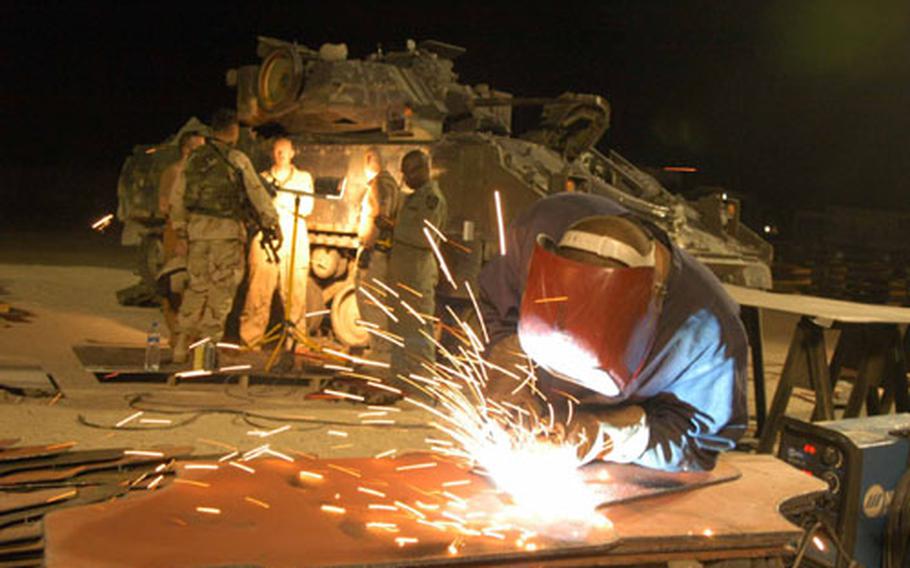 The vehicles, from the Iraq-bound 2nd ID&#8217;s, 2nd Brigade Combat Team, known as Strikeforce, arrived in Kuwait last week. They survived tough roads and muddy hills near the Korean Demilitarized Zone, but now must be refitted for jagged rocks and roadside bombs in Iraq.

The shop got its name from the post-apocalyptic Mel Gibson film trilogy that features its own version of up-armored vehicles doing battle in the Australian outback. The workshop looks similar to a modern version of the sort of blacksmith&#8217;s yards that medieval knights probably went to to upgrade their armor before battle.

It is the brainchild of Chief Warrant Officer Randall Menough, 41, of Salem, Ohio, and Staff Sgt. Dennis Kenney, 36, from East Jordan, Mich., who have 40 years&#8217; combined experience working with metal.

The pair, from the 699th Maintenance Company out of Fort Irwin, Calif., were assigned to force protection at Camp Buehring in April. But when soldiers asked them to up-armor vehicles not assigned commercial armor, they saw a demand they could meet.

The pair set up shop in a corner of the camp and quickly started. In three days, they up-armored an entire battalion&#8217;s vehicles.

Soon they had five soldiers from the 699th working for them and hundreds of sheets of Hardox 400, a type of armor with a high nickel and chromium content.

The Hardox costs $1,200 a sheet, which for a while caused the Army to question the volume consumed at the shop, Kenney said.

The Army changed its view and recently delivered 590 sheets of Hardox, he said.

Soldiers cut the armor into the shapes of doors and gun mounts that Kenny has designed for the vehicles.

The shop runs from 12 to 15 hours each night because, by day, the metal plates get too hot to pick up. In a single night, the soldiers can up-armor as many as 140 doors on 70 LMTVs. Since April, the shop has up-armored more than 1,900 vehicles, Menough said.

Units receiving the armor have reported that it has saved seven lives when roadside bombs exploded, he said.

&#8220;They say our armor is preferred to the factory armor because we cover just the head shot so they have a lot more area to fire out of. It is a deterrent to the enemy. They pick the easy targets &#8212; the vehicle that is up there with no doors at all,&#8221; Menough said.

On Wednesday night, the Mad Max shop was a hive of activity.

Blowtorches threw sparks into the night while off-cuts piled up in the dust and rows of armored doors were spread on the ground.

One of the soldiers doing the work, Pfc. Trinity Luesehow of the 2nd Forward Support Battalion, 20, from Gillette, Wyo., cut 34 doors in two days, he said.

&#8220;I enjoy cutting and welding. You need to be careful and watch your line. The difficult part is cutting a straight line,&#8221; he said.

Several hours&#8217; drive away, at Arifjan, dozens of 2nd ID Humvees are being made over with commercial up-armoring kits.

&#8220;We are preparing the vehicles for the guys putting the armor and air conditioners in them,&#8221; he said.

The soldiers take off the old doors and the bolts where the armor is going to mount so that all the mechanics have to do is drill holes and put the armor on.

After the 2nd ID soldiers prepare the vehicles, civilian Department of Defense mechanics add the armor and air conditioners. Most are former servicemembers and many are Vietnam veterans.

The mechanics wear stars-and-stripes bandanas dipped in cool water to keep their heads cool while they work.

A typical push sees the mechanics service 75 Humvees. Since March 2003, more than 8,000 armor kits, 2,000 air conditioners and 4,500 windshields have been installed in Kuwait and Iraq, officials said.

Jones, a stocky veteran who served in Vietnam with the 1st Infantry Division, said the vehicles are a lot tougher than the jeeps and Hueys he rode in Vietnam that had no armor.

The tracking system allows soldiers to chat or e-mail other vehicles on the battlefield, all the while tracking each other and possible targets. A touch screen allows operators to zoom in on their area of operations using satellite images updated every few minutes.

&#8220;People can plot routes and enemy positions on maps and satellite images displayed on a monitor, then share them with everybody else in theater,&#8221; said defense contractor Greg Garrett, who is helping install the systems.

After the 2nd ID Humvees finish their makeovers, they roll out of Arifjan sporting new yellow doors on their green frames.

&#8220;It kind of feels like a new vehicle with the armor on it, but we still have to keep the maintenance up. When you drive it, it feels heavier but it feels good,&#8221; said Evans, who believes soldiers will be particularly impressed by the air conditioners.