2nd ID unit in Korea to deactivate, be replaced by rotational force 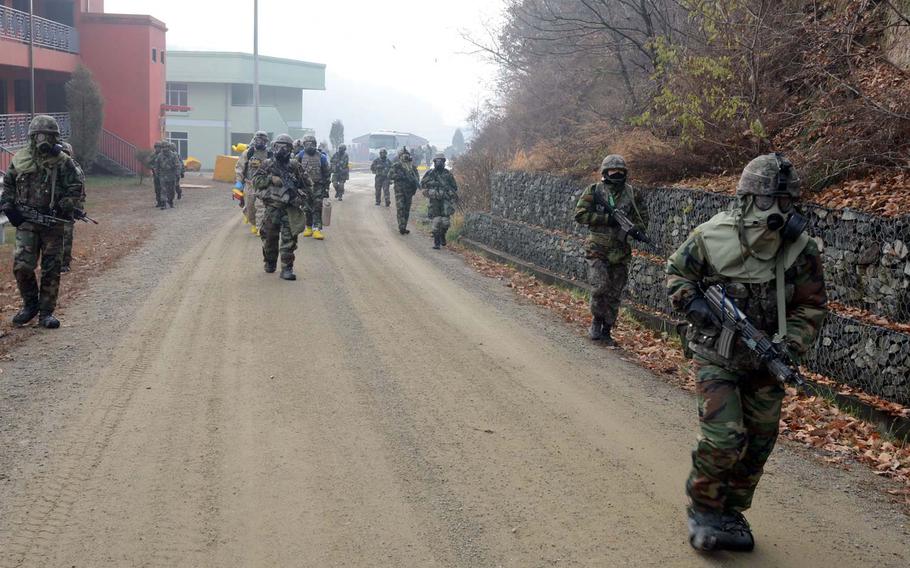 SEOUL, South Korea — A decades-old 2nd Infantry Division unit stationed near the tense South-North Korea border will deactivate and be replaced by a U.S.-based rotational brigade combat team, according to the Pentagon.

The 1st Armored Brigade Combat Team will be deactivated in June 2015 and will be immediately replaced by approximately 4,600 soldiers from the 2nd Brigade Combat Team, 1st Cavalry Division stationed at Fort Hood, Texas, the Defense Department announced Thursday.

Troops are typically stationed in South Korea on one- or two-year tours, leading to frequent turnover within units. The deactivation and switch to nine-month rotational deployments is part of a U.S. Army rotational plan that calls for similarly sized and capable units from the United States to train and deploy together.

“There’s no loss in capability. Some would argue that the capability might even be slightly higher because it’s a trained unit that arrives there in Korea prepared to act,” Pentagon spokesman Col. Steve Warren told reporters. “We believe that any loss to continuity with familiarity to the terrain will be made up by a single cohesive unit that is familiar with working with each other.”

One commander recently told Stars and Stripes that the use of rotational deployments led to greater stability during his unit’s time in Korea.

“It allowed us to reach a level of proficiency and maintain it by not changing out our people,” Lt. Col. Arthur Sellers, commander of the Fort Hood-based 1st Battalion, 12th Cavalry Regiment, which left South Korea in October after a nine-month tour. The battalion was replaced by the 3rd Battalion, 8th Cavalry Regiment, 3rd Brigade Combat Team, also out of Fort Hood.

The 1st Armored Brigade, nicknamed “the Iron Brigade”, has been headquartered in South Korea since 1965. The 1ABCT has been awarded South Korea’s Presidential Unit Citation three times for its contributions to South Korea’s national security and defense.

“The Iron Brigade has played an integral role in the defense of the Korean Peninsula,” Warren said. “It trained and worked alongside its South Korean partners to deter aggression.”

The deactivation plan was conceived last year. Warren said it does not portend a reduction in the overall U.S. military presence in Korea. There are 28,500 U.S. troops based there.

After the unit is deactivated, soldiers who were part of it will move on to other assignments throughout the Army, according to Warren.