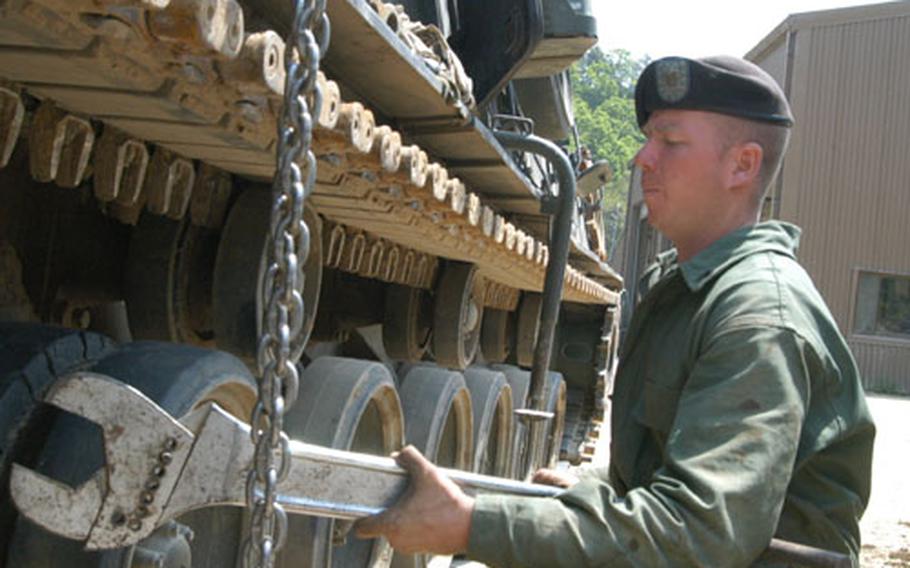 A soldier from 2-9 Infantry Regiment&#39;s Mainenance Platoon works on worn out track on a Bradley Fighting Vehicle on Thursday. (Seth Robson / S&S) 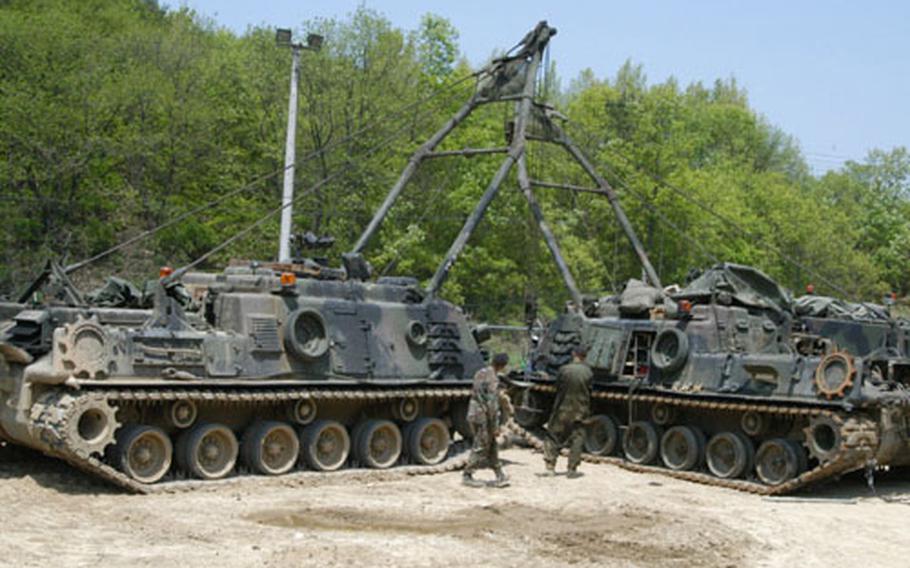 Soldiers from 2-9 Infantry Regiment&#39;s Maintenance Platoon use an M88&#39;s crane in an effort to release tension on another M88&#39;s track at Rodriguez Range. (Seth Robson / S&S)

Each Bradley has 166 blocks of track. The blocks, which cost $140 each to replace, are made of steel and rubber. Dozens of pins link them together to form the tracks. When the rubber on the blocks wears out, they need to be replaced, just like bald tires.

&#8220;Our track is getting worn out by all the driving we do on concrete and roads. I have got one over there with no rubber on the left side,&#8221; Richardson said, pointing to a disabled Bradley languishing in a corner of the maintenance bay at Rodriguez Range.

Normally, the mechanics would replace worn out blocks with new track. However, the need to supply track to vehicles in Iraq and Afghanistan means there is not enough for vehicles in South Korea, he said.

The pins holding together blocks of worn-out track are more susceptible to breaking, which can cause track to split while a vehicle is being driven, he said.

To keep the Bradleys running, mechanics spend a lot of time moving bits of worn out track around.

&#8220;You replace the bad sections and keep maintaining it properly. When something becomes unsafe we don&#8217;t drive it,&#8221; Richardson said.

In the field, from three to five Bradleys go down with technical problems each day, he said. Problems with Bradley gun sites are also common. &#8220;They are very sensitive and they get knocked out of calibration. There is a lot of complex electronics in the turret and a lot of different things can go wrong,&#8221; he said.

At least one of 2-9&#8217;s Bradleys is out of commission because mechanics have taken the good track from it to use on other vehicles, Richardson said.

If war with North Korea broke out tomorrow, some of 2-9&#8217;s Bradleys would not be able to move immediately because of worn out tracks, Richardson said.

Tracked vehicles are essential for fighting in South Korea, he said.

&#8220;Tracked vehicles are a lot better in the mud. If you tried to take a wheeled vehicle through a rice paddy, it would just get stuck,&#8221; he said, watching a group of mechanics work on a recovery vehicle track.

Sgts. Duane Cobb and Cord McCoy and Pfc. Ganesh Persaud were trying to release the tension on the track by undoing a large bolt.

The bolt was so big and wound so tight they needed another M88 to act as a crane to pull a massive wrench, the size of a sledgehammer, to undo it.

A dust devil swirled nearby as soldiers used a special tool to knock out a pin linking the blocks in the track.

It also reminds him of his last duty station in Iraq.

&#8220;Over there we were getting parts real fast. We are in a situation here where we could go at any time but we have problems getting parts,&#8221; Wright said.

Not all the soldiers from the Maintenance Platoon were repairing track.

Is there any danger of machines replacing the mechanics one day?