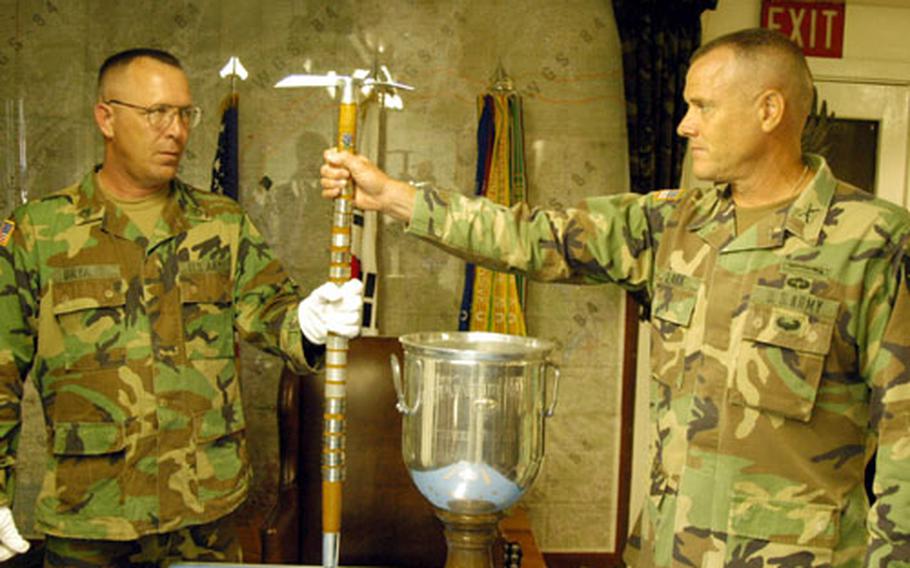 Staff Sgt. Ricky Bryant, left, of the 2nd Infantry Division Museum, receives Hitler&#39;s walking stick and the Sink Grail from 1-506th commander Col. David Clark at Camp Greaves on Thursday. Units headed to Iraq are storing many of their trophies and unit symbols until their return. (Seth Robson / S&S)

Staff Sgt. Ricky Bryant, left, of the 2nd Infantry Division Museum, receives Hitler&#39;s walking stick and the Sink Grail from 1-506th commander Col. David Clark at Camp Greaves on Thursday. Units headed to Iraq are storing many of their trophies and unit symbols until their return. (Seth Robson / S&S) 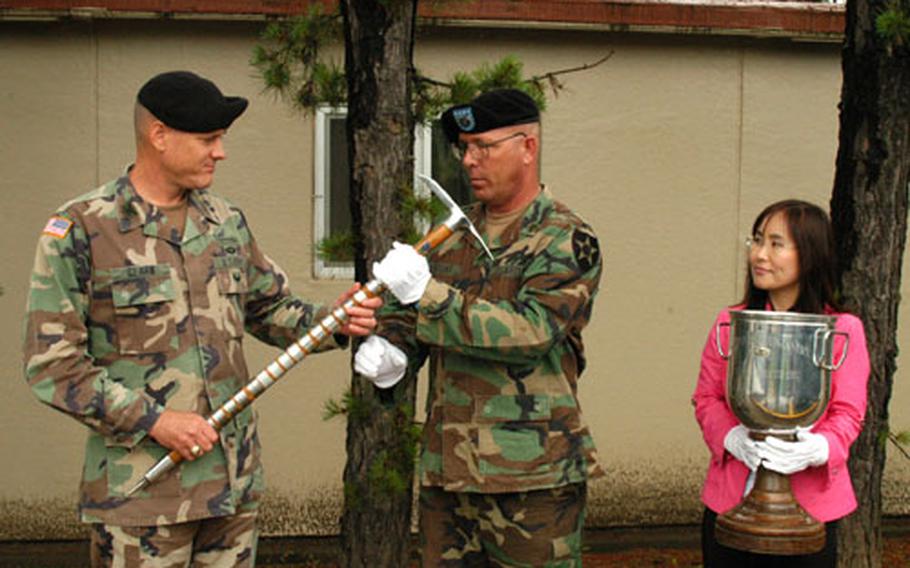 CAMP GREAVES, South Korea &#8212; Adolf Hitler&#8217;s walking stick and a grail made from his silverware and dining table are among hundreds of trophies that Iraq-bound units from the 2nd Infantry Division are placing in storage during their deployment.

Staff from the 2nd ID Museum visited Camp Greaves on Thursday to collect the Hitler relics from the 1st Battalion, 506th Parachute Infantry Regiment &#8212; part of the 2nd Brigade Combat Team deploying to Iraq for a one-year tour later this summer.

The battalion had the items on display at its base near the Demilitarized Zone since arriving there in 1987. The 1-506th&#8217;s collection includes dozens of plastic sports trophies won by the unit in South Korea, a large Japanese cannon and a World War II-vintage machine gun mounted on a concrete post outside battalion headquarters.

&#8220;We are picking up artifacts from the different units that are deploying. Things that are significant to the units that they don&#8217;t want lost. They are going [to Iraq] for war. Stuff like this would probably end up getting damaged, destroyed or lost and they want to have it when they return,&#8221; he said.

The United States plans to withdraw 12,500 troops from the Korean peninsula, and it&#8217;s possible the 2nd Brigade units won&#8217;t return to South Korea at the end of their Iraq tours. So the museum may have to ship the trophies to another location, Bryant said.

The museum received a deluge of trophies from the deploying units this week, and staff members had to rearrange the collections to make space. One unit brought an entire truckload of memorabilia for storage, he said.

Some trophies will be placed on display while the units are in Iraq, Bryant added.

Hitler&#8217;s stick is kept in the Camp Greaves Mess Hall so soldiers can see it, he said.

&#8220;We have got a piece of history that the Currahees brought back from their last big mission in Europe,&#8221; he said.

On the table next to Clark stood the Sink Grail, named in honor of Col. Robert F. Sink &#8212; the 506th&#8217;s first commander. According to unit tradition, all incoming 1-506th officers must drink from the grail as a rite of passage.

The wood that forms the base of the Sink Grail is from one of the legs of Hitler&#8217;s dining table at the Eagle&#8217;s Nest; its handles are the reserve handles from a parachute that a 506th soldier used to jump into Normandy during World War II. It&#8217;s also decorated with Sink&#8217;s jump-wings and its bowl is made out of Hitler&#8217;s melted silverware from the Eagle&#8217;s Nest.

Clark said the World War II trophies are too important to take to Iraq.

1-506th will not have the laissez-faire attitude to taking trophies in Iraq that soldiers had in World War II, he said. Soldiers are not supposed to bring back war souvenirs from Iraq, but that hasn&#8217;t stopped items from ending up on e-Bay or President Bush taking his own souvenir &#8212; the pistol Saddam Hussein was carrying when he was detained earlier this year &#8212; which is kept at the White House.

Clark said the 1-506th will have to be careful about taking objects home from Iraq at the end of its deployment.

&#8220;There is a whole chapter in the &#8216;Band of Brothers&#8217; book dedicated to the Eagle&#8217;s Nest and what walked out of there. A lot of things were liberated in that war but our systems are more sophisticated to prevent that from happening today,&#8221; he said.

Incha Koslosky, 2nd ID Museum technician, said the only people authorized to bring back trophies from Iraq are those with the U.S. Army Center for Military History, which sends staff there to collect significant items.