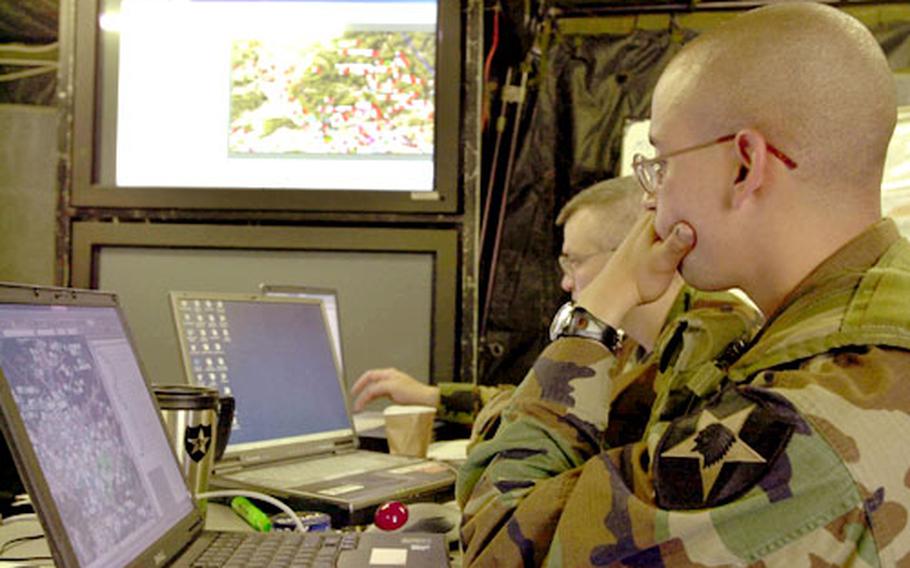 Sgt. Robert Gray (front) and 1st Lt. Stephen Sams work in the effects cell of the division headquarters Sunday during the Warfighter exercise, which tests the command and control of the division during a computer simulated war game. (Jennifer Svan / S&S)

Sgt. Robert Gray (front) and 1st Lt. Stephen Sams work in the effects cell of the division headquarters Sunday during the Warfighter exercise, which tests the command and control of the division during a computer simulated war game. (Jennifer Svan / S&S) 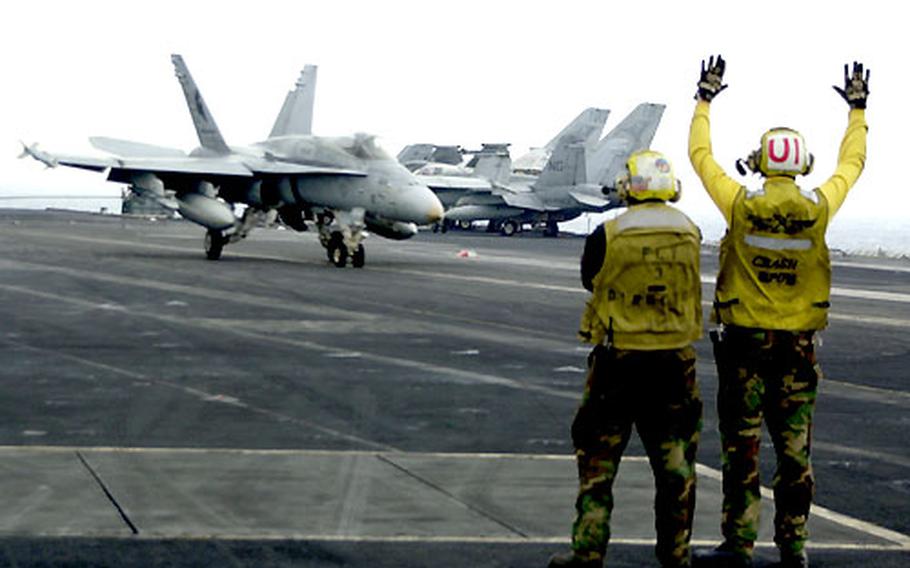 The 2nd Infantry Division&#8217;s chemical officer, who deals with responses to chemical weapons, put off a reunion with his family to extend his tour another month for the Warfighter exercise.

The exercise, conducted about every two years, is a huge computer-simulated war game testing the division&#8217;s readiness.

He could have changed duty stations and left his deputy in charge, but felt an obligation to stay on.

On Thursday, Gen. Eric K. Shinseki, Army chief of staff, will come to the 2nd ID as part of the overall analysis of the division.

It&#8217;s part of the Battle Command Training Program run out of Fort Leavenworth, Kan. The program runs exercises such as Warfighter to evaluate units.

Military gamers use complex computers to conduct a mock battle, with opposing-force gamers located in both Kansas and South Korea. No one dies and casualties register only on computer screens.

But division officers and senior NCOs get to practice the same decisions and judgments they&#8217;d have to make during war, said Maj. Curtis V. Roberts, deputy public affairs officer.

The battleground is the Korean peninsula, but the Warfighter isn&#8217;t focused on a conflict with communist North Korea, Roberts said: Weapons systems used against friendly forces are much more modern and applicable to any enemy worldwide.

Giving the opposing force the latest weapons systems &#8220;actually makes the division&#8217;s task of achieving its objectives that much more difficult,&#8221; he said.

As of Sunday night, the battle was going well, said Maj. Jim Hevel, chief of operations: Friendly forces cruised about 15 miles east, trying to flank enemy forces. They were using a deception plan, he said: sending cavalry forces west to try to make the enemy think that was their main thrust.

Cummings is the division staff&#8217;s deputy fire support coordinator. His job is to take out enemy artillery, using a combination of Multiple Launch Rocket Systems and Palladin artillery pieces.

The problem: The division artillery wasn&#8217;t killing all of the enemy&#8217;s artillery. The enemy continued to fire &#8212; at a slower rate, but with precision.

Wood advised that artillery pieces surviving initial attacks should be targeted when counterfiring. After a piece has fired, Cummings said, division forces can use radar signatures to pinpoint its location.

War is stressful, even when casualties are chalked up only on computers.

But for many soldiers &#8212; most of whom are stationed in South Korea without their families &#8212; the camaraderie runs deep, fueled by long hours and stressful situations. Estes would have it no other way, reminding his soldiers how good they are and guiding them to victory.