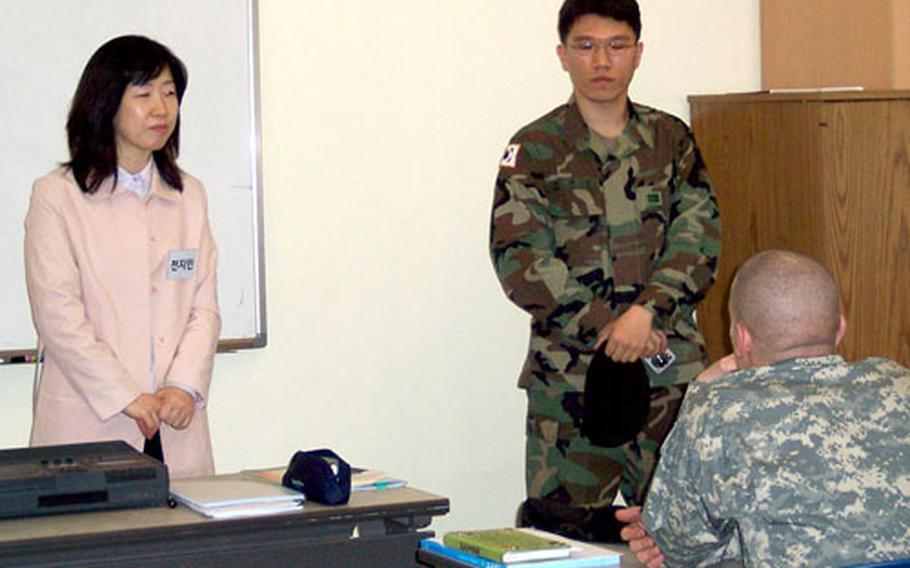 CAMP CASEY, South Korea &#8212; Like many U.S. servicemembers in South Korea, Spc. Jeremy Fox used a creative blend of English, Korean and pointing to direct taxi drivers when he first arrived in South Korea 16 months ago.

Fox and about 30 other soldiers will study those basics and more during a voluntary two-week Korean language and culture course sponsored by 2ID, the Yonsei University Cultural and History Program and the Gyeonggi Province Civil Military Team.

Soldiers ask many cultural questions, said Chun Jee-in, one of the two teachers from Yonsei University, during the first day of classes on Monday.

Common questions include why South Koreans often don&#8217;t say &#8220;excuse me&#8221; immediately after bumping into another person and why they sometimes ask very personal questions upon first meeting someone, Chun said.

Students will learn about those cultural quirks both in the classroom and on a field trip. They also will get a solid dose of history and plenty of reading and speaking practice.

The group was split into two classes of 15, with South Korean and U.S. soldiers available to interpret for the teachers.

Some students, such as Pfc. Joseph Underwood, have taken a University of Maryland University College Korean language course. Underwood, who is extending his tour another two years, said he was offered this course because he was one of the few in his unit who showed a keen interest in Korean culture.

Most soldiers who attended said they didn&#8217;t expect to become fluent in Korean, but they hoped they could learn enough to be more comfortable in their surroundings.

Pfc. Kirk McKean of the Material Retrograde Company, 702nd Battalion, has embraced the culture during his six months in the country, visiting cultural landmarks and a fishing village. He said he hopes that this class will bring him greater understanding and the ability to get a little closer to the culture.

Soldiers interested in taking other Korean language classes can do so for free through the Army Community Center, which offers beginner and intermediate classes three times a week at some bases.