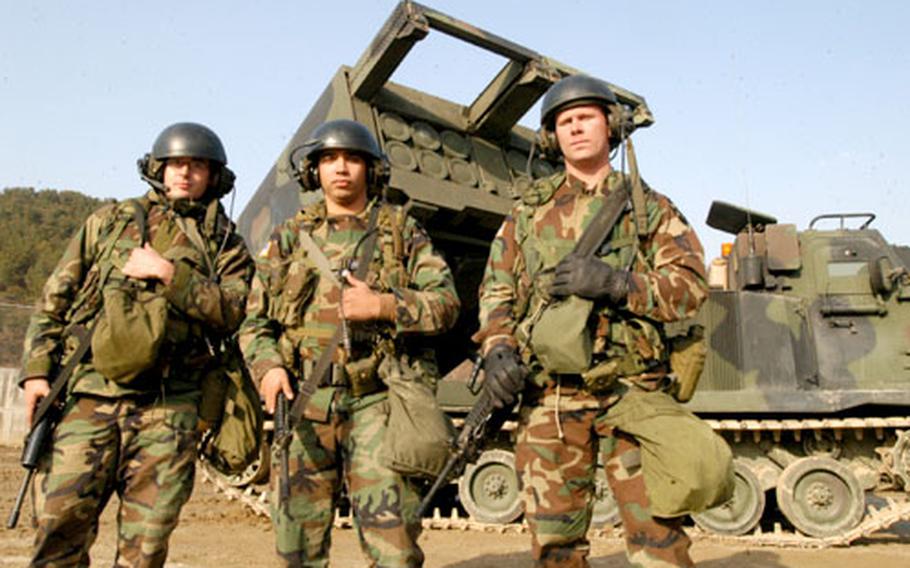 RODRIGUEZ RANGE, South Korea &#8212; Artillerymen from the 2nd Infantry Division are preparing to celebrate their patroness, Saint Barbara, whose name can be invoked to guard against explosions, lightning and sudden death.

According to legend, St. Barbara was the extremely beautiful daughter of a wealthy heathen named Dioscorus, who lived near Nicomedia in Asia Minor in the beginning of the third century. When her father executed her for becoming a Christian, he was struck down by lightning.

After gunpowder made its appearance in the Western world, Saint Barbara was invoked for aid against accidents resulting from explosions, an oft-needed plea since some of the earlier artillery pieces tended to blow up instead of firing their projectile.

&#8220;We don&#8217;t do fireworks, but we have a St. Barbara&#8217;s Day ball. We get together to celebrate the patron saint of artillery and keeping cannoneers and rocketeers safe in the development of their craft,&#8221; he said.

Rocketeers from 6-37 fired their multiple launch rocket systems (MLRS) at Rocket Valley, a range near the demilitarized zone separating North Korea and South Korea, this week.

The small patch of land blasted by the rockets is called St. Barbara&#8217;s Impact Area, Dawson said, standing beside an MLRS, hands tucked into his flak jacket in the manner of one of history&#8217;s most famous artillerymen &#8212; Napoleon Bonaparte.

The hard-bitten commander said he did not know if the North Korean artillerymen facing his men on the other size of the DMZ would celebrate St. Barbara&#8217;s Day.

If conflict erupted on the Korean Peninsula, 6-37&#8217;s job, in concert with two Republic of Korea army artillery battalions, would be to take out their North Korean counterparts, he said.

&#8220;The enemy artillery would either be identified through their firing or we could find them based on imagery and then we would fire against their artillery,&#8221; he said.

Each of 6-37&#8217;s MLRS units holds 12 rockets, and when the launcher has fired all of them another 12-rocket pod can be added in minutes, Dawson said.

The rockets carry hundreds of bomblets that disperse above the target to destroy everything within a wide radius. Calculating when to disperse the bomblets is so complicated it can be done only with a computer, he said.

The dual-purpose conventional munitions can take out a variety of targets, from lightly armored vehicles to troop concentrations, and they can suppress and have medium effects on tanks, Dawson said.

Another 6-37 officer, Battery C commander Capt. Brett Wiersma, 33, of Springville, Ala., helped fire the MLRS for the first time in combat in support of 5th Corps during last year&#8217;s Iraq invasion.

&#8220;We operated from Kuwait up to Tikrit. The most exciting day was the first day we shot. It was the first time the system had been used in battle. You train all this time and to get the opportunity to do your job was great,&#8221; he said.

The targets destroyed by the MLRS in Iraq are secret, he said.

&#8220;We were hitting targets that were very sensitive and secret in nature and we were not often told about the results of the missions. We shot at everything from field artillery to air defense and targets of opportunity. Seldom, if ever, did we see any Iraqis,&#8221; he said.

Many of the 6-37 crews shooting into St. Barbara&#8217;s Impact Area this week were being certified as ready for war, he said.

MLRS gunner Sgt. Kenneth Marrero, 27, of Los Angeles said he could not discuss the procedure for firing the rockets other than to say it finishes with the flick of a switch.

&#8220;It gives you a sense of power &#8212; like you are in charge,&#8221; said Marrero, who was barred from firing a skyrocket on July 4 in his native Los Angeles because fireworks are illegal there, he said.