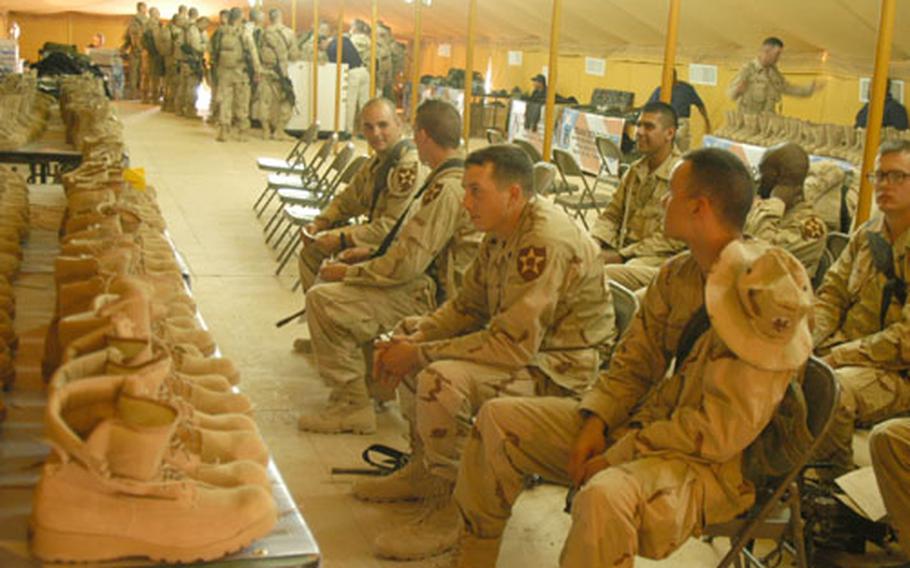 Maj. Kevin Korcheck, of the Nevada Army National Guard, played Santa. He handed out the gear but did not bother dressing up in a red suit, something that would have been foolish in the 110-degree F heat at Camp Buehring, where the Strike Force is preparing for its Iraq mission.

Some soldiers got additional specialized equipment such as telescopic sights and flashlights that attach to their weapons.

&#8220;It is equipment that is geared toward this theater. It is stuff soldiers normally buy for themselves,&#8221; Korcheck said.

Pfc. Adrian Cedillo of Company B, 1st Battalion, 506th Parachute Infantry Regiment had his arms full of new gear as he stood with other soldiers collecting equipment in a tent at Camp Buehring on Saturday morning.

The soldiers said many of them bought their own sights before they came to the desert.

Andrew Mizera of Company C, 2nd Forward Support Battalion, bought his own NC-Star telescopic sight for his M-16 before he left South Korea.

The sight cost $100 from johnmason.com, he said.

Another 2nd FSB soldier, Pfc. Sacarra Pusey, said the new Kevlar helmet, which features a reversible cover that changes from green to tan, is her favorite piece of new equipment.

Pfc. Arthur Waddle, a mechanic with 2nd FSB, preferred the Gerber, which is the third multitool the young soldier has owned. The first was a Leatherman, he said.

Next came his first Gerber that survived being run over by a truck but got lost.

Waddle plans to put his new multitool to good use.

Pvt. Jacob Hinds, also of 2nd FSB, said the new equipment is the sort of items, along with portable DVD players and lap-top computers, that many soldiers might have spent their last paycheck on in South Korea.

However, he was surprised to get the winter clothing, given the hot conditions in the Middle East.