2nd ID soldiers get qualified to light up the sky 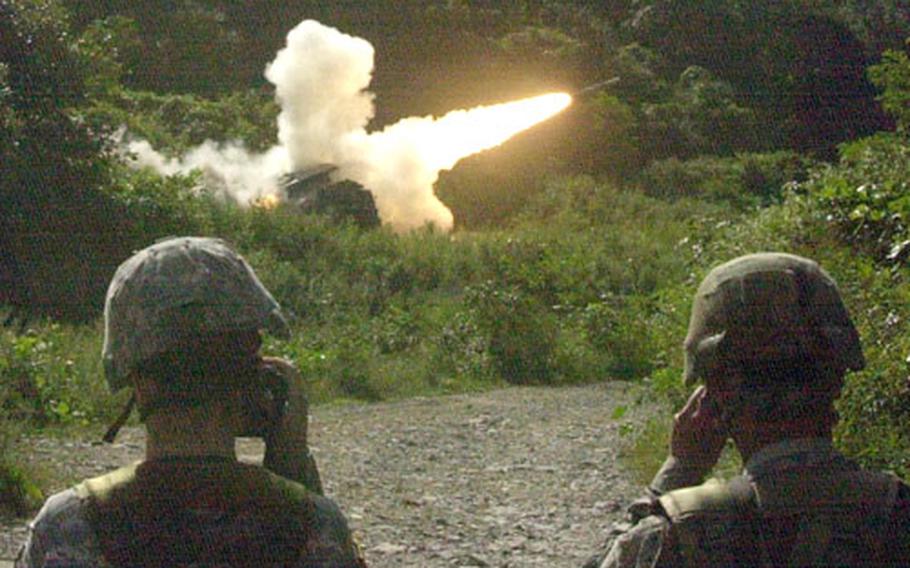 BOAR 1 TRAINING AREA, South Korea &#8212; In the world of multiple launch rocket systems, new responsibilities are just a seat away.

Army privates in the &#8220;13 Mike&#8221; specialty start off as drivers on the three-man crew of each tracked system vehicle, which can fire up to 12 rockets in one minute. If they perform their driving and maintenance duties well, then it won&#8217;t be long until they get the opportunity to fire the weapons that lit up the sky during the 2nd Infantry Division&#8217;s 1st Battalion, 38th Field Artillery&#8217;s qualification tests this past week.

The mentoring process also has benefited from supervisors who have directed, supplied or fired rockets in combat.

The crews receive data from a remote fire direction command post, where soldiers plot the impact area. They must factor in terrain, weather and enemy positions. The training rockets fly about nine miles, while the real thing flies about three times farther.

The vehicle crews are backed up by soldiers like ammunition section chief Staff Sgt. Clarence Duncan III, who also served in an MLRS vehicle in Iraq during the 2003 invasion.

His experience has helped him understand how to train the same way soldiers must fight, he said.

Safety rules still were followed at the start, Duncan said, but the war tempo meant determining whether to go ahead with a mission in less than ideal circumstances.

Soldiers say that battlefield knowledge, along with more frequent practice than the required biannual qualifications, has made younger soldiers better at a quicker pace.

A few soldiers say the excitement of all the smoke and fireworks wears off, but many, even among the senior enlisted, still get a childlike kick out of the seeing the rockets fly.