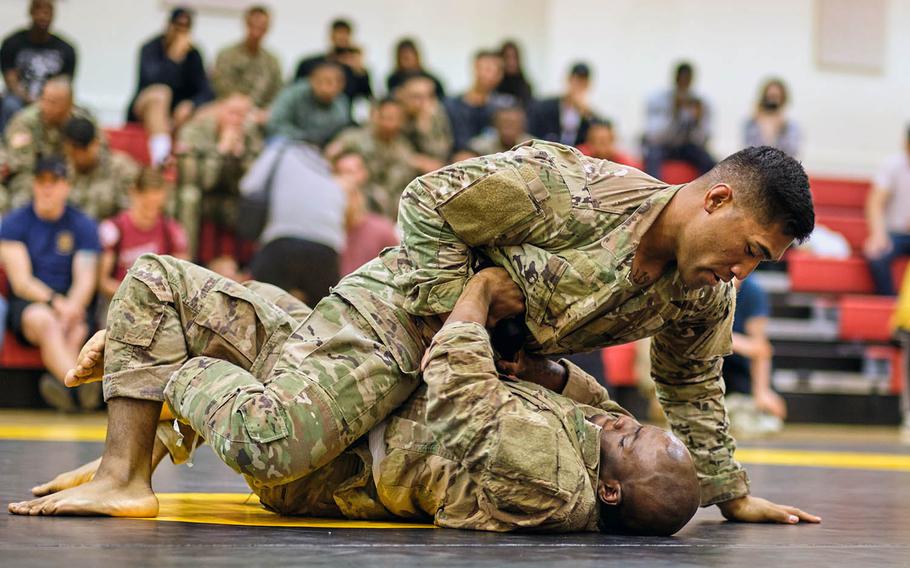 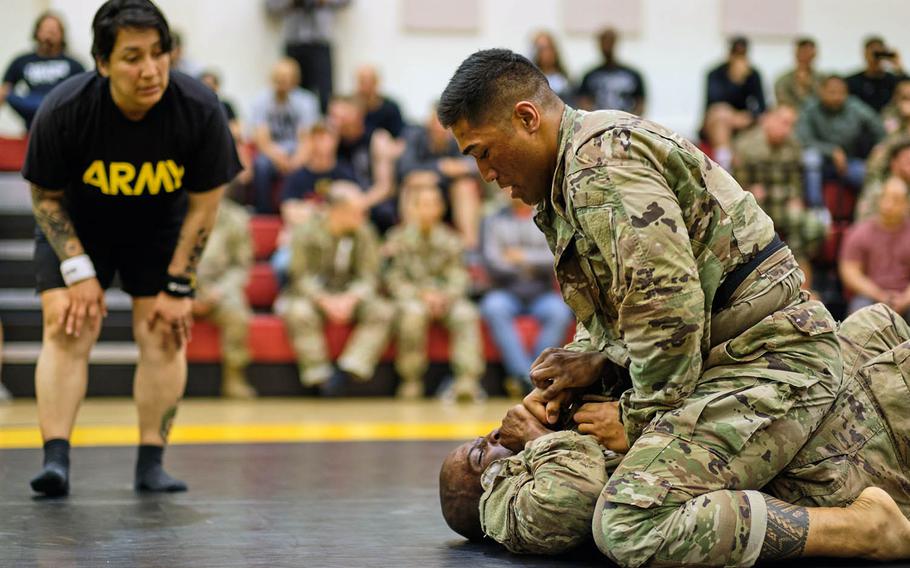 The tournament, which began Friday, will bring soldiers from all major subordinate commands under 2nd ID to Sitman Fitness Center on Camp Humphreys each week to determine who will advance to the next round and fight to be the first Friday Night Fights champion.

“We are bringing the soldiers in because tournaments like this build their resiliency, their confidence in each other and their readiness,” Sgt. 1st Class Matthew Dillon, the division’s operations noncommissioned officer, told Stars and Stripes on Friday.

“If a soldier has the confidence to go out there, toe-to-toe with someone they don’t know, overcome that fear of essentially being in hand-to-hand combat with an individual, it’s going to build their resilience, their self-confidence is going to grow,” Dillon said, “and they will be more resilient when facing tough times out on missions.”

Also, the tournament gives soldiers something fun to do, he said.

Hand-to-hand combat training helps to instill courage and self-confidence, according to an Army field manual. With competence comes the understanding of controlled aggression and the ability to remain focused while under duress.

Command Sgt. Maj. Phil Barretto, 2nd ID’s highest ranking enlisted servicemember, said the tournament is also a means for soldiers to relieve the stress they endure during their tour.

“It’s funny, we have had fights outside our gates, but we have been fighting ourselves,” he told Stars and Stripes. “Here is your outlet; bring it to the mat. Whoever wins, wins. You leave and shake hands.”

Thirty-four soldiers registered for the tournament debut, allowing for 17 bouts for the evening’s fight card.

“At work we are expected to act a certain way and say roger to everything,” said Spc. Matthew Murphy, of 2nd Combat Aviation Brigade. “When you’re on the mats you can express yourself and do what you’ve learned and trained for. It’s a good way to tap into energy that we can’t really release throughout a typical day.”

The tournament will advance in levels of difficulty and rules as it progresses each week. All of the rules of the tournament are in line with the U.S. Army Combatives School competition, rules and regulations.

Rounds one and two will consist of advanced combative techniques that focus on ground fighting, control and opponent submission. The third round and championship round will incorporate intermediate-level striking techniques.

“You may lose tonight, but come back and let’s do this again,” Barretto said. “The resiliency is to keep fighting to get back up, don’t stop because you lost. Keep fighting until you win.”