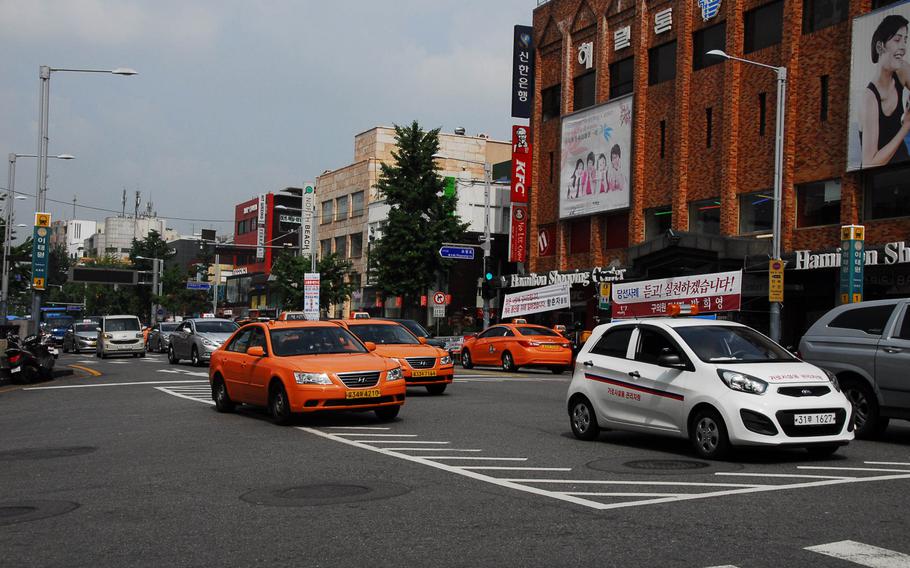 The soldier, a sergeant assigned to the 2nd Combat Aviation Brigade, stole the taxi around 1:37 a.m. on May 31, according to the Gangnam Police Station’s chief of criminal affairs. The vehicle was parked in front of a car dealership in Hannam-dong, a residential area of Seoul that is home to a number of U.S. military and civilian employees. The taxi driver was inside a convenience store at the time and had left the vehicle’s engine running.

The soldier’s name has not been released.

The alleged incident took place during the U.S. military’s 1-5 a.m. curfew. South Korean media are reporting that the soldier was trying to return to the base.

According to police, the sergeant then drove south of the Han River to the Gangnam area of Seoul, about three miles away, and hit a car stopped at an intersection. He abandoned the vehicle and tried to escape through an alley. He wrestled with a police officer who tried to stop him, scratching him and tearing his clothes, before being subdued.

The sergeant, who police say had a 0.158 blood alcohol level at the time of his arrest, told Korean police that he had been drinking in Itaewon before the incident and remembers little about what happened, though he admitted to driving the taxi.

He did not remember why he stole the taxi, but told police he wanted to apologize to victims.

The sergeant, who is stationed at K-16 Air Base on the outskirts of Seoul, is under suspicion of car theft, drunken driving and driving without a license. The chief said the soldier has yet to be charged, but prosecutors will begin reviewing the case in a matter of weeks.

Army officials did not provide information about the incident, saying it was still under investigation and that the soldier is in U.S. control.

A 2nd Infantry Division statement said the command is cooperating fully with the ongoing investigation, adding that U.S. soldiers are accountable to South Korean laws.

The “2ID will continue to work in complete cooperation with Korean authorities to ensure justice is served,” the statement said.

The alleged taxi theft is the second case of U.S. misbehavior in the past month to take place during the off-post curfew that applies to all U.S. Forces Korea troops.

Spc. Carl A. Lissone died on May 4 in Pyeongtaek following a brain hemorrhage sustained during a street fight that took place around 3:45 a.m. outside a Seoul nightclub. The U.S. military is still investigating his death.