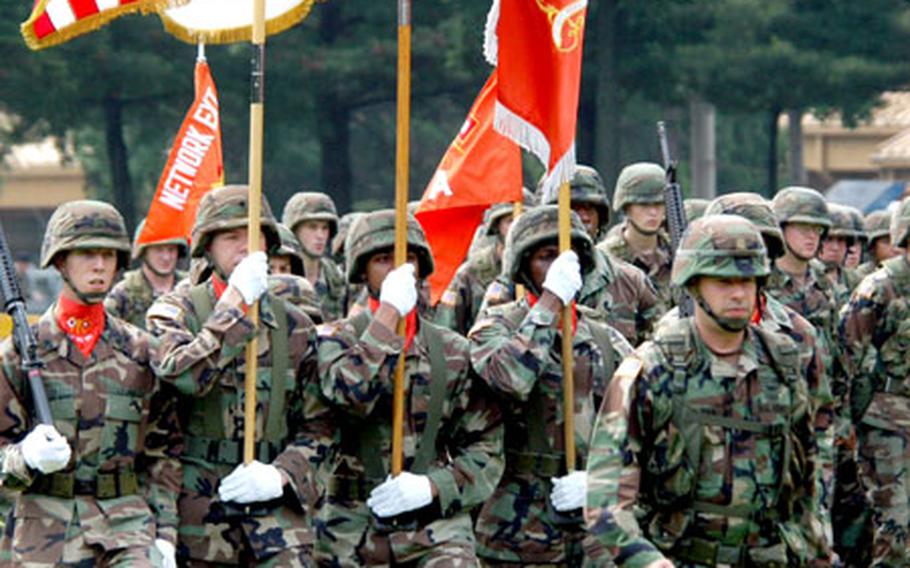 122nd Signal Battalion soldiers parade with their colors for the last time during an inactivation ceremony at Camp Red Cloud on Tuesday. (Seth Robson / S&S)

After the inactivation of 2nd ID&#8217;s 122nd Signal Battalion on Tuesday, Martz said that 2nd ID would increase the percentage of satellite communication systems its soldiers operate starting in 2007.

Personnel and equipment from 122nd have been transferred to other parts of the division as part of the Army&#8217;s move toward a modular force, Martz said.

&#8220;This battalion used to train its units and then move them out to other headquarters to fight. Now these units are permanently organized with the modular formation they are associated with. That helps us cut out time to deploy because we already are in teams,&#8221; he said.

Army transformation is built on treating the signal network as a weapons system. The division&#8217;s ability to view a common operational picture across its signal network allowed it to &#8220;see things first and act first,&#8221; he added.

&#8220;Our signal battalion has set the conditions for us to fight anywhere on this peninsula, day or night, in any weather conditions. They fully understand that we cannot fight and win where we cannot talk,&#8221; he said.

Pfc. Joshua Kerns, 21, of Xenia, Ohio, said he moved from the 122nd&#8217;s Company D to Company B, Special Troops Battalion, but that he is doing the same job as a radio transmission system operator and maintainer.

&#8220;We are basically like a telephone company for the different TACs (tactical operations centers),&#8221; he said.

Soldiers from the unit landed at Omaha Beach in France during World War II and fought in the Korean War, she said.

&#8220;We have all the same equipment and the same soldiers.

&#8220;We are doing the same mission with the same folks and the same equipment. We are just organized differently,&#8221; she said.