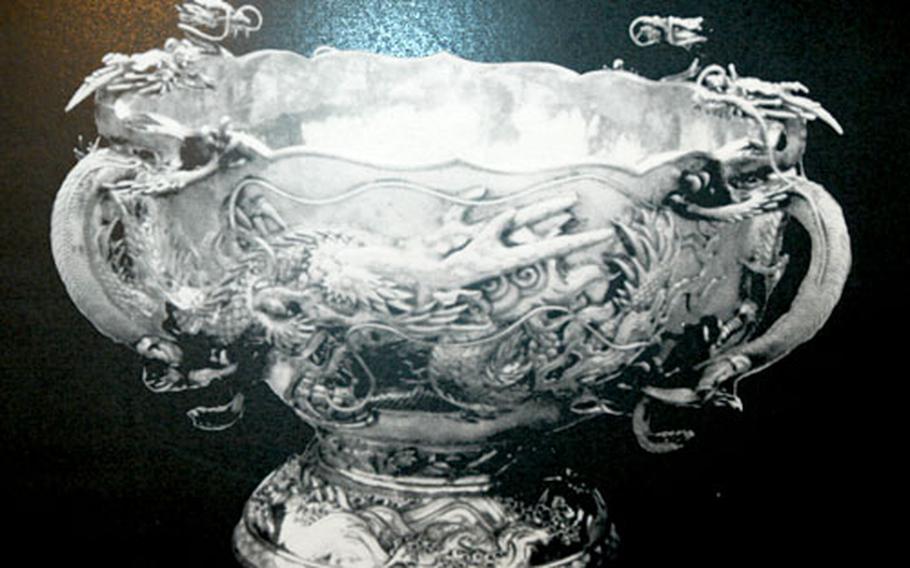 The Liscum Bowl, valued at $2.5 million, is the 2nd Infantry Division&#39;s most valuable trophy. It’s due to return from the States after a major restoration project, estimated to cost more than $30,000. (Seth Robson / S&S)

CAMP RED CLOUD, South Korea &#8212; The 2nd Infantry Division&#8217;s greatest trophy, the Liscum Bowl, will return to South Korea after more than two years&#8217; absence while it was restored in the United States.

Maj. Karl Ivey, 2nd ID spokesman, said last week that the silver punch bowl, which has been in America since 2003, would be back at the 2nd ID Museum at Camp Red Cloud by April.

According to the 9th Infantry Regiment&#8217;s Web site, the bowl is made from silver presented to the regiment by the Chinese prince Li Hung Chang in 1900 in appreciation for the unit&#8217;s actions at Tientsin to quell the Boxer Rebellion.

Arthur, Bond and Company of Yokohama, Japan, made the piece, which has four handles in the shape of imperial dragons as well as a ladle and a tray. Weighing 90 pounds, it holds 14 gallons.

The company that repaired the bowl, Creative Metalworks of Kensington, Md., states on its Web site that it is one of the largest silver objects ever made.

&#8220;One hundred years after its creation, the bowl was in dire need of restoration: dented, crushed and battered, full of lead solder from poorly executed prior repairs, and missing talons and other segments of the ornate dragons,&#8221; the Web site states.

Michael R. Schwartz of Creative Metalworks was selected for the restoration project by the Center for Military History.

Sterling silver patches were added where prior lead repairs had degraded the original silver beyond structural integrity. After all lead was excised from the bowl&#8217;s inner liner, numerous silver repairs were made with a torch and high-temperature silver solder. Then the inner liner was forged back to its original form.

Military officials have said the repairs would cost about $30,000.

Kuhn, the 2-9 commander, said he wanted the bowl back in time for the unit&#8217;s next Manchu Mile event in April. The Manchu Mile is a 25-mile road march that the unit conducts twice yearly, he said.

&#8220;The event builds esprit de corps and celebrates the 100-mile march that the regiment did when it conducted its first engagement in China,&#8221; Kuhn said.

The event, which must be completed carrying a rucksack and weapon, is open to any 2nd ID or 8th Army soldier. Those who complete the march, which typically takes eight to nine hours, are eligible to wear the Manchu belt buckle, Kuhn said.

After the Manchu Mile, officers from the unit traditionally gather to drink from the Liscum Bowl and welcome newly arrived officers, he said.