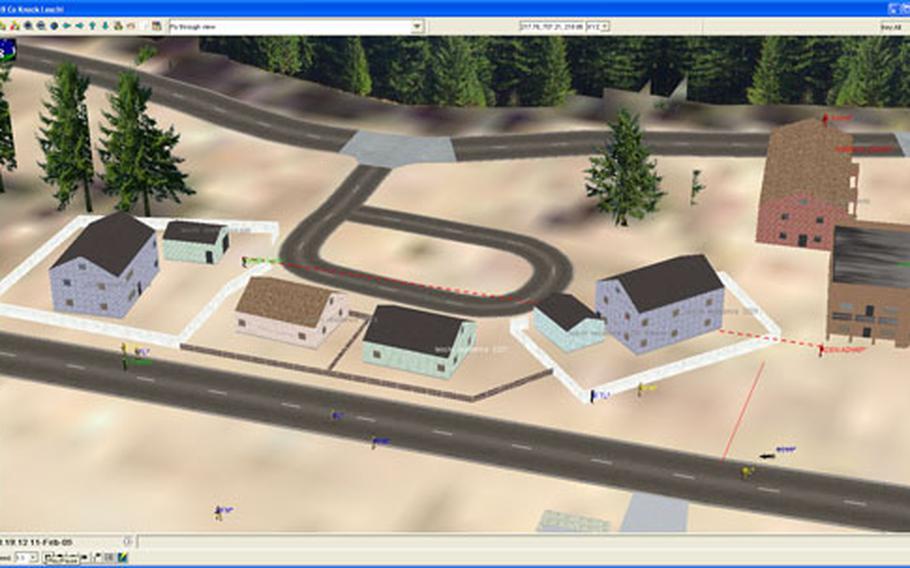 This screen image shows what the Initial-Homestation Instrumentation Training System looks like. (Courtesy of the U.S. Army)

RODRIGUEZ RANGE, South Korea &#8212; As the enemy tanks rumble over the clumps of muddy reeds patched throughout South Korea&#8217;s training areas, they also roll into a virtual world.

In the real world, the cavalry scouts eyeballing those tanks call for fire; in the virtual world, AH-64 Apache helicopters blow the enemy tanks to smithereens.

The virtual simulators, along with a new tracking system that shows real-time soldier movements, have brought never-before-seen advances to the 2nd Infantry Division&#8217;s 1st Heavy Brigade Combat Team as it conducts its brigade-wide Iron Focus exercise in Area I.

The 22 days of Iron Focus include about 2,900 soldiers training at nine Area I locations up to 40 miles apart.

Training in South Korea long has been limited by lack of space; it doesn&#8217;t have the vast swaths of country desert available at U.S. training grounds.

For all of the technological wizardry, some of Queen&#8217;s main goals for the exercise are as old as soldiering.

Officers get evaluated on their ability to command and control. Their evaluations are broken into eight categories, which include items such as working with operational orders and risk management.

At ground level, Queen wants to see how his soldiers will react to contact.

He has a new tool to help him do that, thanks to a five-year $71.7 million contract that the Army awarded to Cubic Defense Applications.

In July, the 8th Army was the first to receive the portable Initial-Homestation Instrumentation Training System, or I-HITS.

I-HITS shows 2-D satellite footage and creates 3-D models of all terrain and buildings, then adds icons for each foot soldier and vehicle in a battle. Commanders can identify soldiers by name as they engage opposing forces.