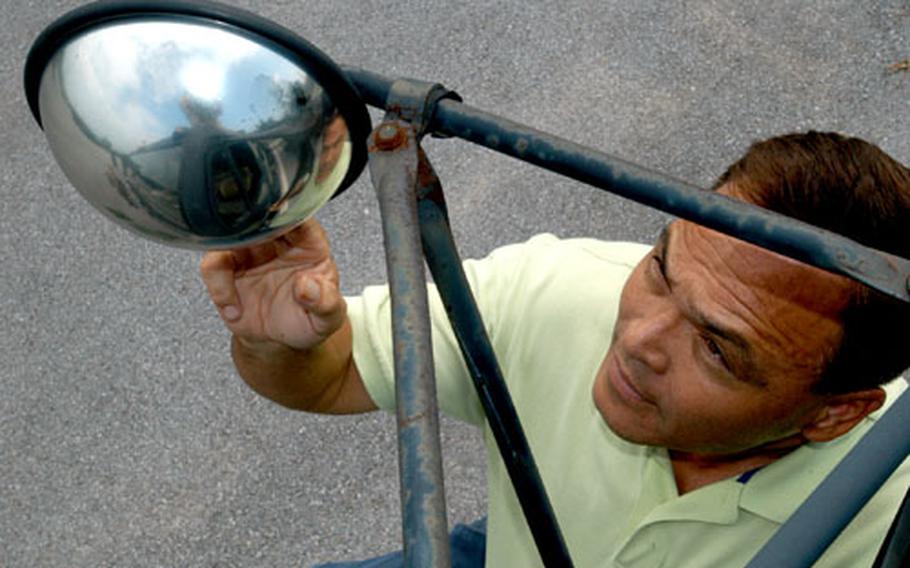 Second Infantry Division safety officer Denver McClintock inspects one of the new mirrors that all large 2nd ID vehicles must have so that drivers can see pedestrians walking below. The mirrors are part of a group of safety measures implemented after a U.S. military vehicle struck and killed a South Korean woman last month. (Seth Robson / S&S)

An order issued by 2nd ID commander Maj. Gen. George A. Higgins in response to the June 10 accident states that State Highway 3, which runs through the South Korean city of Dongducheon, is permanently off limits to U.S. military vehicles.

Denver McClintock, 2nd ID safety officer, said Friday that signs will be erected to inform soldiers that the road is off limits.

Military police and safety officers will patrol the area to ensure no U.S. military vehicles stray onto it.

Guidelines issued as early as 2002 advised soldiers not to use the road, McClintock said, but 2nd ID&#8217;s high troop turnover meant that most soldiers were unaware of the advice.

Factors that made the road a problem for military vehicles included increasing numbers of pedestrians in Dongducheon, and more parked cars effectively reduced the road from four lanes to two, McClintock said.

Military vehicles must now take an alternative route along a riverbank to the west of Dongducheon, he said.

Safety officers have identified Camp Casey and the streets surrounding it as the place where most accidents within 2nd ID occur, he said.

The division also has placed the road linking camps Casey and Mobile off limits to large vehicles.

Yangju Police said they also are looking into an April 11 accident that left a South Korean woman with serious head injuries after she was struck by a U.S. military vehicle while riding a moped in Dongducheon.

Division statistics show that for the first five months of fiscal 2005 there were 59 ground-vehicle accidents, compared with 112 for the same period in fiscal 2002.

Division officials would not release the latest safety statistics, but McClintock said that &#8220;on a scale of green, amber, red, the division is an amber.&#8221;

Higgins&#8217; order, which came in response to last month&#8217;s accident, also states that large 2nd ID vehicles must have fish-eye mirrors mounted at the front so drivers can see pedestrians walking below.

If large military vehicles need to move in reverse off post, the tactical commander must act as a ground guide, McClintock said.

Higgins&#8217; order also establishes an inspection point at Kwangsa-ri, an ammunition depot next to State Highway 3 south of Dongducheon, where inspectors can flag down U.S. military vehicles to check safety compliance.

&#8220;A lot of soldiers who come to the division are straight out of basic training and have never had a POV (personally owned vehicle). The master drivers will key into that and make sure they are trained extensively.&#8221;